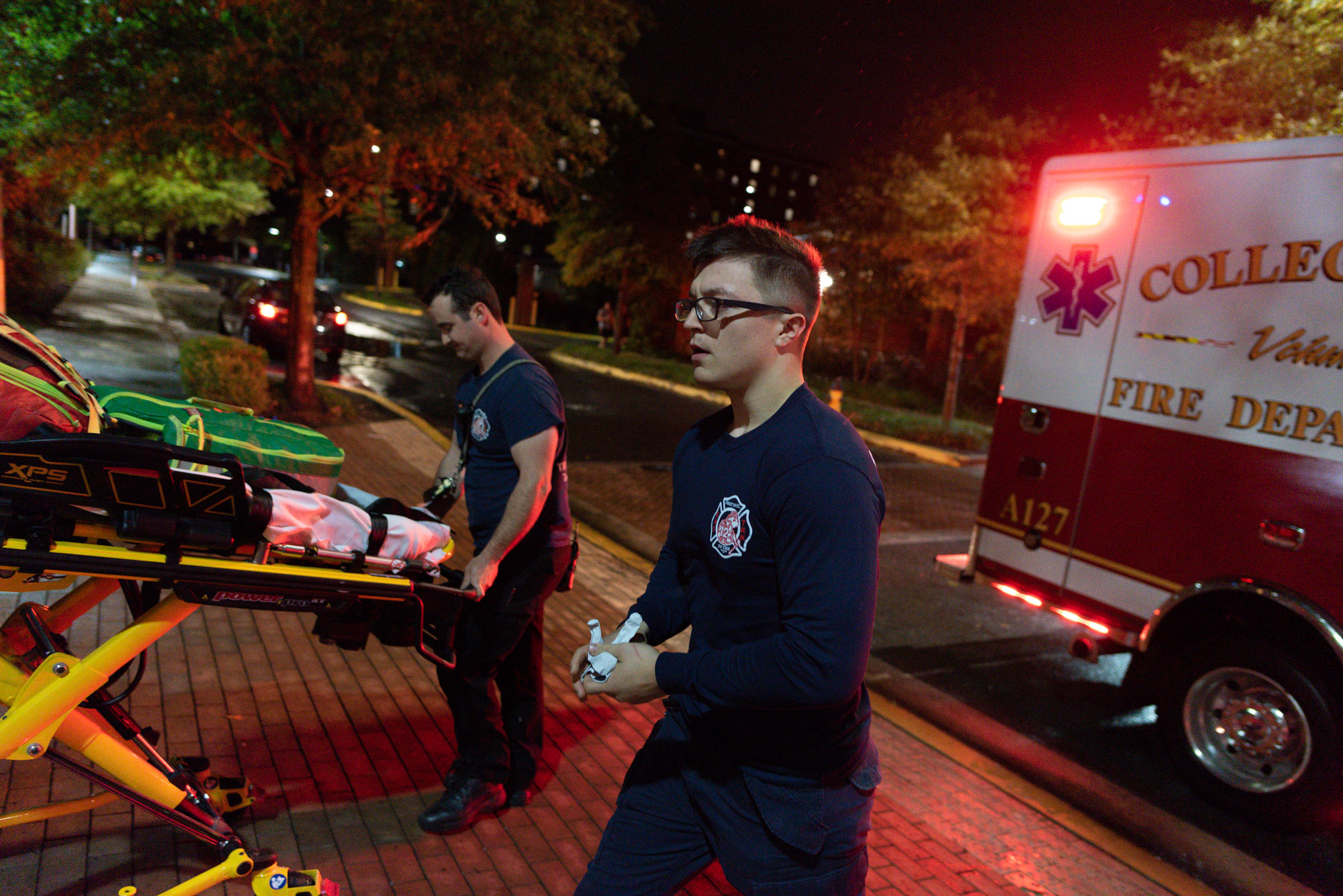 That is, until four tones sounded out from speakers overhead. The building fell silent. A second musical queue followed: it was a call for an ambulance dispatch.

A student on campus was complaining of chest pains. Within seconds, Nibali, a junior computer science major, and two other students from the department were on Route 1, speeding toward the campus.

The students who volunteer at the fire department have to balance two very different jobs. In the morning, they go to classes on campus. But from 3 p.m. to 7 a.m. on workdays, they are emergency responders, taking over as the career staff goes home for the day. Most of them live inside the station, where they must be ready to spring into action at a moment’s notice.

Sophomore Maddie Walstrum grew up in California, and wildfires were always a part of her life, she said. So, when she came to this university she chose her major — environmental science and policy — with an interest in preventing that kind of devastation.

It was a natural step to her, then, to look for an opportunity to volunteer as a firefighter. One big draw for her was that she would be joining a group of students her age: Almost 20 university students eat, sleep and study at the station.

Walstrum joined the station this summer with several other students. The training they underwent from June to August quickly brought them together.

[Read more: “I can’t be without these people”: A UMD singing group forges lasting friendships]

“We went through hell together,” she said. “Our drills are very, very grueling.”

One drill involved carrying 30-pound “shoulder loads” of hoses up many flights of stairs while wearing 75 to 80 pounds of protective gear.

This training is for students interested in firefighting, who must also undergo state EMT certification. But students also have the option to serve exclusively as EMTs.

“We all got really close really fast,” she said. That tends to happen, she added, when you’re with the same people 24/7, working and doing assignments for classes together.

Students at the station work in shifts: two days on call, followed by two days off. And emergency calls, come at all hours of the day and night, each accompanied by those inescapably loud tones blasting from the speakers. On busier days, that can mean waking up several times a night.

The key is taking naps and sleeping in on your off-days, said Erik Ridings, a junior environmental science major. The biggest change Ridings has noticed in himself since joining the department is how he spends his free time, he said.

“Mostly, I’ve just found that it kind of takes over my extracurricular life,” he said.

Ridings used to be in the boxing club. But he now needs his evenings to be on call or to salvage his little remaining free time, he said, so he dropped the club.

Even when they’re off duty after a long shift, many volunteers are still itching to go out on calls. If it’s a particularly slow night, they will go out in an engine to the areas that get a lot of calls just to check it out.

The dispatch system tracks the location of each fire truck, so by getting closer to the action they make it much more likely they will be called upon in case of an emergency. Many of the volunteers even have an app that sometimes notifies them of dispatches just before the loudspeakers do, in hopes they can get closer to the action that much sooner.

When the calls do come in, there is a stampede of footsteps racing for the garage where their firefighting gear is ready to go. At the beginning of each shift, each volunteer places the bottom half of their suits at the base of their assigned engine. The pants are pre-fitted around each boot, so it’s just a matter of stepping into them and pulling up the pants in a few quick motions.

The time saved can save lives. But it’s also a race: there are only a certain number of seats in each engine so the slowest off-duty volunteers risk missing out. And it can get a little boring waiting around in the station.

The volunteers come away with all sorts of stories. Many amusing or funny, like when several volunteers got stuck in an elevator and had to call their fire department for a rescue. The irony of trapped firefighters needing a rescue was not lost on them.

Ridings, a certified EMT, said he has arrived to scenes to find the person in question has already died. Even in situations where he is able to help someone — by performing CPR, for example — he doesn’t always know what happens to them. They leave his ambulance, and sometimes that’s it.

Nibali got out of the back of the ambulance when it arrived at its destination in North Campus. Ridings, Nibali and another student volunteer hopped out of the vehicle and pulled out a stretcher. They worked alongside the paramedics who accompanied them in another emergency vehicle. Generally speaking, two vehicles are dispatched for calls that involve chest pain, which is a symptom of cardiac arrest.

His work done, Nibali got back into the ambulance. He finally had a free moment for a question: what is it like to help other students in their times of need?

“It’s really cool,” he said. “You’re doing it to help the community, but it’s just another step of community outreach when you’re a part of that campus community as well.”