“I can’t be without these people”: A UMD singing group forges lasting friendships 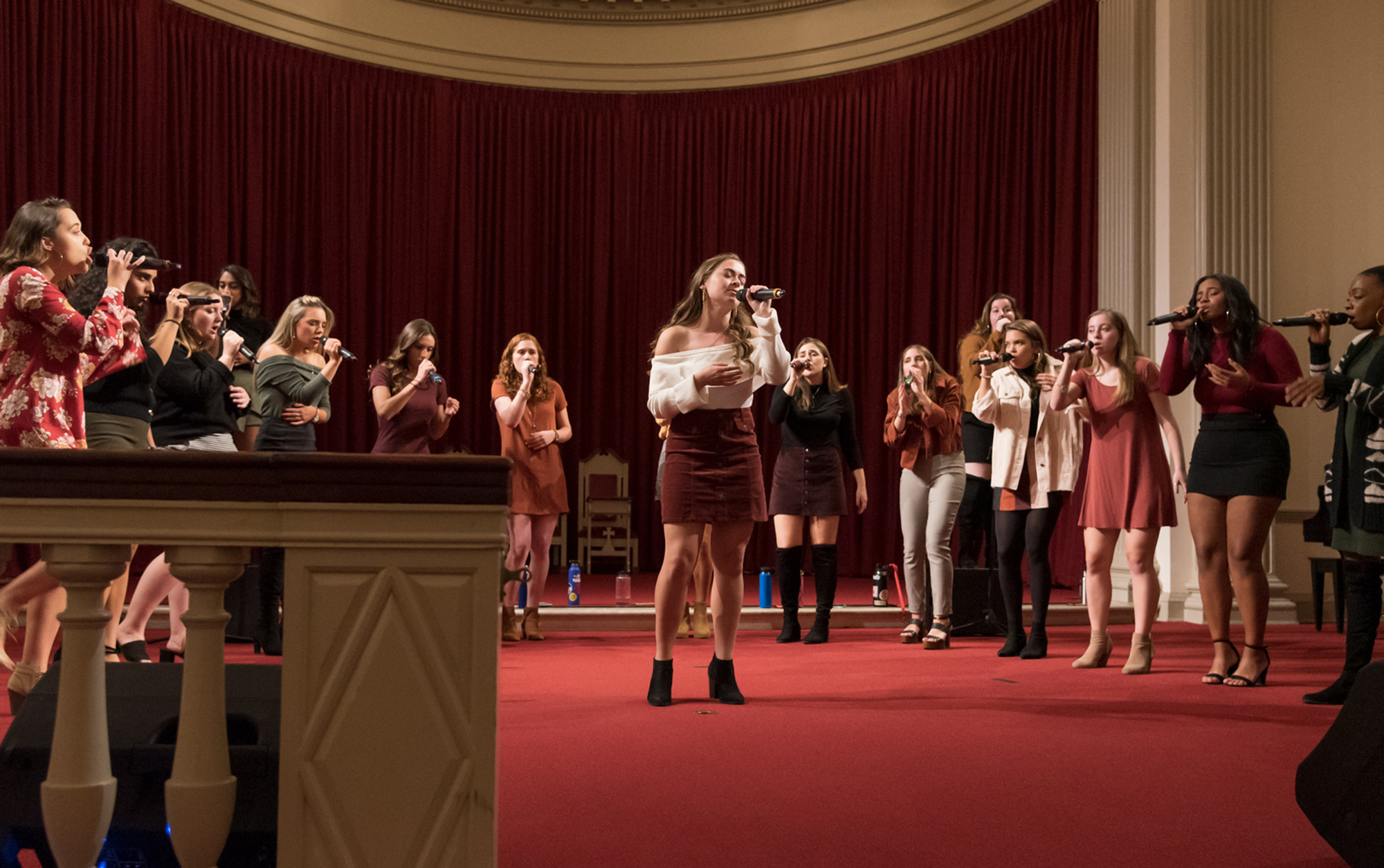 Isabelle Dyson, a sophomore criminology and criminal justice and psychology major, sings with the UMD Treblemakers during their reunion show on Oct. 18. (Matt McDonald/The Diamondback)

Isabelle Dyson stood at center stage in front of dozens of people at the University of Maryland’s Memorial Chapel. It was just moments before her first solo performance with her a cappella group, members of which stood curved into a crescent behind her.

One member counted the song in, and a chorus of ooh’s and vocalized beats swelled up around her. Dyson moved with the sound, bringing the microphone to her lips.

The nerves threatened to overwhelm her, but she closed her eyes and took a breath. She imagined she was back in the basement of Jimenez Hall — that the performance was just a regular rehearsal — and began to belt out “Dead Man’s Arms” by Bishop Briggs.

The Treblemakers — or “Trebs,” as many members call the group — had their 30th anniversary reunion show on Friday, an event that brought current and former singers together onstage. Its members say the club is an artistic outlet, a support group and a tight-knit family all rolled into one.

“We all have a bond of music, but it’s more than that,” Dyson said. “Everyone actively cares about each other.”

Leading up to Friday’s show, the group had a rehearsal marathon they fondly call “hell week.” The intense practicing period culminates with the “infinity rehearsal” the night before a show when the members practice for around eight hours, often stretching into the early morning.

They don’t seem to mind putting in the time, though.

Shannon Turco, a junior physiology and neurobiology major, said even when the pressure of an upcoming performance looms, their practice sessions sometimes dissolve into laughter.

“It’s so irritating. It isn’t productive,” she said. “But you wouldn’t for the life of you ever tell them to stop. Because it makes rehearsal fun.”

The group holds two-hour practices three times a week and competes annually at national competitions. They recorded their first album, Roots, in 2017, and they’re currently fundraising to be able to record another.

When Turco joined the group, she said she was “really quiet” all the time and didn’t feel like she belonged. It came to the point where she almost quit, but her mom encouraged her to stick with it for a while longer.

Turco realized the strength of the community when the Treblemakers swooped in to help her after a “crisis moment” with her then-boyfriend.

“Three of the girls were like, ‘Let me take you back to my place,’” she said.

They got Turco out of her sweatpants, dressed her up with clothes from their closets, put makeup on her and hauled her outside for a night of fun.

“That was the moment that I [thought], ‘I can’t be without these people,’” she said.

Treblemakers alumni arrived before Friday’s reunion show, including members spanning the group’s entire 30-year history. Many current and former members met for the first time as they practiced out in the parking lot next to the chapel. Under the streetlights, the group sang, danced and laughed together.

On stage, they all joined in for a set of songs from the Treblemakers’ repertoire. It ended with Salt-N-Pepa’s 1993 hip-hop hit “Whatta Man.” Everyone put their hands in the air and bobbed their knees as current and former members took turns doing solos. At the end, they linked arms and took a bow.

When the show ended, the members lingered, postponing their goodbyes.

Dyson, who had her first solo that night, said she never expected a music group would mean so much to her.

During auditions, she immediately sensed she could trust everyone. Even though she barely knew them, she thought to herself, “I could tell these people anything right now.”

For Kirsten Brandler, who joined the Treblemakers in 2004 and has been to several of the reunion shows that happen every five years, that wasn’t surprising.

“There’s just this very cool thing about being in Trebs,” she said. “Whether you sang with someone in your time in the group or not, you get on stage and you feel like you’ve known them forever.”