A Michigan beat writer breaks down the No. 14 Wolverines 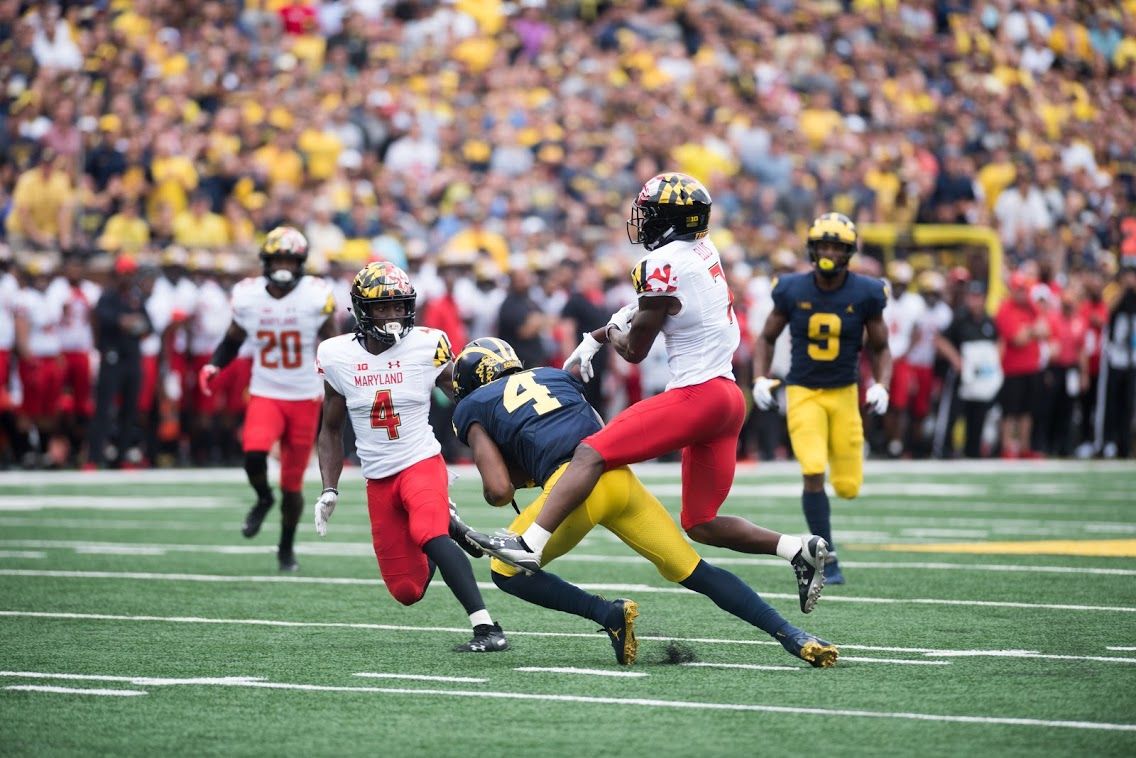 Wolverines wide receiver Nico Collins makes a catch in front of defensive back Tino Ellis during No. 15 Michigan’s 42-21 win over Maryland at Michigan Stadium on Oct. 6, 2018. (Emma Richter/Michigan Daily)

Maryland football has taken a significant downturn, losing its last three games, including a 42-point drubbing on the road against then-No. 17 Minnesota last week. It’s homecoming week at Maryland, and the schedule isn’t looking any easier as the No. 14 Michigan Wolverines come to College Park.

Before Saturday’s matchup, we spoke to Aria Gerson of The Michigan Daily to find out more about the Wolverines. Our conversation has been lightly edited for clarity.

The Wolverines are coming off a statement 45-14 win over Notre Dame. Will Saturday be a letdown game in any aspect or should we expect another performance of that dominance?

I wouldn’t be surprised if this game isn’t as dominating as the Notre Dame game for two reasons. The first, I wouldn’t exactly call a letdown aspect, but Michigan has a bye next week before playing Michigan State, then Ohio State two weeks after and I could see them looking ahead to those games more than Maryland. The second is that Michigan is not a very good road team. They still beat the teams they’re supposed to beat on the road, but they don’t dominate the way they do at home.

How would you assess Shea Patterson’s performance this season, with just over 1,600 passing yards and a 57.01 completion percentage?

Shea Patterson had surprisingly lackluster performances in the first few games of the season. He struggled with ball security and wasn’t nearly as accurate as he was last season. But he suffered an oblique injury in Michigan’s season opener and said last week that the Penn State game was the first time he was at 100 percent. Not coincidentally, that and the Notre Dame game were his best two games of the season, and he’s become part of the running game again as he was last year. So it’s hard to judge his performance by his numbers. I’d expect a similar Patterson to who Maryland saw last year.

Michigan’s defense has been its biggest x-factor so far this season, giving up around 18 points per game and 270 yards of total offense. Which players, in particular, have really helped the Wolverines’ defense click and should we expect them to have big games on Saturday?

Cam McGrone has been a revelation. A redshirt freshman linebacker, McGrone brings sideline-to-sideline speed and can act as a pass-rusher, a spy for the quarterback and more. He’s helped replace the production Michigan lost when Devin Bush left for the NFL and there’s no reason that shouldn’t continue against Maryland. More generally, Michigan’s pass rush has been a strength of the defense. Don Brown loves to run blitz packages and has several players that he will blitz, including McGrone, linebacker Josh Uche and defensive ends Aidan Hutchinson, Kwity Paye and Michael Danna. Paye and Hutchinson were tasked with filling the shoes of Rashan Gary and Chase Winovich and have done so as well as anyone could’ve expected.

Who is a player on offense that could break out against the Terps that people aren’t talking about?

I don’t know if you could call it a “breakout game” if he has a big game against Maryland since he sort of already had one against Notre Dame, but Hassan Haskins has been a revelation at running back. People talk about Shea Patterson and the talented receivers, but the run game has been more ignored as it’s started to play a larger role in the offense. Freshman Zach Charbonnet is Michigan’s top back, but Haskins is significantly more under the radar. After starting the season as the fourth-string running back, he now seems to be the Wolverines’ second option. He had three rushes of 20 or more yards against Notre Dame and has proven skilled at breaking through tackles, even hurdling an Irish defender. A redshirt freshman, Haskins is still on the rise and could give Maryland’s defense trouble.

Michigan will win if…

Michigan will win if they don’t make any major mistakes. This is a more talented team and aren’t dealing with any significant injuries. The Wolverines won’t have to light the world on fire to win this game, but they also can’t beat themselves.

Maryland will win if Michigan is caught looking too far forward to Michigan State and Ohio State and reverts to the sloppy ways they showed early in the season. There’s not too much even a great defense can do if there are a few too many turnovers that give Maryland the ball with good field position.