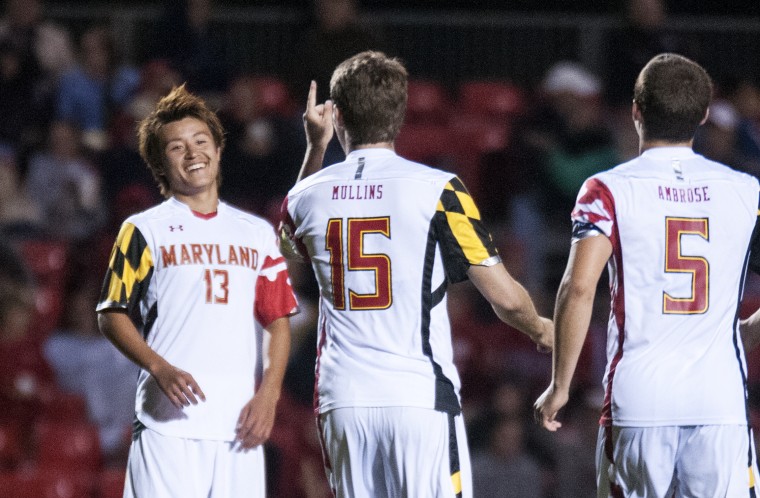 Patrick Mullins (15) celebrates with Tsubasa Endoh (13) after Mullins scores his second goal of the game against Georgia State on September 24, 2012 at Ludwig Field. (File Photo)

Why is this significant? A few former Terps helped guide Toronto FC to a third conference finals appearance in four years.

Midfielder Tsubasa Endoh and forward Patrick Mullins both played in the match, both recording shots on goal. The two each played four seasons with the Terps, Endoh from 2012-2015 and Mullins from 2010-2013. Endoh was selected ninth overall by Toronto in 2016 and Mullins was selected 11th overall by the New England Revolution in 2014.

On the season, Endoh played in 15 matches for Toronto and had a career year. He netted three goals and two assists, which were both career highs. Endoh had struggled in his first three professional seasons and was sent down to third-tier Toronto FC II for all of 2018. 2019 saw him come back into the Toronto FC squad and establish himself as a capable MLS player.

Mullins played in eight matches for Toronto this year, scoring two goals, after being traded midseason from Colombus Crew SC. Mullins has been a career journeyman, having played for the New England Revolution, New York City FC and D.C. United before joining the Crew in 2018.

Not appearing in the match for Toronto was arguably one of the best players in Maryland history, center back Omar Gonzalez, who won a national title with Maryland in 2008.

Toronto FC awaits the winner of Atlanta United FC and the Philadelphia Union, who play Thursday night at 8:00 p.m. EST.