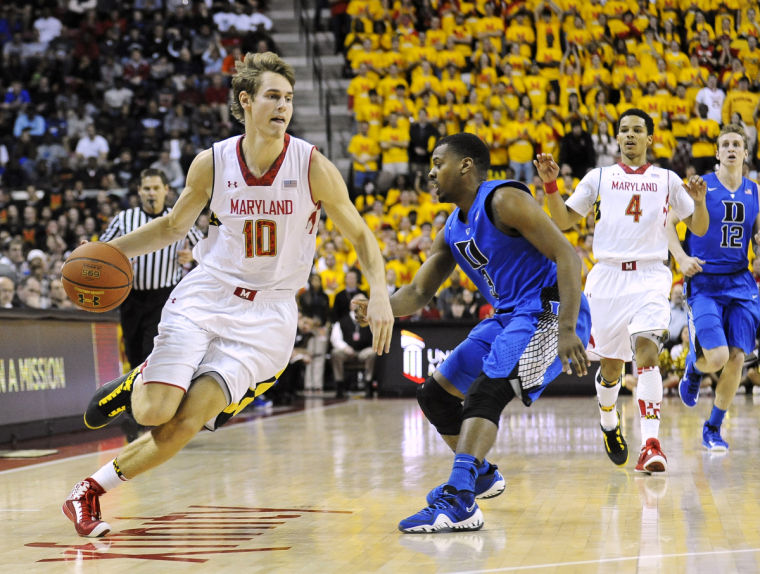 Forward Jake Layman drives towards the basket during Maryland's 83-81 win over the Duke Blue Devils on February 16, 2019. (File Photo)

After signing with the Minnesota Timberwolves in the offseason, former Terp Jake Layman debuted for his new team Wednesday.

Layman came off the bench and registered 23 minutes played, which was the sixth-most for the Wolves. Many had thought that Layman could challenge for a starting spot, but both Treveon Graham and Andrew Wiggins got the nod over him.

Layman proved himself to be a good wing scoring option in Minnesota’s 127-126 overtime win over the Brooklyn Nets. He shot 4/7 from the field and 2/4 from behind the arc. He was used as a wing/forward hybrid, which allowed him to get unique looks from three.

With the added pace, there won’t be many specific play sets — particularly for non-KAT players.

I did really like this action, tho. Jake Layman disguises himself as corner-3 guy, but launches off fake backscreen he sets, and is further freed by KAT’s screen.

Along with the points, Layman grabbed two rebounds, an assist and a block. He was +8 while on the court, which helped offset some bad performances from their starters.

Minnesota head coach Ryan Saunders trusted Layman’s defense on the last play of the game, substituting him in to guard Caris LeVert.

Before this play, Robert Covington said he and Ryan Saunders had a conversation about subbing Josh Okogie and Jake Layman into the game to defend Kyrie Irving and Caris LeVert.
pic.twitter.com/lcjD8TpeOk

Although LeVert did not take the final shot, he still had 20 points on the night and was a big offensive threat for the Nets.

After a promising debut, there is much to come of Layman’s time in Minnesota.