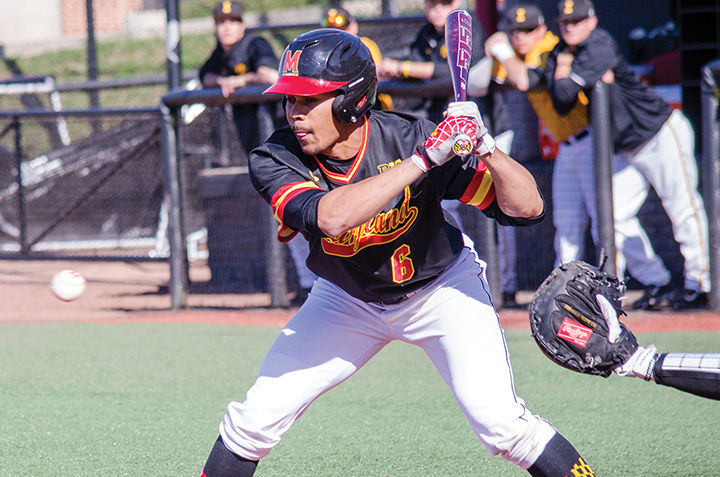 Outfielder LaMonte Wade looks for his pitch during Maryland's 1-3 loss to Iowa to tie the series 1-1 at Shipley Field on April 11, 2015.

The 2019 MLB season is still in progress, with the World Series underway as of Tuesday night.

For the 28 teams who didn’t make it, the offseason has now begun, and that includes a few Maryland baseball alumni.

No former Terps reached the World Series this year, but two played in the playoffs and three were on playoff teams.

One made his way back to College Park to prepare for the 2020 season. LaMonte Wade Jr. was seen on campus Tuesday, taking some cuts in Maryland’s indoor batting cage.

Wade played three seasons for the Terps from 2013-2015 and was part of both NCAA Super Regional teams in 2014 and 2015. The outfielder was called up by the Minnesota Twins earlier this season and bounced around between the MLB and Triple-A Rochester.

He was part of the Twins’ AL Division title-clinching celebration in late September but was not included on the ALDS roster.

It wouldn’t have mattered much, as the Twins were swept by the New York Yankees. This continued a streak of 16 straight playoff losses for Minnesota, with the last 13 of those coming at the hands of the Bronx Bombers.

Wade already has his mind set on next season with the hopes of ending that playoff-loss skid and making a name for himself, and it started yesterday in College Park.