As Nebraska dominated, Maryland volleyball plagued itself with service errors 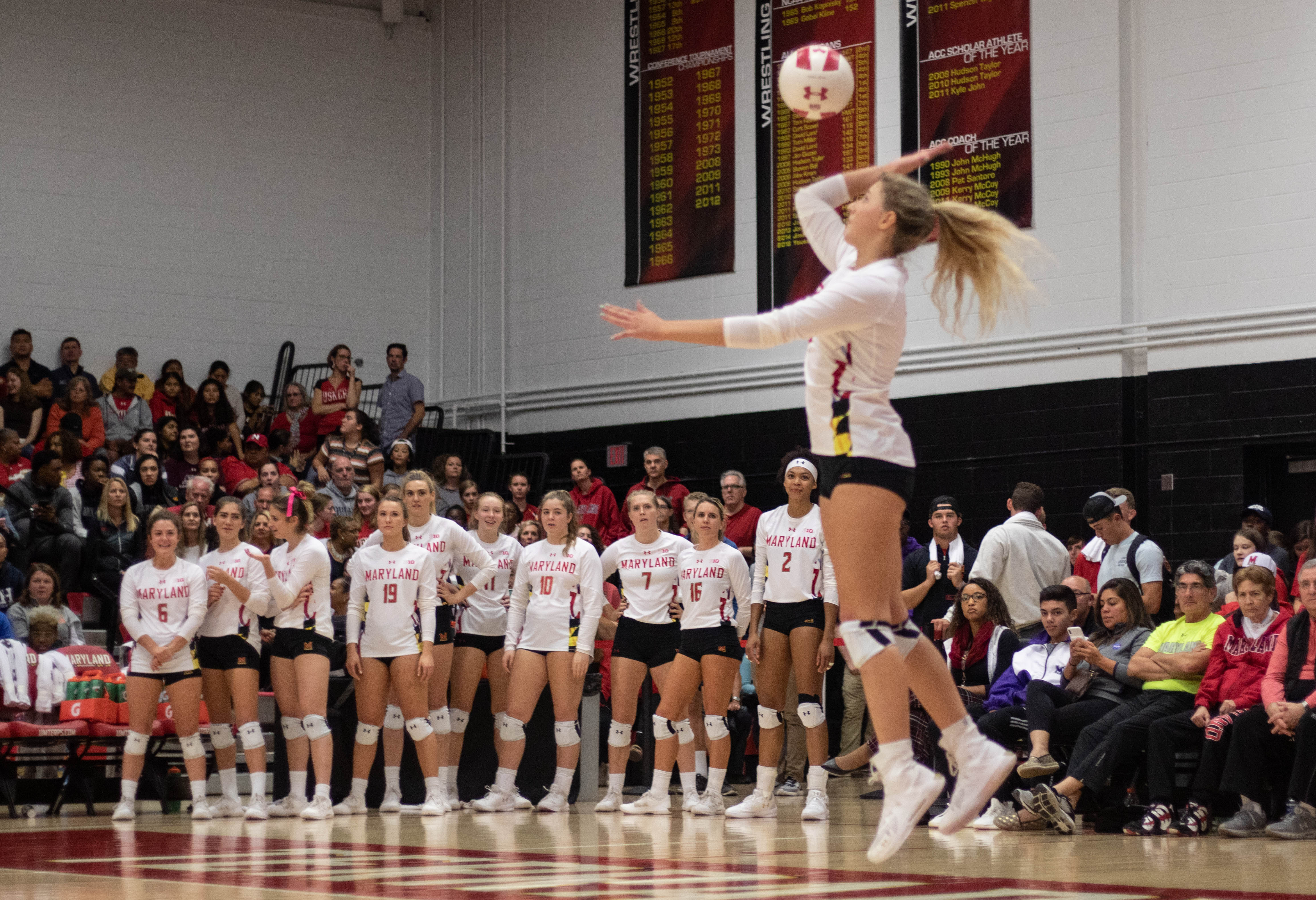 As her teammates watch from the sidelines, defensive specialist Samantha Burgio serves the ball in Maryland volleyball's 3-0 loss to No. 5 Nebraska on Oct. 19, 2019. (Julia Nikhinson/The Diamondback)

Burgio’s serve would set the tone for the rest of the night, as the Terps’ miscues from behind the endline dug themselves into frequent holes. The same problem that hurt Maryland during the nonconference season resurfaced, and it let nine serves go awry for Cornhuskers points.

While No. 5 Nebraska would go on to assert its dominance, the Terps’ self-inflicted wounds served as a foible in the straight-sets loss. And although coaches and players were excited to compete before the 2,225 fans, the imposing crowd couldn’t save Maryland from getting in its own way.

“I was really happy to have a crowd like that,” coach Adam Hughes said. “I thought we had an opportunity to make things interesting, and we were trying to get the crowd involved. We didn’t do a very good job from the endline out of the gate.”

Maryland totaled three service errors in set one, with the third coming from middle blocker Katie Myers out of a Nebraska timeout as the Terps trailed by just one. The miscue allowed the Cornhuskers to go on a roll into their first set victory.

After the first set, Maryland would add six more service errors to the stat sheet, cementing the day’s average at three per set — a mark the Terps haven’t reached since their five-set loss to Michigan State on Oct. 5.

It was apparent the service errors put a damper on Maryland’s flashes of momentum throughout the match.

[Read more: Throughout the ups and downs of the season, Maryland volleyball leans on training staff]

Hughes’ squad struggled to put away its serves, too. The Terps recorded just two aces, both coming when a win was largely out of reach.

Myers’ lone ace brought the scoreline to 24-19 in set one, staving off the inevitable as Nebraska won the frame on the next rally. The Cornhuskers finished with nine points off Maryland serves, while the Terps put down two points through service aces.

Though Maryland hurt itself at the service line, 44 digs from Nebraska’s imposing defensive unit didn’t help the team find its groove, either.

“Nebraska has been an exceptional serve-receive team, and they were exceptionally good tonight,” Hughes said. “There were a couple balls that we thought were down, but they found a way to come back to our side. That’s a tough style to play against.”

The Terps will also get another shot at the Cornhuskers on Nov. 29 in Lincoln, Nebraska. Similar to their two matchups against Michigan State earlier in the season, they’ll have a chance to amend a 3-0 loss in a different venue.

It begins with cleaning up the glaring errors that were at the heart of Saturday night’s sweep.

“On our side of the net, we need to focus on what we’re doing,” middle blocker Rainelle Jones said. “Then we can fix the issues we saw tonight.”