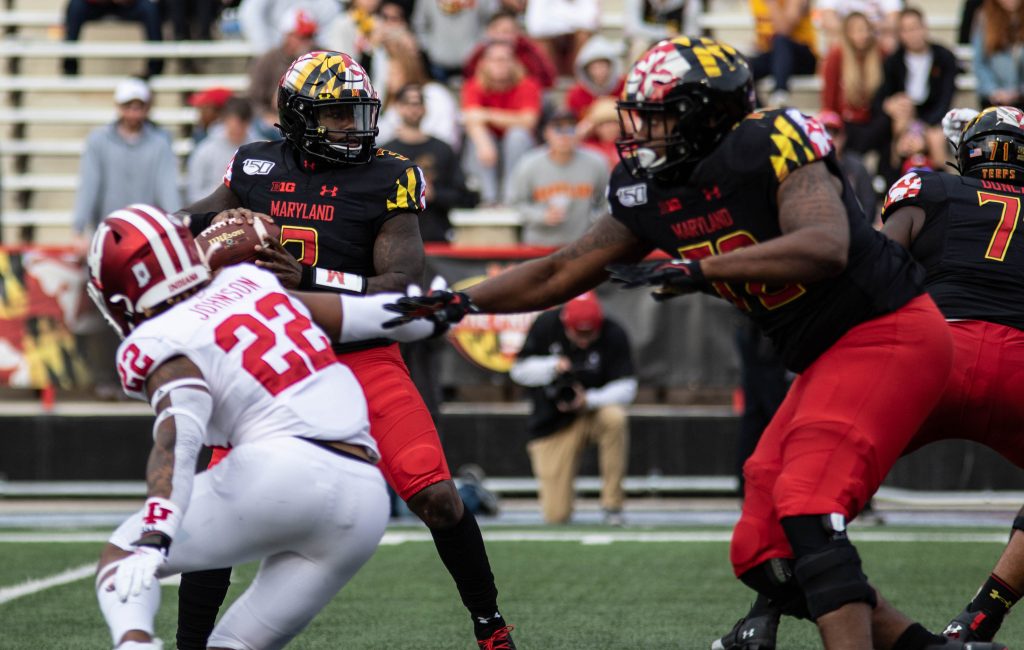 Maryland quarterback Tyrrell Pigrome steps up in the pocket in Maryland's 34-28 vs Indiana on Oct. 19, 2019 in College Park. Pigrome had 210 yards and two touchdowns on the day, but a late interception sealed Maryland's fate. (Julia Nikhinson/The Diamondback)

Indiana’s coaching staff hugged on the sideline, defensive back Reese Taylor skipped to the sideline with the ball in his arms and Tyrrell Pigrome was left with his hands on the side of his helmet, rueing the one throw that sailed on him.

The Maryland football quarterback’s interception was the second of two back-breaking late fourth quarter turnovers Saturday against the Hoosiers. Both of them — running back Javon Leake’s fumble and Pigrome’s misfire — proved fatal.

All that was left for Indiana quarterback Peyton Ramsey to do was kneel down, ticking down the remaining moments of a 34-28 win over the Terps, in which the Hoosiers steamrolled through Maryland’s defense en route to 520 yards.

“Good teams don’t beat themselves,” coach Mike Locksley said. “And we continue to do it.”

For all the good Leake did Saturday — the 80-yard touchdown run in the second quarter, or most of the other 23 carries that amounted into his career-best 158-yard day — it was a dump-off pass in the flat that will leave the ball carrier wanting.

On the Terps’ first play of a drive starting at their own 18-yard line with just under four minutes remaining, Leake gathered in Pigrome’s throw and faced the oncoming defenders.

“I see how he was carrying the ball, and I was like, ‘Gotta go for that ball,’” defensive back Juwan Burgess said. “It ended up paying out good for me.”

Burgess stripped Leake as the running back fell to the turf, setting up a field goal that made the offense’s job much harder on its second attempt at a game-winning drive.

Thinking back on the play postgame, Pigrome recalled the boundary safety moving wide and underneath coverage taking away some of the stop-routes. He settled for the seam with Savoy, and figured he had a soft spot in the coverage to throw a strike — and he did.

But Pigrome’s throw was too high, finding Taylor’s arms instead.

“Tried to make something happen,” Pigrome said. “Came up short.”

After falling behind 14-7 in the first quarter, Maryland’s deficit could have been larger if safety Antoine Brooks hadn’t pulled off a circus interception in the end zone. That takeaway — marking the 19th straight game the Terps’ defense has forced a turnover — led to Leake’s 60-yard breakaway score four plays later, good for a 14-point swing.

Without Anthony McFarland in the backfield — who missed out due to a high ankle sprain — Leake rumbled for a career-high 158 yards.

“That’s an explosive offense,” Hoosiers coach Tom Allen said. “I know they’re inconsistent, but I promise you this, they’re hard to deal with.”

On the following drive, Pigrome — filling in for Josh Jackson under center for the second straight week as the graduate transfer deals with a high ankle sprain — found wide receiver Dontay Demus down the sideline for a 40-yard pitch and catch.

During the week, Locksley shied away from calling Demus the Terps’ No. 1 wide receiver. He showed that capability Saturday, though, finishing with five catches for 82 yards, including a 15-yard touchdown catch to cap the seven-play, 75-yard drive.

That was far before Pigrome’s nadir, his final-attempt interception. It was one of the better moments of a 17-for-27 day for 210 yards and two touchdowns.

“I can’t fault Piggy for the competitor that he is,” Locksley said. “But obviously, quarterbacks have to be able to win games throwing the football when needed, and right now we’ve got to get him coached to the point to where he can go out and function and give us a chance in the throwing game.”

Without Penix — who left in the second quarter with an injury — the Hoosiers kept moving the ball with starter-turned-backup Ramsey.

The redshirt junior gunslinger led his squad on a eight-play, 63-yard drive before halftime, dropping in a dime to the corner of the end zone for a 26-yard touchdown to wide receiver Nick Westbrook, recapturing a lead entering halftime.

“You never want to allow an offense to steal a touchdown,” Locksley said. “And that’s what happened.”

In a loss to Purdue last week, in which quarterback Jack Plummer threw for 420 yards against Maryland’s defense, the pass rush was tame and the holes in the secondary were exposed. The Boilermakers hardly needed to hand it off — and neither did Indiana, managing 47 first-half rushing yards compared to 280 yards passing.

The Hoosiers finished with 173 yards on the ground — 108 from Stevie Scott — and they became the third team to eclipse 500 total yards against Maryland this year. Touchdowns in the third quarter from both teams set up the Terps’ three-point deficit and the opportunity for a fourth-quarter comeback.

Instead, a fumble from Leake and an interception from Pigrome doomed Maryland.

“There’s just a couple plays that we’ve got to execute next time to get the win,” Leake said. “I know my team played their hearts out.”

There are few must-win games midway through the regular season. But for the Terps, with Big Ten powerhouses looming on the schedule, Saturday felt as close to that as an October matchup can.

Locksley won’t say it — forever preaching a next-day mentality — but Maryland’s outlook gets tougher from here. There’s an undefeated Minnesota next week, and Michigan and Ohio State after that. Then, Nebraska and Michigan State round out the 2019 slate.