“This is the marquee game of the fall”: Maryland soccer set to renew rivalry with Indiana 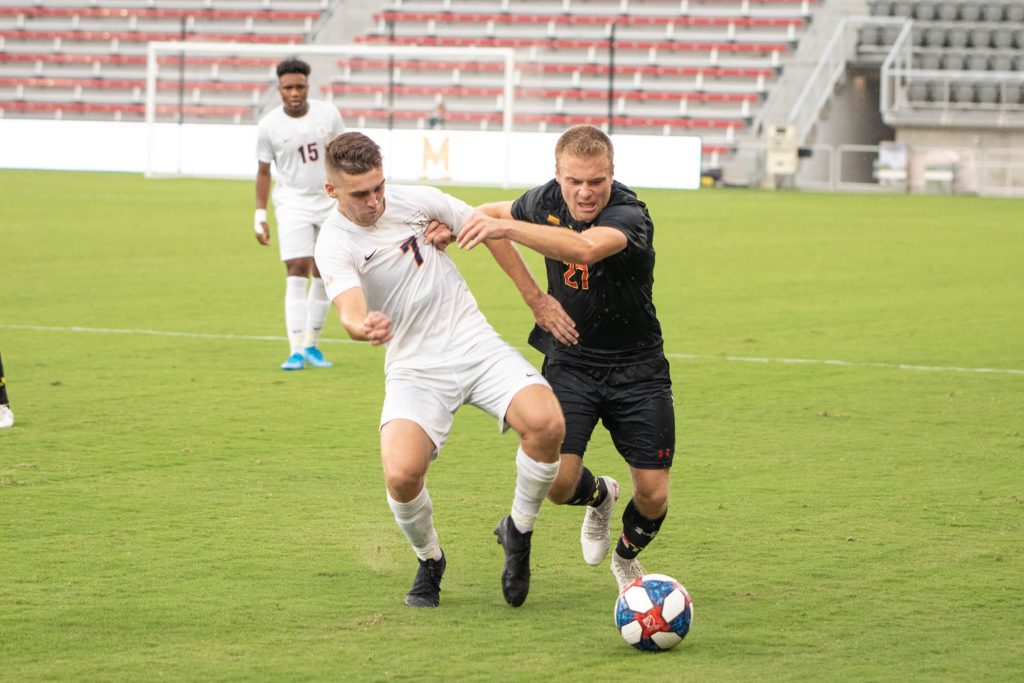 When Maryland joined the Big Ten in 2014, the men’s soccer team didn’t have any concerns about who its new conference rival would be.

The Terps had been playing a national schedule featuring a bevy of matchups with highly ranked teams and had appeared in 20 of 22 NCAA tournaments since coach Sasho Cirovski took the helm in 1993.

Those factors, Cirovski said, invite the formation of natural rivalries, such as one against Indiana. Before becoming conference foes, Cirovski’s Maryland teams had played the Hoosiers five times, with four matchups going to overtime, including Indiana ousting the Terps in double overtime of the 2004 NCAA semifinal.

Since 2014, the budding rivalry has blossomed into a highlight of the Big Ten slate each season. On Friday night, the two teams will meet again after Maryland eliminated Indiana from last season’s College Cup.

Friday’s matchup will be the 10th meeting since the two sides became conference foes. The nine prior matchups continued the pre-2014 trend of close games, as only last season’s College Cup game was decided by two goals or more.

Of those nine matchups, Cirovski’s squad has won three games and lost only once in regulation or overtime. Five games have ended in a draw, including two Big Ten tournament games requiring penalty kicks to decide a winner.

In 2014, the Terps claimed the Big Ten tournament title in their first-ever season in the conference after winning the shootout round at Ludwig Field. Last season, the Hoosiers knocked Maryland out of the conference tournament on penalty kicks in the semifinal.

“I think we play a very similar style,” Cirovski said when asked what makes these matchups so close. “We’re both a very tough team to break down, a lot of pride defensively, and we both like to attack.”

Last season, there were three fixtures between the two teams — one in the regular season, another in the Big Ten tournament and the last in the College Cup semifinal.

Those three matches featured a roller coaster of highs and lows for both teams. Indiana was the higher ranked team in all three matchups, but it needed a 90th-minute goal to emerge victorious in the first game and penalty kicks to claim the second.

And in the third matchup, the Hoosiers clashed with a Terps team that had peaked at the right time.

“We definitely were going through a bunch of rough patches last season when we faced Indiana in the regular season and in the Big Ten tournament,” midfielder Eli Crognale said. “We caught our stride at the right time, and then when we caught them in the semifinals, we were virtually unbeatable.”

In that match, Crognale doled out two assists to help Maryland get over the hump and conquer Indiana with a 2-0 win.

One of those assists went to defender Matt Di Rosa on the game’s opening score. Di Rosa called the goal “a great moment” in his career, but said that he and the No. 25 Terps have moved on from last year and are prepared for a motivated No. 6 Indiana team at Ludwig Field.

“They’re definitely going to come out strong,” Di Rosa said. “We always have a target on our back, especially after winning a national championship. So we’re expecting their best effort and we just have to be up for the challenge.”

For Cirovski, he feels like he’s been chasing the Hoosiers his entire career, going back to his days playing against Indiana at the University of Wisconsin-Milwaukee from 1981-1984.

During Cirovski’s time in college, the Panthers faced off against the Hoosiers four times, but were outscored a combined 11-0. During that time, the Hoosiers appeared in three consecutive College Cup finals, winning the first two and losing the third.

Now that Cirovski has brought Maryland to a similar level of prominence and esteem, he credits Indiana with helping to strengthen his program.

“We’ve established our own identity,” Cirovski said. “But at the same time, [we’ve] been sharpened by their success.”