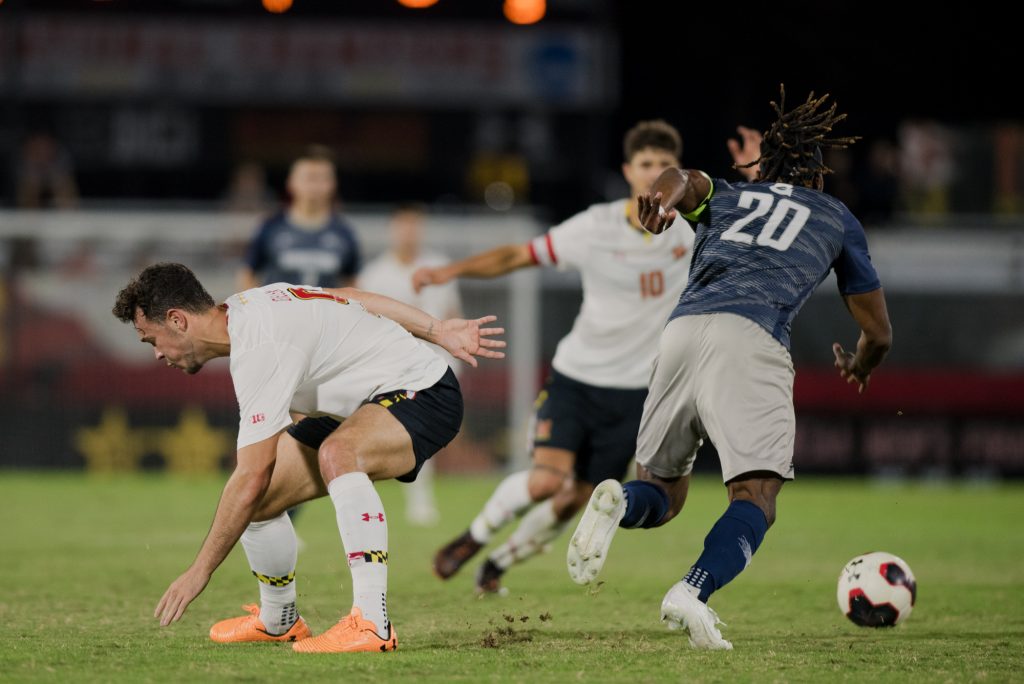 Georgetown forward Achara breaks up field with the ball during the Hoyas' 1-0 win over Maryland men's soccer on Oct. 14, 2019. (Gabby Baniqued/The Diamondback)

Maryland men’s soccer forward Luke Brown jockeyed for position along the endline and centered a pass toward goal. After a deflection, Georgetown defender Foster McCune cleared the ball out to the edge of the Terps’ attacking third.

And with that, the counterattack was on.

Forward Derek Dodson won the loose ball and laid off a pass to midfielder Zach Riviere, who avoided two defenders while sprinting half the length of the pitch. Riviere passed ahead to midfielder Paul Rothrock, who sent the ball into the box to Achara, whose flick pass to Dodson set up the game’s lone goal in the Hoyas’ 1-0 win Monday night.

During the second half, then-No. 12 Georgetown found gaps in No. 25 Maryland’s defense in transition opportunities and exploited these openings to overwhelm the Terps in the last 45 minutes of an otherwise tight contest.

“As the game progressed, Georgetown’s depth and quality started to take over the game. You could see that we got a little more spread [out],” coach Sasho Cirovski said. “Our inability to hold the ball in attacking positions, and to [have], in some cases unforced turnovers, started to really wear us down.”

Cirovski’s defense has struggled at times in transition this year, namely in the early season loss to UCLA, when Bruins forward Milan Iloski ran rampant and scored three goals.

Early on Monday night, the middle of the field was congested for both teams. The two sides struggled to generate many meaningful chances and managed one first-half shot on goal each.

But in the second half, the Hoyas ramped up their counterattacking pressure and found increased opportunities, ultimately peppering six shots on goal in the final 45 minutes.

“I think we just struggled to hold the ball. We kinda went a little away from what we did in the first half,” midfielder Nick Richardson said. “They were pressuring us very hard, we weren’t really getting many options off many people. … We didn’t have an answer for the last 45.”

Maryland tried to find the right formula to solve the visitor’s defense. But seemingly every time the Terps tried to play the ball up the field, or cross a chance into the box, Georgetown made the requisite plays and quickly initiated its counterattack.

Both Maryland and the Hoyas came into the match on just two days’ rest after playing last Friday. But the Terps needed to travel home on one of those rest days following a 1-1 draw at Michigan State.

Adding to Georgetown’s advantage was the depth of its team compared to Cirovski’s injury-riddled squad. The Hoyas continuously shuffled in forwards and midfielders to keep the players fresh in comparison to a fatigued Maryland team.

“I think you could see Georgetown’s depth played a vital role,” Cirovski said. “They just looked fresher in the last 20-25 minutes of the game.”

The post-halftime effort didn’t resemble what the Terps can generally produce at home this season, outscoring opponents 7-3 in the second half at Ludwig Field prior to Monday’s loss.

And against a top-ranked team, the struggles controlling possession and remaining organized while getting back on defense were even more apparent.

“Our spacing defensively was not right. Our inability to hold the ball was not right,” Cirovski said. “And against Georgetown, you’ve got to play more like the way we played in the first half, and actually even a little bit better, if you want a chance to win. And for us, it was the complete opposite.”