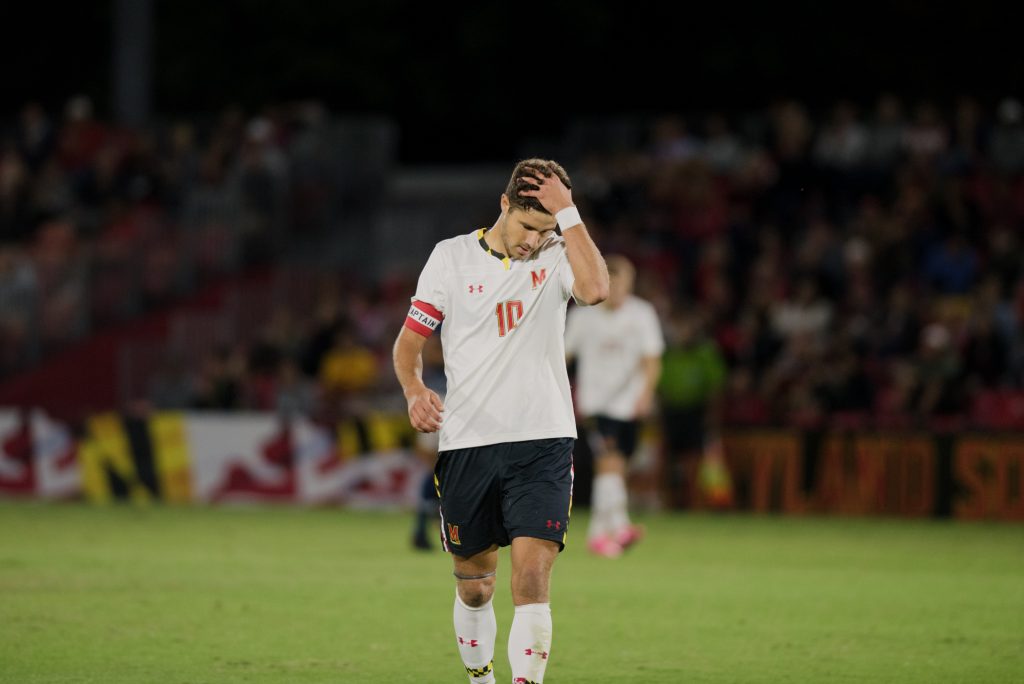 In the 65th minute of Maryland men’s soccer’s local rivalry bout with Georgetown, the Hoyas pounced on a loose ball resulting from a clearance and promptly initiated a counter attack.

And within 13 seconds, Georgetown connected on four passes and traversed three-quarters of the field for a transition goal off the foot of forward Derek Dodson.

The No. 12 Hoyas created a number of chances in the second half, including two prime looks that were cleared off the line, before Dodson’s breakthrough propelled the visitors to a 1-0 win over the No. 25 Terps at Ludwig Field on Monday night.

“Credit to Georgetown, they came out [and] played very hard. They played a full 90 [minutes],” midfielder Nick Richardson said. “I thought we played a very good 45 [minutes] and then kinda just fell off in the second half.”

Both teams entered the game coming off a Friday match, with both struggling to find their respective attacking rhythms in the first half. Neither side created many threatening chances during the first-half gridlock.

Maryland’s lone shot on goal came in the sixth minute when midfielder Eli Crognale’s attempt forced goalkeeper Tomas Romero to make a leaping stop to deflect the ball over the crossbar and out of play.

Following that chance, though, the Hoyas controlled possession and wound up outshooting the Terps 5-2 in the opening half. Coach Sasho Cirovski’s backline was up to the task to block two of those shots before they could reach goalkeeper Niklas Neumann. The freshman needed to stave off just one shot on goal in the first 45 minutes.

“We competed hard, we competed well. We just didn’t half enough left in the tank in the second half,” Cirovski said. “Their quality, maybe their freshness, took over a little bit.”

That discrepancy in freshness Cirovski alluded to was apparent from the outset of the second half. The pace of play opened up significantly, and there were opportunities abound for the visitors.

In the 48th minute, Hoyas forward Jack Beer was on the receiving end of a cross into the box and ripped a shot, which required a sliding block from defender Brett St. Martin to spoil the opportunity.

The Terps’ best chance of the night game came four minutes later when forward Eric Matzelevich laid off a pass to forward Justin Harris inside the 18-yard area. Harris had time and space in the box, but missed his shot wide-right to waste the look.

Maryland needed a couple of spectacular individual efforts at the goal line to survive Georgetown’s next two chances. First, Neumann leapt to get a piece of forward Achara’s strong shot and keep it out of the net.

Then, five minutes later, a shot went through Neumann’s legs and was on its way for a goal, but defender Matt Di Rosa stuck his heel out on the line to barely thwart a Hoyas breakthrough.

“In a game when you have a defender take one off the line and you have a goalkeeper make two or three big saves like that, you should have a chance to win,” Cirovski said.

But the Terps’ weren’t able to escape the next threat. Georgetown’s transition was cohesive and decisive, and Dodson capped off the opportunity for the game-winning goal.

After claiming the lead, the Hoyas continued to put the defense under siege, reeling off six shots in the late stages of the game. Three of those looks required Neumann to make a save, while another deflected off the crossbar to keep Maryland’s fleeting hopes alive.

Georgetown’s defense continued to hold strong, though, allowing just two shots in the 25 minutes following the score to hand the Terps their first loss since they fell to Northwestern on Sept. 20.

Maryland will have three full days to recover before welcoming No. 4 Indiana in a Big Ten clash.