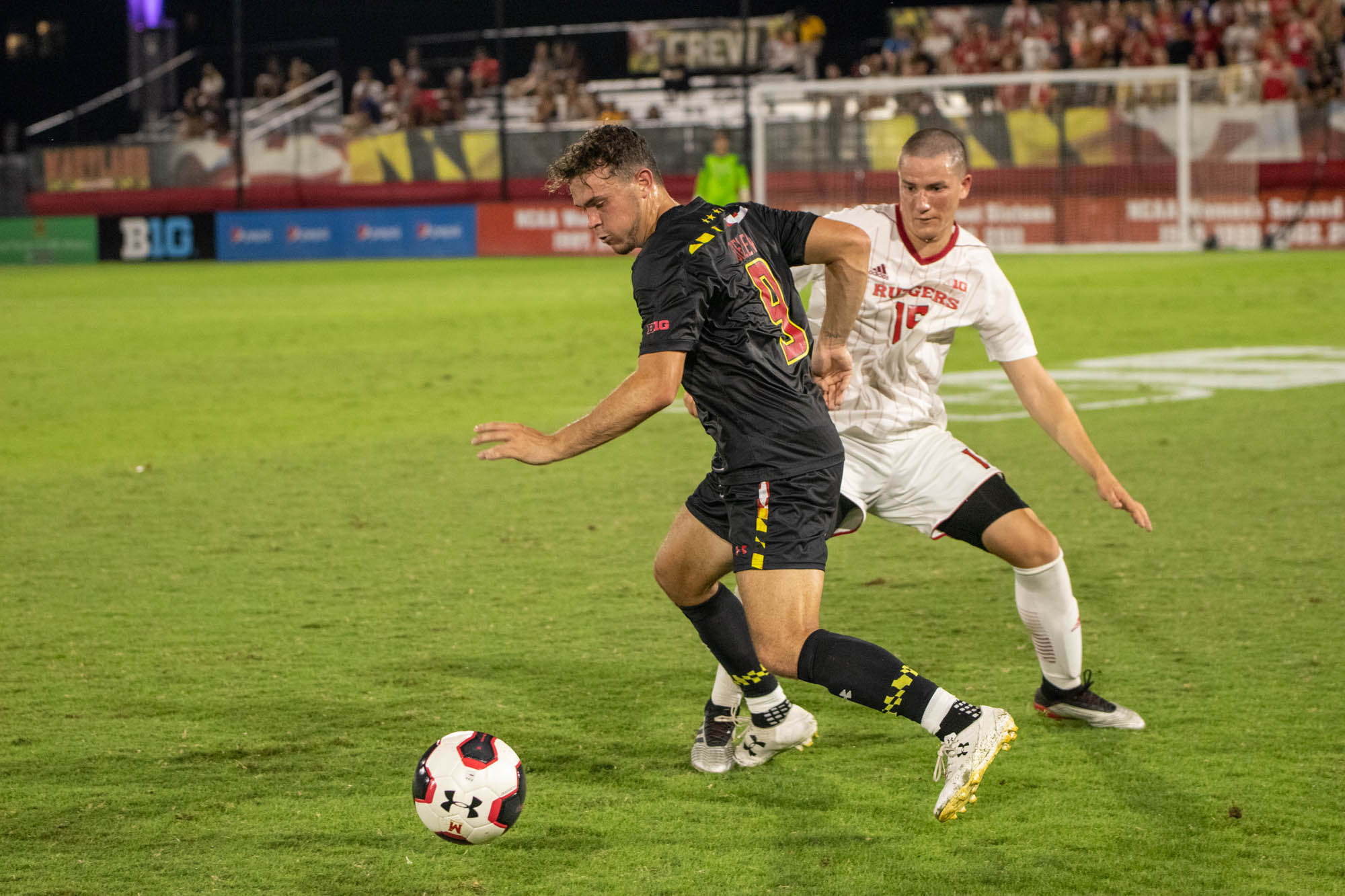 On a dreary Friday night, No. 25 Maryland men’s soccer found itself in a battle with both the weather and Big Ten foe Michigan State.

The two squads last faced each other in East Lansing in the 2018 Big Ten tournament, where the No. 5 seed Terps knocked off the No. 4 seed Spartans.

In their return, Maryland used a 78th minute goal from forward Justin Gielen to steal a draw from the jaws of defeat.

With the teams and officials deciding against an overtime period due to adverse weather conditions, the Terps were left to wonder what could’ve been in those missing minutes against a Michigan State squad they outshot 16-7 in regulation.

Given the poor field conditions, it would’ve made sense to see the Terps’ attack sputter. It may have been ugly at times, but Maryland continued to press forward and create chances against Spartans goalkeeper Hunter Morse.

At several points throughout the game, Morse appeared to be beaten, only for the ball to sail off target or for a Michigan State defender to clear it away just in the nick of time.

In total, Cirovski’s squad was able to put nine shots on goal — with two ringing off the crossbar — compared to the Spartans’ four.

Among the multitude of missed chances, forward Eli Crognale’s well-placed corner kick into the box proved to be one of the most agonizing. The ball found defender Brett St. Martin’s head, with Morse off his line and dead to rights in the crowded area.

Just as quickly as St. Martin got a head on it, though, Spartans defender Nick Stone used a header of his own to keep the ball from the back of the net, preserving his team’s 1-0 lead 13 minutes into the second half.

The Terps finally broke through thanks to Gielen’s first goal of the season — a result of Maryland’s sustained pressure on Michigan State’s backline.

Justin Gielen played his best game of the season

The Terps offense buzzed around Morse for the majority of the game with forward Eric Matzelevich and midfielder Malcolm Johnston both registering three shots in the game.

[Read more: No matter who’s taking them, Maryland men’s soccer has capitalized on its set pieces]

Crognale and St. Martin added two apiece. But all of their efforts paled in comparison to Gielen’s four shots and equalizer.

Before the rain pounded down on everyone, Gielen found himself in a few advantageous situations. His first header sailed just high over the bar while the second required Morse to make a difficult save while diving to his left.

The third hit paydirt, as Gielen finally cracked Morse’s code, tying the game at one.

Niklas Neumann stepped up when his team needed it

Michigan State didn’t have many chances in Friday’s bout — both due to weather and a Maryland offense that dominated possession. But the Spartans found enough holes to make the Terps goalkeeper work.

After a plethora of unsuccessful chances for the Terps, Michigan State launched a counterattack that saw forward Farai Mutatu break free and fire a shot at the Maryland goal in the 27th minute.

But Neumann stood tall and confidently knocked the ball away, thwarting the would-be goal.

With the game mostly played in the Spartans end of the field, Neumann could only stand and watch as the weather continued to wreak havoc.

At times, the German-born netminder seemed to be the only player not fazed by the adverse conditions, never losing his footing or misplaying a ball.

In a game where any crazy bounce or error was much more likely due to puddling, Neumann wasn’t rattled.