No matter who’s taking them, Maryland men’s soccer has capitalized on its set pieces 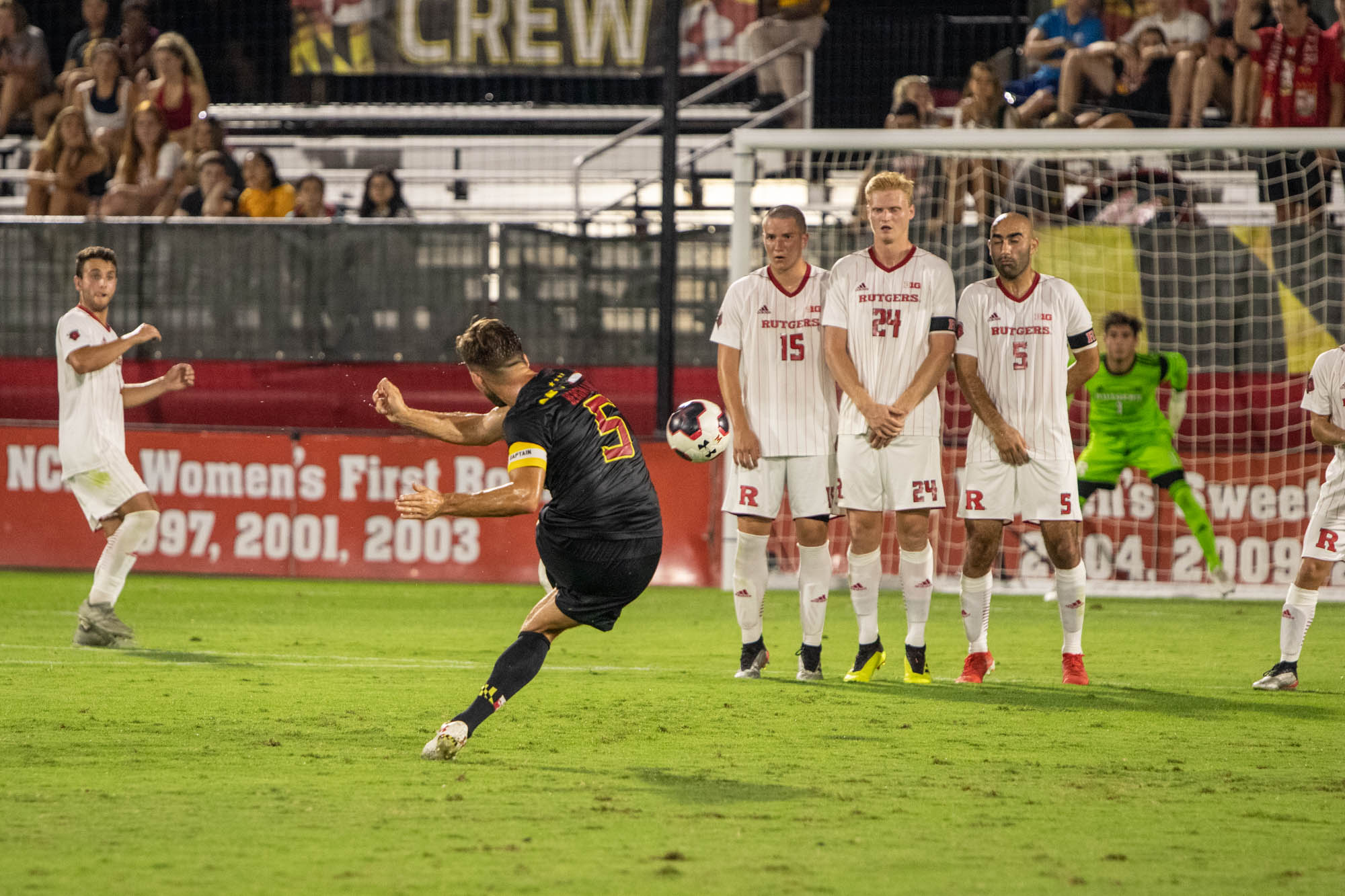 In the 78th minute of a 1-1 game, with Maryland men’s soccer in search of a go-ahead goal and its first Big Ten win, a Rutgers defender knocked the ball out of play along the sideline in the Terps’ attacking half.

Defender Chris Rindov hoisted a long throw-in from the sideline to the box, where fellow defender Brett St. Martin sent it farther along to forward Fola Adetola in the heart of the 18-yard area. Adetola turned and laid off a pass for midfielder David Kovacic to take a powerful shot that propelled Maryland to a lead — and an eventual 3-1 victory.

This season, coach Sasho Cirovski’s squad has taken advantage of these plays, netting four of its 12 goals off well-executed set-piece plays like Kovacic’s first goal against Rutgers. And three of those set-piece scores have been game-winning goals, accounting for half of the Terps’ wins.

“Typically in soccer, a third of your goals, or right around 30 [to] 40 percent, should come off set pieces,” Cirovski said. “Whenever we get good services, we have a chance.”

In the season opener against USF, Crognale saw a number of his services sail awry, without giving his teammates an opportunity to make a play.

But in the 70th minute, Crognale finally whipped in a corner kick service that offered a glimmer of a promising end result. His service floated into the box, where unmarked midfielder Malcolm Johnston moved into position to head in the game-winning goal.

“I was really struggling in that first half. I don’t know why,” Crognale said Aug. 29 after the win. “I had to get my feet under me. And in the second half, I played in that good ball.”

In the third game of the season, another option emerged as a viable candidate to take corners and free kicks. Sophomore forward Brayan Padilla flashed a potent and accurate left foot on a 72nd-minute free-kick goal that left UCLA goalkeeper Justin Garces diving to no avail.

Padilla saw an increased number of service opportunities as the season progressed. But it all came crashing down during pregame warmups ahead of the Rutgers game, when the sophomore suffered a torn ACL in his left knee, leaving the Terps without one of their most dangerous options on those corners and free kicks.

“Not having Brayan hurts,” Cirovski said. “He was delivering some appetizing services.”

Maryland’s final set-piece goal by this point in the season has been a penalty kick off the foot of Crognale that put the team up 1-0 en route to a 2-0 win over then-No. 14 Cal State Fullerton.

Forward Eric Matzelevich attributes the success on set pieces to a shared mindset of capitalizing on the quality services.

“We’re constantly talking about mentally what we do on set pieces,” Matzelevich said. “They can whip in such a good ball, so it’s just having that collective mentality of beating your first guy and hopefully getting it in the goal.”

On the other end of the field, Maryland’s defense hasn’t conceded a set-piece score all season, with many of the goals allowed coming on transition opportunities.

“We definitely put in the time to know set-piece tactics we go over before every game. Our assistant coaches are always on telling us where everybody needs to go,” St. Martin said. “In the game, we always have different adjustments … We do a good job of situating all that out.”

Beginning with its next match, on the road against Michigan State (2-6-2), Cirovski’s team will look to continue its advantage on the set-piece opportunities on both sides of the field.

But even if those plays appear to be foiled initially, the Terps have shown the propensity to play scrappy to keep their chances alive. On three occasions this season, a free kick or corner threat appeared to be diffused, but Maryland still persisted to come away with a score.

“Effort goals are as good as the SportsCenter Top 10 goals,” Cirovski said. “They all count the same.”