Brett St. Martin had big shoes to fill, but he’s doing the job for Maryland soccer 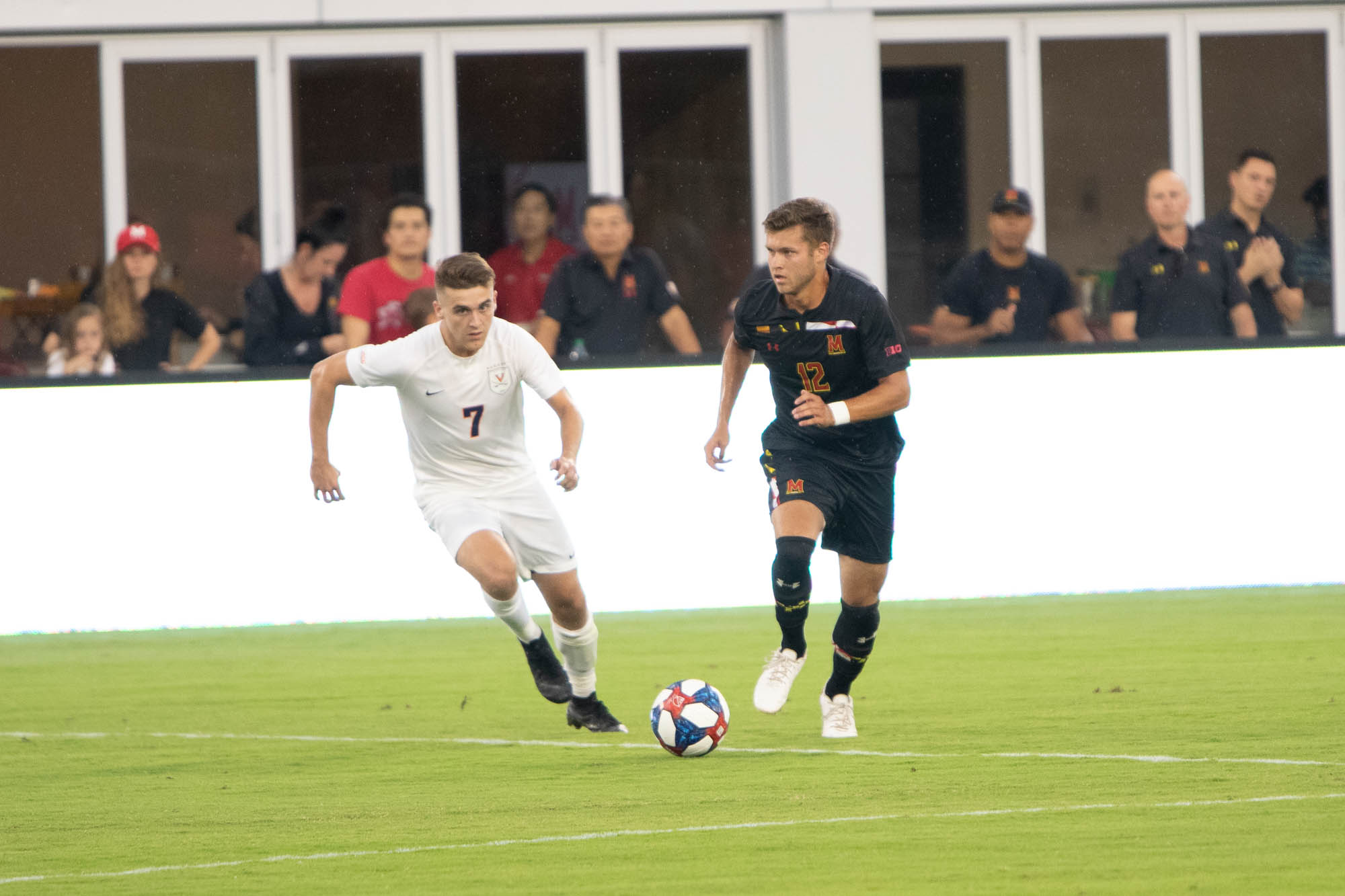 “You don’t replace Donovan,” Cirovski said with a laugh Tuesday.

Though Cirovski wouldn’t concede that St. Martin has duplicated Pines’ success, the 27th-year coach said the sophomore defender has fulfilled his role well within the defense, which has posted a Big Ten-leading six shutouts.

“Brett’s been fantastic all season long,” Cirovski said. “He’s very good in the air, he’s got some speed. He’s a little different from Donovan, but he’s been terrific.”

Trying to fill Pines’ vacant center back position after he signed as a homegrown player with MLS’s D.C. United wasn’t a seamless task for the Terps.

Pines was a rangy defender who possessed a rare combination of athleticism and size at 6-foot-5-inches, which helped him eliminate threats both on the ground and in the air. His imposing defensive presence afforded Maryland the opportunity to take risks stylistically.

“Donovan is just so energetic and had so much great recovery speed, and we could play a little bit more aggressive,” Cirovski said. “Maybe [play] with a higher line, and Donovan could pretty much put out any fire.”

And though that aggressive style isn’t as prominent this season, St. Martin has adopted the role of thwarting potential scoring chances on the defensive end.

Playing in 12 games, including seven starts, St. Martin gained valuable experience last season as a depth piece at right back and center back. Whether he was playing alongside Pines as a right back or watching from the sideline, St. Martin took full advantage of the firsthand knowledge from the 2018 All-Big Ten First Team performer.

“Basically just play quick, play simple,” St. Martin recalled of his takeaways from Pines. “As a center back, you’re not the person to create too many things. Most of the time it’s simple passes, go forward as much as you can and always [be] on defensively.”

Junior forward Eric Matzelevich noticed St. Martin’s work in the spring and summer sessions to improve his defensive ability and physicality ahead of his anticipated starting role this season.

“His heading has improved. Over the summer, he put in a lot of hard work and got a lot bigger physically,” Matzelevich said. “Doesn’t have [Pines’] height, but definitely, he’s the same [in] wanting to get the ball.”

Last season, Pines worked with defender Johannes Bergmann in the center of the typical four-man backline that the Terps employed in their staunch defense.

Ahead of the 2019 season, Bergmann acknowledged it would take time for him and his new center back partner to fully develop the same chemistry. Now ten games into the season, their partnership is flourishing.

“It’s definitely improved. I think you can see it on the field. We definitely know where each other are going now without even telling each other,” St. Martin said. “It’s just learning our playing styles and learning how we connect together.”

St. Martin has captured Cirovski’s attention with his ability to make good decisions and passes out of his defensive position.

St. Martin attributed that trait to his time with his club team, Baltimore Celtic, which he said plays a similar style to Cirovski’s style of possessing the ball and advancing up the field with quick, decisive passes.

The sophomore also showed his ability to carve out positioning in the box on the attacking end. Late in double overtime against St. John’s, Maryland scrapped to keep a corner kick alive, and St. Martin flicked in the game-winning goal that ignited the Terps’ four-match unbeaten streak.

As Maryland looks to continue that momentum and chase more clean sheets, St. Martin will try to continue filling in admirably for the 2018 second-team All-American defender.

“I think there’s always pressure there when you have a guy like Donovan,” St. Martin said. “It was definitely a learning experience playing under him, because he was just such a great player, but [I was] definitely learning the role to start now.”