Amid downpour, No. 25 Maryland men’s soccer draws 1-1 with Michigan State 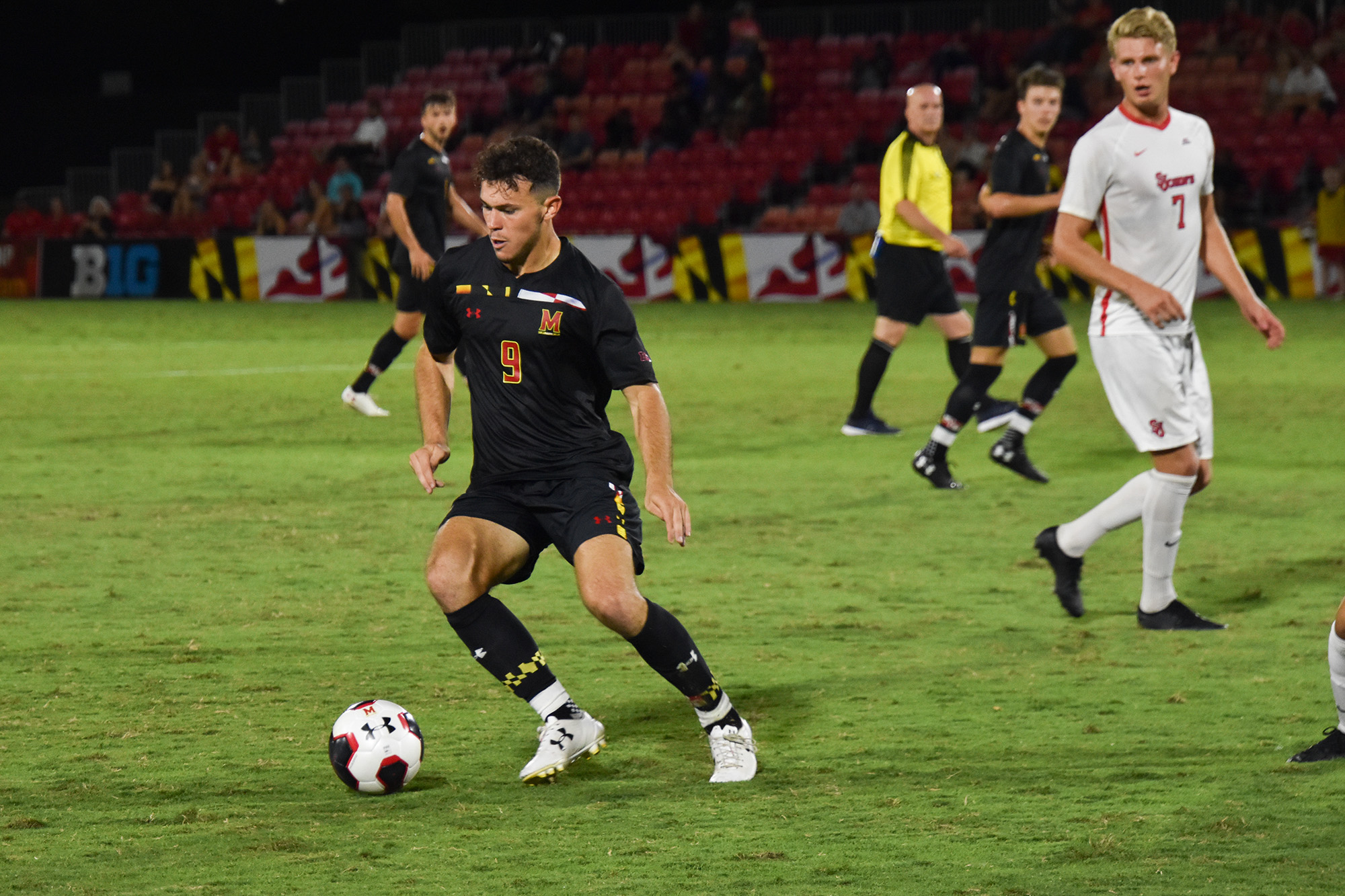 When defender Johannes Bergmann lined up for a free kick in the 77th minute, the Maryland men’s soccer team and Michigan State jockeyed for position inside the waterlogged Spartans box.

The immense rainfall had stymied the Terps all night. But forward Justin Gielen was able to leap and head the ball past Michigan State goalkeeper Hunter Morse, yelling out in joy upward at the dark clouds.

Before the rain became a deluge, Maryland had the first big chances of the game.

In the 15th minute, winger Malcolm Johnston instigated the game’s first scoring opportunity with a run toward goal culminating into a flick for forward Eric Matzelevich. But a sliding Michigan State defender foiled the chance, clearing the ball.

The Terps continued to operate around the Spartans’ net, but were continually turned away by Morse. Gielen connected flush on two headers in the first half. The first sailed over the net, while the second required Morse to make a diving stop.

[Read more: No matter who’s taking them, Maryland men’s soccer has capitalized on its set pieces]

Maryland goalie Niklas Neumann made his presence known between the sticks as well. When Michigan State forward Farai Mutatu fired a quick shot, Neumann fended it off with a diving stop of his own.

Before too long, the weather made its own presence felt.

It had rained in East Lansing most of the day Friday, but only drizzles remained when the game started. The drizzles would soon turn into torrential downpours.

The final 10 minutes of the first half were played in a near-monsoon, with both teams struggling to keep their footing and the scoring chances diminishing as a result.

When the game seemed destined to head to the half scoreless, Michael Pimlott stepped up for the Spartans.

A mere 24 seconds after midfielder Eli Crognale had a ball saved on a free kick, Michigan State sprinted down the soaked field in a counterattack. One pass by the Spartans forward Gianni Ferri was all Pimlott needed to get behind the defense and plant one behind Neumann.

The Terps entered halftime drenched and deflated. But the defending national champions wouldn’t go down without a fight.

The 51st minute saw Matzelevich take a Ben Di Rosa cross and put it on goal in what looked like a sure score. The mass of bodies and puddles surrounding the net didn’t faze Morse, as he once again shut the door on a quality chance at a breakthrough.

Maryland continued to push forward, putting pressure on Michigan State, culminating in defender Brett St. Martin putting a header behind Morse. However, the Terp was denied by Spartans defender Nick Stone’s heads-up play that cleared the ball away.

As time waned, players began slipping and falling down, as the field began to bear the effects of the weather — and Morse seemed to be weathering both the figurative and literal storm.

In the 77th minute, the Maryland onslaught finally paid off, as Bergmann laid a perfect ball into the Michigan State box. Gielen missed his chances early, but he cashed in when his team needed it, catapulting Bergmann’s cross with a perfect header that tied the match at one.

The two teams continued to battle with the weather beating down on them but when the regulation whistle blew, it was decided that the poor field conditions were not worth an overtime period.