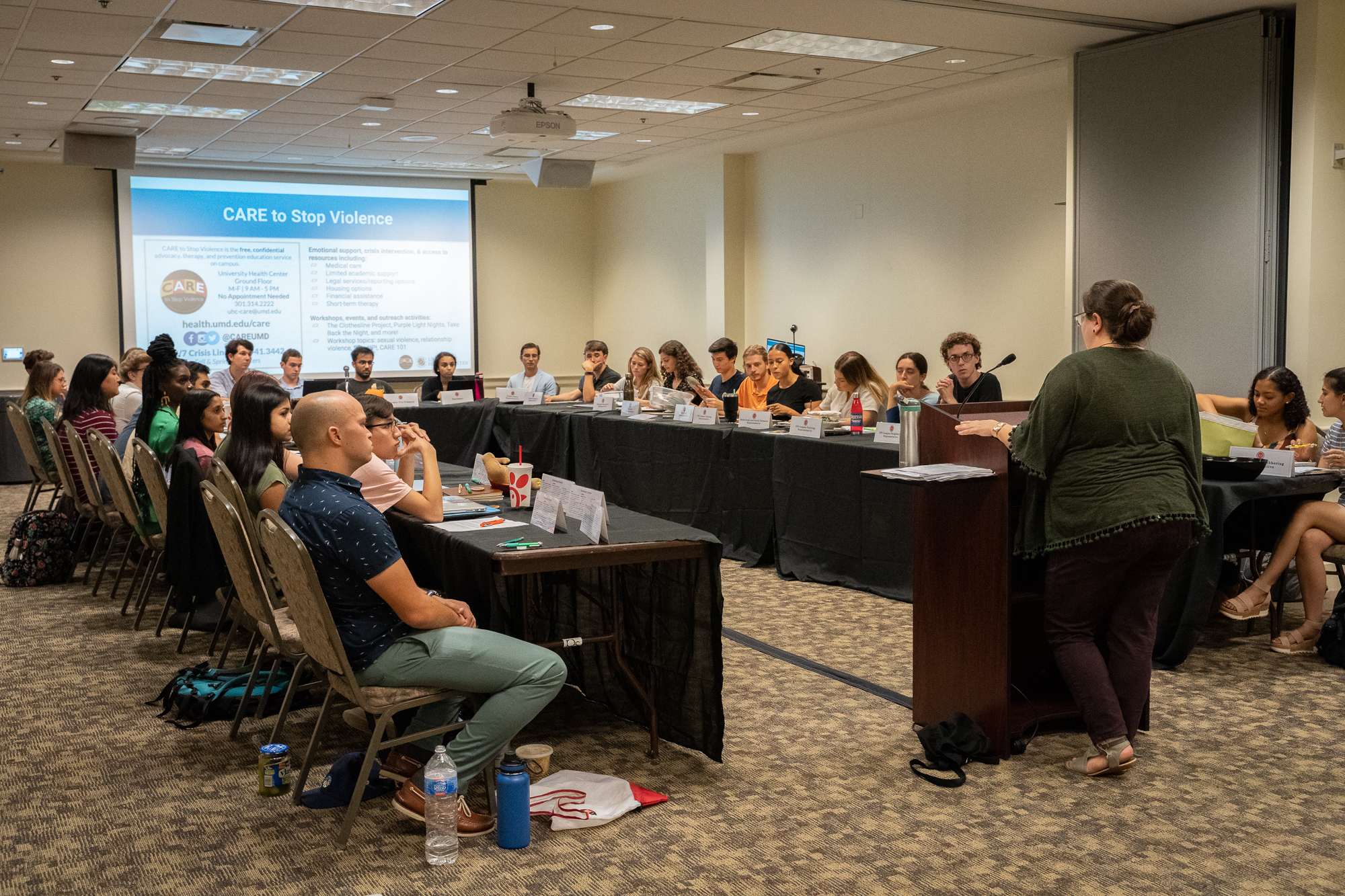 Carly Cottone, the Outreach Liaison for CARE to Stop Violence, delivers a presentation on sexual assault to those in attendance at the SGA meeting on Oct. 2, 2019. (I'Shea Boyd / The Diamondback)

The SGA completed its first sexual misconduct prevention training earlier this month, in an effort to become better educated on the issue and set an example for others at the University of Maryland.

Student Government Association president Ireland Lesley proposed the change last year because she wanted to promote a safer campus community. But, she felt that, to accomplish that, the SGA had to change its own community first.

“In my time here at UMD I have seen a lot of my friends be impacted by [sexual assault] and have heard really horrific stories,” Lesley said. “So I think for me, it was important for the communities I’m in to be aware of those things because those are the things I’m aware of.”

The annual mandatory training was added to the SGA’s bylaws last year, Lesley said. Elena LeVan, the SGA’s Sexual Misconduct Prevention director, advocated for it because she felt SGA members needed to be aware of what role they can play in preventing sexual assault and violence as student leaders.

“It’s so important because student leaders have such an impact on the culture of the campus,” LeVan said. “I want to make sure that people on my committee … know how to respond.”

There are 30,511 undergraduate students currently enrolled at this university, according to a report released by the Office of Institutional Research, Planning and Assessment. If the statistics were applied to current student demographics, approximately 4,885 out of the 14,654 female undergraduates and 2,643 out of the 15,857 male undergraduates on campus would be victims of sexual violence.

“If these statistics hold true then there are a lot of people on this campus who this is impacting. … We really need to do something about this. Not just UMD, but we and every college and every industry,” Cottone said.

While the statistics are powerful, Lesley said they can be difficult to conceptualize. For her, Cottone’s presentation did that.

“When you’re in a group setting like that, you can really visualize it,” Lesley said. “It’s super important for those statistics to be portrayed in a way that’s very real, right? I don’t think they should be sugarcoated at all.”

The SGA recently kicked off the Reclaim the Red campaign, which spreads awareness to students about preventing sexual assault through social media posts, tabling around the campus and working with other campus organizations.

The “Red Zone” is a period of time between the beginning of the semester and Thanksgiving break in which most sexual assaults committed on college campuses occur. According to experts, first-year students are the most vulnerable because they have not yet assimilated into college life and new environments where they may be exposed to drugs, alcohol or peer pressure.

Toward the end of the training, several SGA legislators asked questions about the most appropriate ways to handle disclosure of sexual assault, as well as what to do in different situations, especially when alcohol or other substances are involved.

One legislator, sophomore information science major Richa Dhamankar, spoke on her initial reactions and how she suspects few realize the extent to which sexual assault and misconduct affect the campus community.

“I think a lot of people have had that experience, but don’t necessarily know that it’s labeled as sexual assault or sexual violence or any of this,” said Dhamankar. “It’s such a big umbrella term and you don’t realize that it happens … more often than not.”

While the training has encouraged conversations within the SGA, Dhamankar looks forward to taking further action across this campus to prevent sexual assault.

“SGA’s focus on it this year is really to bring it to light first. And [we’ll] move on from there with more tangible change.”

Still, Cottone recognizes much more work needs to be done.

“The main thing I hope people got out of it was that this presentation or this workshop is definitely a step on the way,” Cottone said. “And that I encourage them to continue taking those steps.”