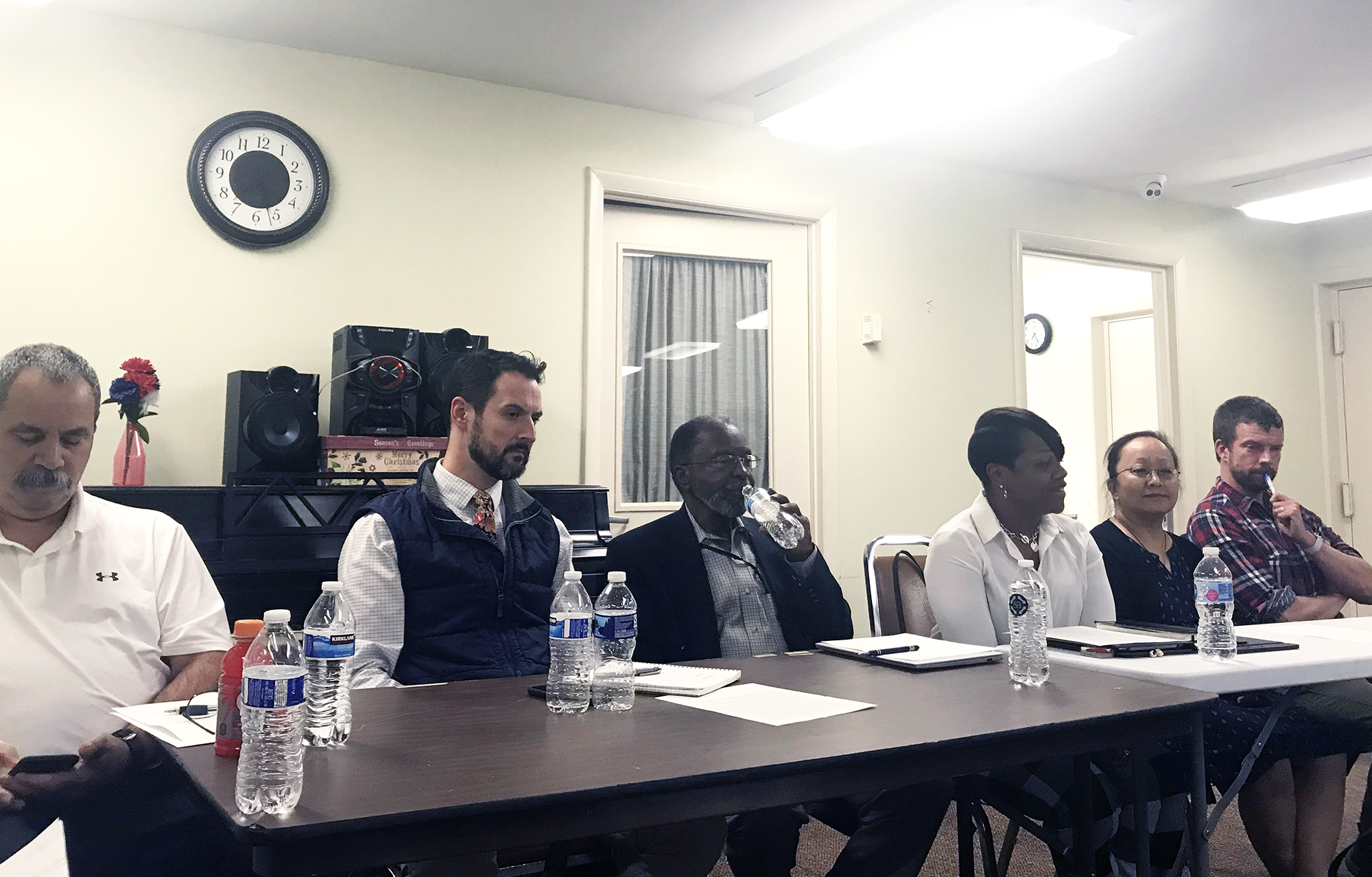 Arelis Pérez said she remembers the Attick Towers apartments in their earlier days, when the complex was clean and had manicured gardens. But now, she said, the 47-year-old building needs an overhaul.

“It takes a village,” she said. “It is going to take the entire city of College Park to come together to bring Attick Tower[s] back to its beauty.”

The apartment complex, which operates under College Park’s public housing authority and is located near University Boulevard on Rhode Island Avenue, is home to the city’s senior citizens program. On Monday night, candidates for November’s City Council elections spoke with its residents about issues facing the city and the building.

The forum, held in the building’s community room, was packed with about 30 attendees. Pérez, a board commissioner on the city’s Housing Authority, moderated the forum. She directed questions about Attick Towers, the city and senior citizens to the candidates in attendance: Mayor Patrick Wojahn, District 2 council members P.J. Brennan and Monroe Dennis, along with District 2 hopeful Oscar Gregory and mayoral candidates Lalzarliani Malsawma and Nikesha Pancho.

In a public comment session toward the end of the night, residents complained that their building was riddled with mold, roaches and unkempt trash rooms, and said the complex’s management had been unresponsive to their concerns. Housing authority minutes from January reference a “bed bug infestation” and a “lead paint issue” in the building.

When reached by The Diamondback, James Simpson, the housing authority’s executive director, declined to comment.

The forum was an effort to encourage voter participation in the Nov. 5 election, said Betsy Lynn, Resident Council vice president at Attick Towers — and a reminder to residents that the city government can help them if the building’s management won’t.

“There is a place to go other than that office,” she said, gesturing toward the apartment’s lobby.

In 2017, the building received a score of 72 out of 100 on an inspection the federal Housing and Urban Development department performed. That’s a passing mark — though it’s 1.3 points lower than the state’s average during that year. And it’s down 26 points from the building’s score in 2014.

The candidates at Monday’s forum, sitting near a wall lined with VHS tapes, discussed possible ways to integrate senior citizens into the community and their goals to improve the quality of life at Attick Towers.

Pancho, who said she worked in the mental health field 14 years, emphasized the need for communication. In a follow-up interview with The Diamondback, she said services like medication management and therapy could help the residents of Attick Towers on an individual level.

“You’re in a part of your life where you want to live comfortably,” Pancho said.

If elected, Gregory said he would replace the carpets in the Attick Towers community room during his first term. He’d also work to create a van program to assist residents with transportation around the city, he said.

Dennis said that one of the issues facing seniors is communication about city affairs. He said that broadcasting City Council meetings on TV and boosting print media could be a solution.

“They’re isolated,” Pérez said. “They stay in their home. They don’t come out.”

Just 14.5 percent of eligible voters turned out in the city’s 2017 elections, according to city documents. Brennan, who chaired the city’s now-disbanded aging-in-place task force — which aims to support the city’s elderly — said covering relevant issues should incentivize Attick Towers’ residents to vote.

Wojahn, who said he was working to make College Park a “top-tier college town,” said he also believed in delivering a “top-tier” quality of life for Attick Towers residents. Voters turn out for elected officials who will be there for them, he said, later estimating he’d been to Attick Towers about 30 times to attend community events or meet with the resident council.

“I’ve been there,” he said. “I’ve made myself open and available to be your advocate and to make sure that your interests are being heard.”

The city’s seniors committee, a product of the aging-in-place task force, is focused on transportation options for seniors, in-home services and community engagement, Brennan said.

Malsawma, who was born in India, said it is important for the city’s housing authority to understand the need for affordable living spaces. If elected, she said, she’d institute focus groups with residents to help understand and address their concerns.

As it stands, Pérez said, residents feel like they’re often ignored. But at the end of the forum, she said, they’d been heard.

“They feel that they’re an isolated island, that they’re by themselves, that no one cares,” she said. ”And they wanted a voice.”