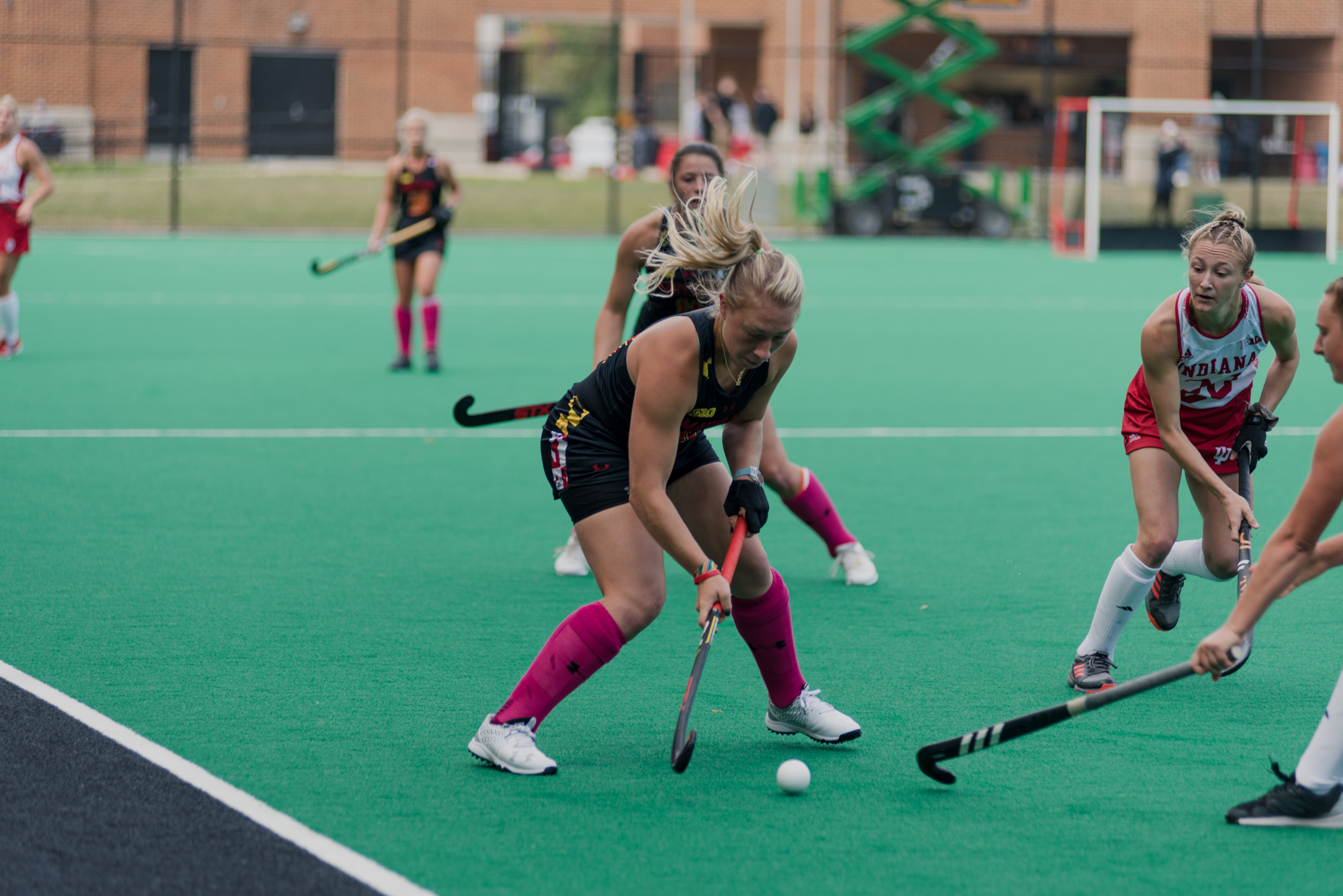 After scoring her second goal in Sunday’s matchup against Indiana, Maryland field hockey forward Mayv Clune jogged off the pitch and into the arms of her teammates, who greeted her with a vociferous reception as soon as the ball rattled the back of the cage.

By that time, many of Maryland’s starters had given way to substitutes like Clune and forward Lizzy Dessoye. But the heightened intensity remained, pushing the Terps to build on what was already a crooked scoreline.

Clune’s goal sealed a 6-0 victory, capping off a valuable weekend for coach Missy Meharg’s squad in which its depth was the defining factor in victories over No. 6 Iowa and the Hoosiers.

“We do have a really deep bench,” Dessoye said. “In practice, we are practicing like we are the starters. We have that mentality that the team needs us — we’re going to work hard.”

Maryland’s starting lineup has remained largely unchanged over the course of the season, fostering a synergy evident across all parts of the pitch.

The bench unit is undeterred, though, instead focusing on keeping a composed mentality during games and servicing the team’s needs.

“You never know if you’re going to have to go in the last five minutes and be a game-changer,” Clune said. “You’re always mentally turned on.”

That frame of mind pushed midfielder Taylor Mason to desert her post in the middle of the third period and drive into the shooting circle, sweeping home Maryland’s second goal in its 3-0 victory over the Hawkeyes on Friday. And her teammates were delighted with her work rate, a consistent characteristic throughout the team’s bench options.

“I’m really excited for her,” forward Madison Maguire said. “She’s been working really hard so when I saw she was up there and she got that goal, I was so happy for her.”

Off the back of Mason’s performance — one that earned her the “game shell” as the Terps’ player of the game — Meharg was looking to get depth players involved on Sunday.

“We knew beforehand that this would be an opportunity to play a lot of players,” Meharg said.

And the depth didn’t disappoint, with Clune and Dessoye the standouts of a greatly-rotated Maryland side in which 21 players clocked 15 minutes or more.

Clune, a redshirt sophomore who is still recuperating from a torn PCL that robbed her of her freshman year, has impressed in limited minutes this season, scoring three goals and adding one assist in a little more than 150 minutes of game time.

On Sunday, she was a menace to Indiana’s backline, carving out pockets of space to put pressure on an outstretched Hoosiers defense. She lost her marker to score her first goal — a tap-in from just outside the goalmouth — before wriggling her way out of two tackles to slot home her second score of the game.

“Mayv Clune is a natural goalscorer,” Meharg said said after the match. “Some of the goal shots and elimination skills that you saw today — she can do that.”

Meanwhile, Dessoye returned to action on Sunday after missing the past two games and made an impact. With the ball bouncing around in the shooting circle after a penalty corner, Dessoye lofted it above goalkeeper Shelby Querry — her first goal since Oct. 28, 2018 against Michigan State.

The Terps’ bench unit has been faithful in its dedication to the team’s needs. And ultimately, that depth has proven to be a major force for Maryland in its recent games.

“We do it for each other,” Clune said.