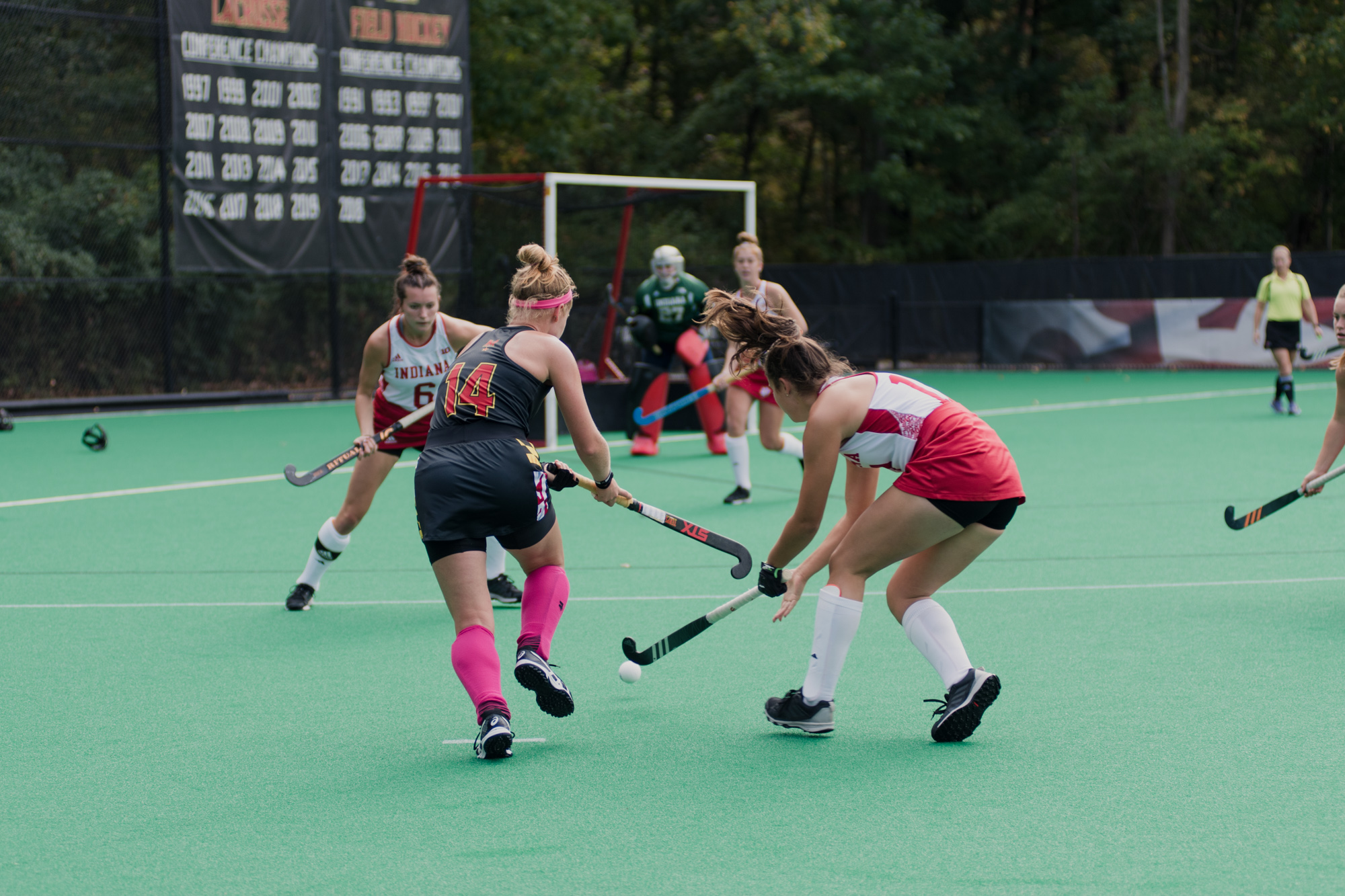 Maryland field hockey midfielder Kelee Lepage was ambling toward a growing crowd of her teammates when coach Missy Meharg wrapped her arm around the senior.

Lepage was an omnipresent face in a largely changed fourth-quarter lineup with the game all but decided, as the Terps utilized their roster depth to dominate Indiana, 6-0, on Sunday and push their win streak to 10 games.

And the senior shepherded Meharg’s squad brilliantly as it rotated, helping the Terps earn their third consecutive clean sheet.

Meanwhile, Maryland’s attack impressed throughout, with its six goals representing its highest tally this season. And the bevy of goals also represented the Terps’ unrelenting attack against the Hoosiers despite a series of lineup changes that could have threatened to alter their flow.

“We just zoned in on everyone doing their job,” forward Mayv Clune said. “When we’re able to do that, we’re obviously able to be successful.”

After Maryland met ranked opponents in each of its past six matches, Sunday’s game presented them with a unique challenge: maintaining intensity against a weaker opponent.

Armed with that mindset, Maryland came out firing, forcing goalkeeper Shelby Querry into two saves within the opening four minutes.

Ninety seconds later, the Terps were on the board. Forward Jen Bleakney picked up a loose ball just outside the goalmouth before flicking it toward midfielder Linda Cobano. Unmarked, Cobano gave Querry no chance, rifling the ball into the roof of the net to record her eighth goal of the season.

Forward Bibi Donraadt fired a backhanded effort into the top corner toward the end of the first, doubling Maryland’s lead and bookending a dominant opening frame in which all five of Maryland’s attempts were on goal.

“You have to frame the goal cage in goal-scoring positions on the stroke mark or on the two goalposts,” Clune said. “We did a really good job of being deliberate and diligent with filling those spaces and when we do that, we’re able to succeed no matter what.”

It was more of the same for Meharg’s squad in the second quarter, outshooting Indiana 4-0.

If not for Querry, the scoreline would have been far more convincing, with the Hoosiers netminder making a series of impressive saves in the second — none more so than a diving save to deny defender Bodil Keus off an early penalty corner.

But Querry couldn’t hold the Terps down for long, especially as they continued to earn penalty corner after penalty corner. Clune was the beneficiary of a clever set-piece routine, floating toward the back post before tapping the ball in after a pass from midfielder Nathalie Fiechter.

Given the Terps’ first-half domination, the final 30 minutes provided an opportunity for Meharg to get sparsely used players involved in the action. Skye Joegriner replaced Noelle Frost in net, while forwards Lizzy Dessoye and Sam Zywna featured heavily in the third.

Cobano fired home from a penalty corner to secure her third two-goal game of the season. And two minutes later, the Terps would push their lead to five, with the ball bouncing in and around the shooting circle. Dessoye got the vital touch, though, knocking the ball over Querry for her first goal of the season.

“It’s mostly staying calm in the circle,” Dessoye said. “We’re taking what we do in practice into the games — using our opponents, and just staying calm and gritty.”

And as the game entered its final frame, Meharg continued to rotate the squad, providing opportunities for a multitude of players to leave their mark on a game that Maryland dominated from start to finish.

“The most important thing is to always be ready,” Clune said. “Always being ready to help serve the team in any way possible.”