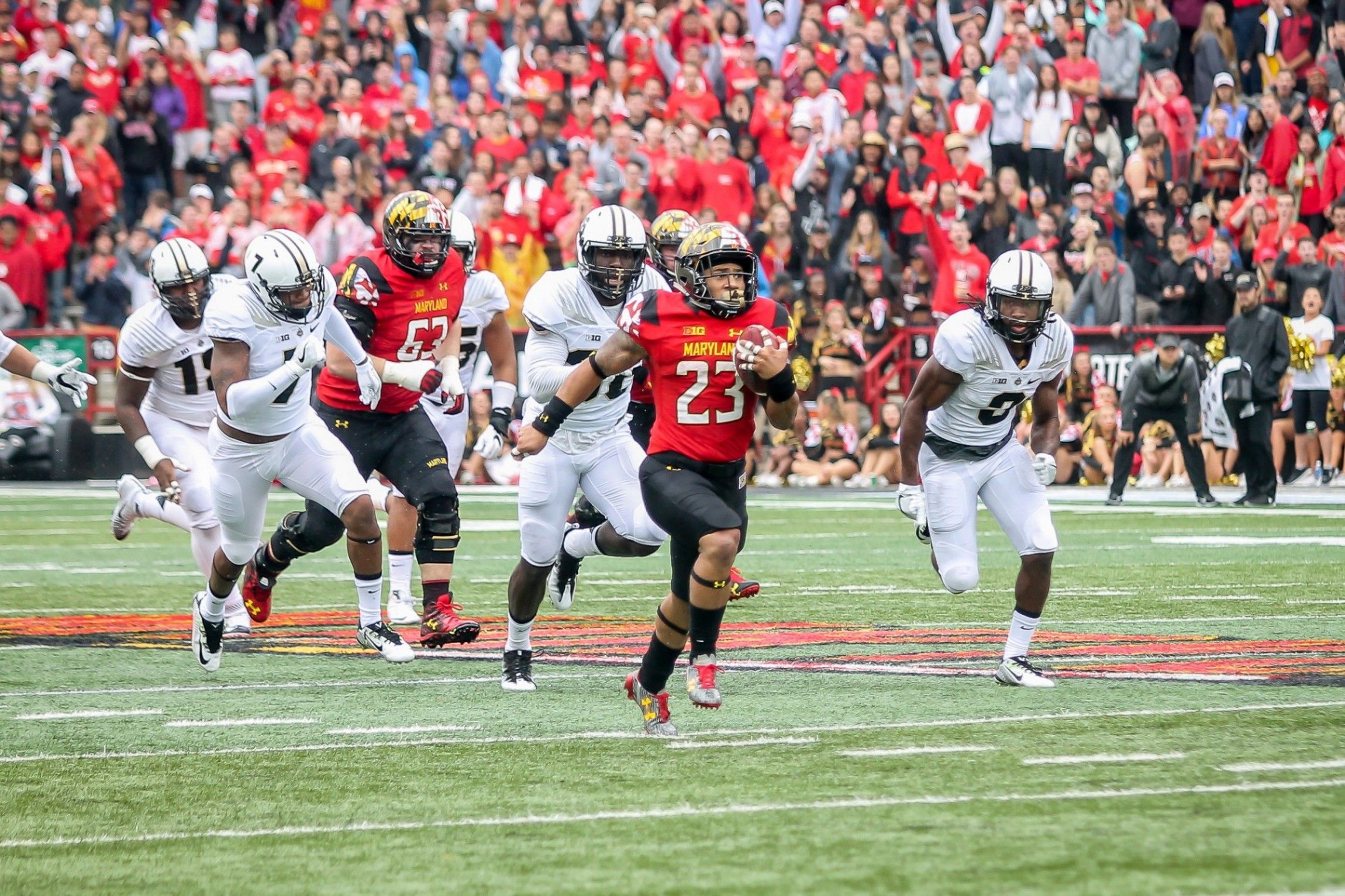 Running back Lorenzo Harrison sprints past defenders for a touchdown as Maryland football beat Purdue, 50-7, at Maryland Stadium on Oct. 1, 2016. (Marquise McKine/The Diamondback)

Maryland football is back above .500 on the season and the Terps have a decent chance to improve to 4-2 against a banged-up Purdue team. Maryland is 2-0 all-time against Purdue, with only one meeting happening in Big Ten play, but Saturday could be a different story as the Terps are traveling to West Lafayette for the first time.

We talked with Joe Duhownik of the Purdue Exponent to learn more about the Boilermakers. Our conversation has been lightly edited for clarity.

Things have gone south for the Boilermakers compared to last season. What has gone wrong this season that has caused the 1-4 start?

It’s hard to get any sort of momentum going when you have as many injuries as the Boilermakers. The Nevada loss left a bad taste in their mouths, and Purdue should have won that game. But the rest of the season they have been battling with things teams never go through. The Boilers have over ten players injured right now, including their three biggest stars in Rondale Moore, Elijah Sindelar and Markus Bailey. With that being said, they still almost beat a now 5-0 Minnesota team. The potential for them is still there, but you’d be hard-pressed to find precedent for a season quite like this.

How has Rondale Moore’s injury in Purdue’s Week 4 loss to Minnesota affected the flow of the offense over the rest of the Minnesota game and the Penn State game?

After Moore went down in the Minnesota game, I think it allowed the offense to play a bit more freely. Obviously Moore is a star, and the offense should no doubt run through him, but an over-reliance on one man, especially with a backup quarterback who can’t get him the ball as efficiently as the starter can, will hurt any team. Losing Moore forced the Boilers to explore all of their options, and consequently showcases just how well receivers Jackson Anthrop and David Bell can be. If the Boilers can continue to spread the ball around when Moore returns, their passing game can become even more deadly.

Moore is one of several big-name players that the Boilermakers have lost so far this season, including starting QB Elijah Sindelar and LB Markus Bailey. Overall, how has the team been affected by injury and how have the back-ups stepped up this season?

I think the backups, for the most part, have done their job. You can’t expect them to do it all. When a player goes down, it’s next man up, but the rest of the team has to improve around them. That part is essential. Jack Plummer has been consistent, but with diminishing receiving core, it’s hard for him to get much going.

Who are a few players to watch on either side of the ball that people aren’t necessarily talking about?

On offense, expect more out of running back King Doerue. He had a breakout game against Minnesota, and even though he wasn’t great against Penn State, he showed great potential as a future leader on this team. Defensively, linebacker Ben Holt is someone that can always be counted on to make 10+ tackles a game. He’s a workhorse and stepped up in the absence of Bailey really well.

They can effectively establish a run game. While their passing game is still spotty, they have shown promise all season long.  With Moore still possible to return, they can definitely still shine in the air. The run game, hindered by a young and inexperienced offensive line at the moment, would take the pressure off of Plummer and the young receiving core.

They can exploit Purdue’s secondary. It’s no secret they have struggled to defend the pass, and if they don’t change things up they will continue giving up big passing plays.