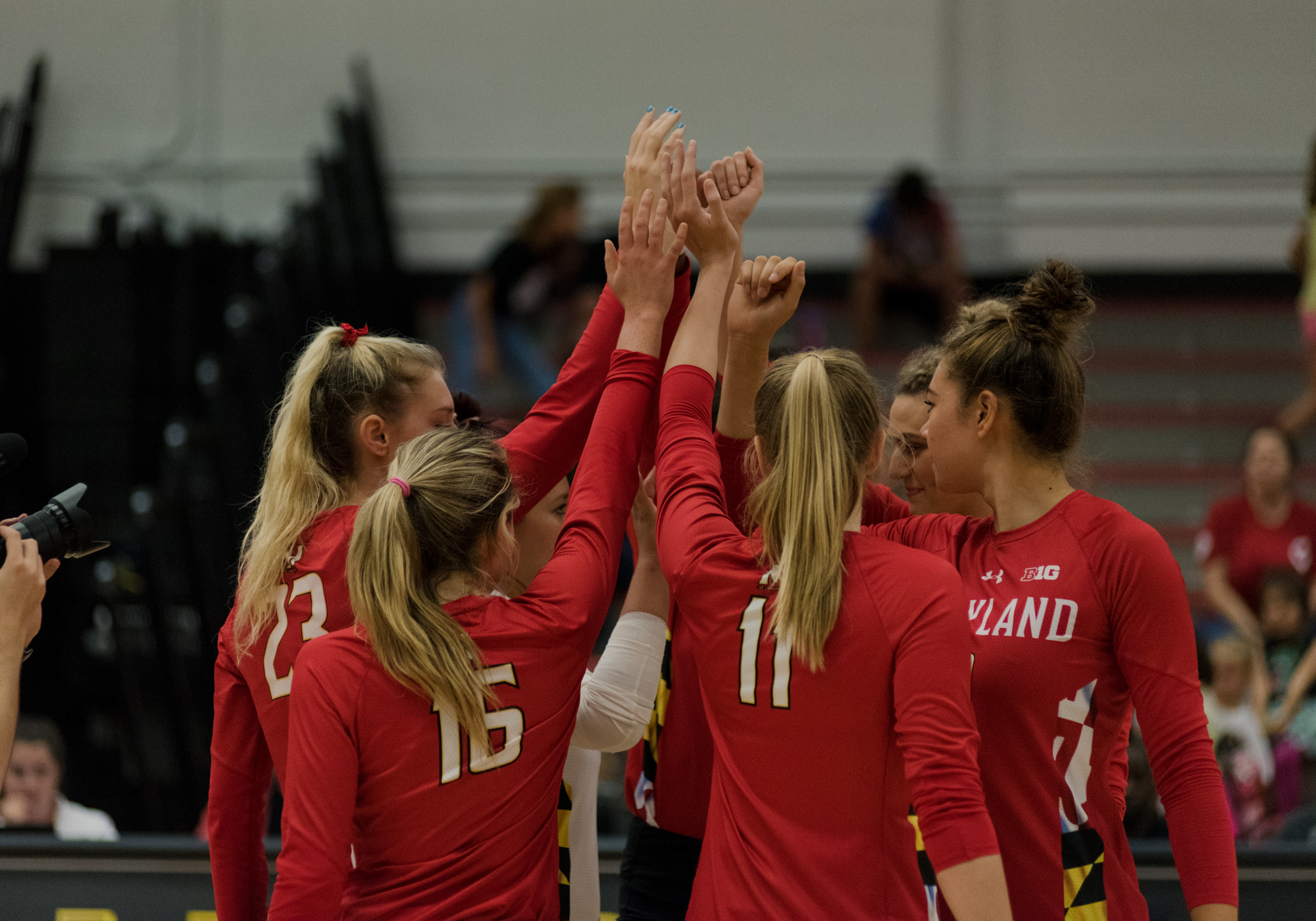 Maryland volleyball huddles up during its 3-2 loss to George Mason on Sept. 14, 2019. (Gabby Baniqued/The Diamondback)

For a program still adapting to the standards of the Big Ten conference, Maryland volleyball had a breakthrough week. First, the Terps notched their first-ever victory over Michigan State in a 3-2 shootout Saturday at Xfinity Pavilion. Then, two days later, coach Adam Hughes announced the team’s plans to go on an 11-day European tour in June 2020.

Saturday’s win helped Hughes’ squad shift its focus away from the start of Big Ten play, which began with three straight losses for the first time since 2016.

This weekend, Maryland will take on perennial NCAA powerhouse Penn State, the No. 8-ranked squad in the country. But as the Terps attempt to adapt to the Big Ten’s level, the chance to win a set against the Nittany Lions in State College for the first time could serve as a barometer of where the team stands.

“We have an opportunity in front of us against an extremely good team,” Hughes said. “These are matches where I think you can learn a lot about yourself.”

[Read more: Maryland volleyball announces it will go on European tour in summer 2020]

Hughes understands the difficulty of playing at Penn State better than anyone. A native of State College and a graduate of the university, Hughes spent nine seasons working with its volleyball program.

Knowing the challenge his team is tasked with Friday night, Hughes wants his players to tap into a competitive approach.

“A lot of these girls came here because they wanted to compete against the best,” Hughes said. “They get the opportunity to play in front of big crowds at big programs, but they have to have the right mentality going into it.”

The current crop of players on Maryland’s roster have yet to find success against the Nittany Lions. Since joining the Big Ten in 2014, the Terps have lost 24 of the 26 sets played in those matchups.

“Going up against a top-10 team, we just have to play hard,” outside hitter Erika Pritchard said. “I feel like that’s been our focus.”

Following the match against the Spartans, Maryland gained some momentum that was absent for the start of the Big Ten season. The Terps trailed 2-1 before winning the fourth and fifth sets.

Pritchard and middle blocker Katie Myers led the charge on Saturday, combining for 27 of Maryland’s 51 kills. Pritchard now ranks third in the Big Ten with 227 kills.

For the second straight week, the Terps have had a full week to prepare for Friday and Saturday night matches, an obvious benefit for a team trying to catch its stride in the conference.

“Having a full week of practice is always great,” setter Nicole Alford said. “We’ve been able to get back to focusing on our side and what we’re doing.”

This week in practice, Maryland felt proud of its performance Saturday night, but it doesn’t want to stop there. They will have an opportunity Friday to make another statement, this time against Penn State — even if that only involves winning a set in State College for the first time.

“When we came in on Monday, we said we had a great win, but we said we wanted to keep going with that,” Alford said. “We keep remembering how good that win felt, and we want to keep doing it.”