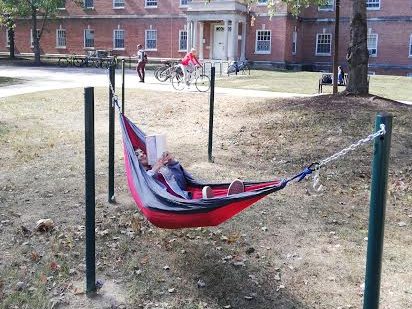 Paniz Nafisi, a freshman enrolled in letters and sciences, uses the "Hammock Haven" in the Cambridge Community. (Anna Artazova/For The Diamondback)

By Anna Artazova
For The Diamondback

Since the mid-20th century, a red buckeye tree has stood outside H.J. Patterson Hall. Considered a “Champion Tree” by the Prince George’s County Big Tree Program, it is the largest of its species in the county.

But its status is now in question, according to the University of Maryland Arboretum and Botanical Garden. Human damages on Maryland Day 2017 — likely caused by a hammock or climbing — resulted in irreversible injury to the prized tree, said Karen Petroff, the arboretum’s assistant director.

A hammock, when stretched between branches, peels the bark off a tree. If the bark is thin, then the tissue layer under it — essential for plant growth — will be easily harmed. As a result, the tree can’t properly receive vital nutrients, which prevents growth and kills the tree.

And at least six trees have been significantly damaged, said Petroff.

“I am always delighted to see students out and enjoying nature, enjoying the tree canopy, enjoying the landscape,” said Petroff. “It can be an incredibly enjoyable experience as long as it’s done with that little bit of knowledge that helps us prevent unintentional damage. In doing so they may be endangering the very thing they want to be close to.”

Some universities, such as Michigan State University, have banned hammock use on their campuses, as tree replacement costs can reach thousands of dollars, said Petroff.

Instead of banning hammocks, this university is trying to work with the students to find the most effective solution.

Calvin Burns, a junior civil engineering major, is collaborating with multiple university departments, including Facilities Management and Residential Facilities, in coming up with a convenient alternative to hammocking in trees: The Hammock Haven.

As a self-proclaimed “hammock-lover, but also a tree-hugger and sustainability hippie,” he set up a prototype. The installation, which cost more than $3,000, can be found inside the Cambridge Community, in a cozy nook between Cumberland and Centreville halls.

The Hammock Haven is composed of 10 metal posts placed in a radial semi-circular pattern. Each post has a metal chain for quickly securing a hammock. The structure can support up to five hammocks at a time.

Burns said installation of The Hammock Haven’s sign will be soon. Even without it, however, students have already taken notice of the project.

“Not only is it convenient, but I don’t have to wrap everything around a tree. I just hook [the hammock] up to the chain,” said Regina Trevino, a freshman mechanical engineering major. “I don’t have to worry about it falling.”

In its first month, The Hammock Haven has become a popular spot for residents of the Cambridge Community, but Burns said he hopes the prototype will launch a campus-wide expansion.

Some students, such as Kaitlyn Dold, a sophomore chemistry major, said she would like to see the posts installed on McKeldin Mall and other green spaces around the campus.

Dold said the mall is a “prettier” place for hammocking on a warm day.

Burns said he also wishes to see the project expand to the mall, as well as the Washington Quad.

Trevino said she prefers the design to using trees.

“It’s nice to have an outdoor space where you don’t have the trees on top of you, so you don’t have to worry about leaves or bugs falling on you,” she said. “If I want sun, I’ll go to a space with sunlight; if I don’t, I’ll go to space in the shade.”