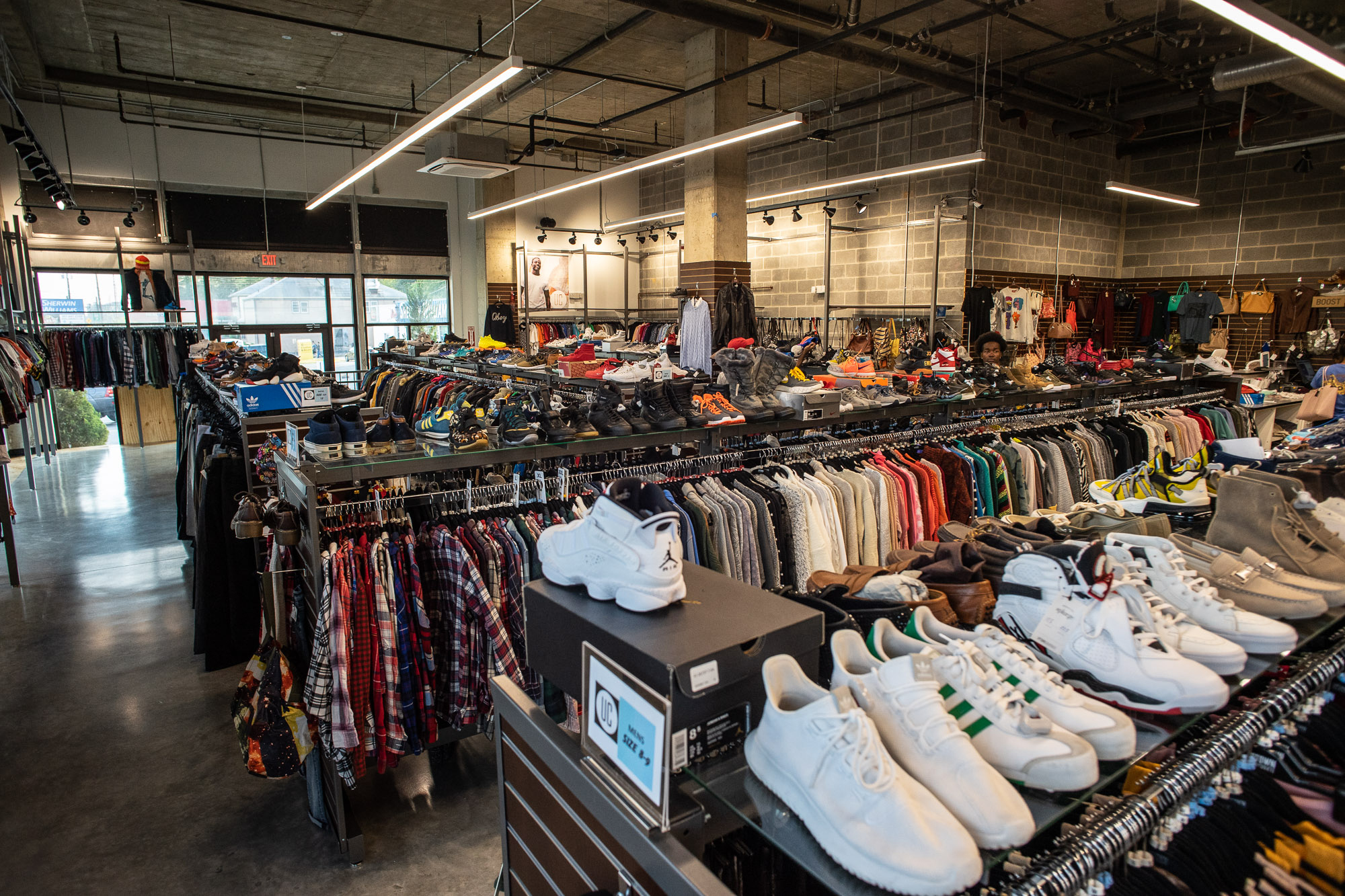 The thrift store — located below Monument Village apartments on Route 1 — had its grand opening Sept. 26 to a line of waiting customers snaked around the sidewalk outside.

Although the store has technically been open since July, its only service was buying gently-used clothes, shoes and accessories. By Sept. 26, though, it had reached inventory capacity — meaning it had the amount of items it needed to start selling.

Uptown Cheapskate offers rows upon rows of clothes, with at least 15,000 items, said Elizabeth Butler, its owner and manager. It’s housed in an industrial-style building with exposed cement bricks.

The store buys gently-used clothing, shoes and accessories for cash or for even more — 25 percent more — in store credit. Those items are then put up for sale. Though the store focuses mostly on used items, it also offers new items made by wholesale clothing suppliers and local artists.

Butler said she was happy with the turnout the store got on the day of its grand opening, and that she hopes her business can provide a place for all people to find things they like.

“I couldn’t ask for anything better. No drama, no pushing, no shoving.” she said, folding a colorful pile of clothes sold to the store. “It was great.”

In a statement, Butler wrote that the store was “delighted with the welcome we have received from the University of Maryland and greater Prince George’s County communities.”

If the store is unable to purchase an item from a customer due to style or condition, they will either donate it to charity on the customer’s behalf, or the customer can keep the item.

Uptown Cheapskate’s opening comes amid a slew of development in College Park. LaTAO Hot Pot opened nearby under the Enclave in August, and new restaurants have been popping up along the Route 1 corridor as part of the city’s revitalization effort. However, Uptown Cheapskate is the only recent addition that sells clothing, shoes, and accessories.

[Read more: “Continuing on the legacy”: The Maryland Food Co-op lives on as a pop-up thrift store]

Gabriela Navarro, a Greenbelt resident, said the location is especially great for everyone in the area.

“I think that this is a good business for college students,” she said. “That way they don’t have to spend so much money, and it’s close by, so they can walk back.”

The store is about a mile and a half from the main entrance to the University of Maryland’s campus — amounting to approximately a half-hour walk.

Kevin Beal, a senior computer science major, said he thought the store could be a convenient addition to College Park because of the option of selling his unwanted clothes.

“I actually took a lot of time this summer to try and sift through a lot of my wardrobe and pick [out] stuff, so a lot of those clothes that I’m not wearing anymore this place will make some use [of],” Beal said.