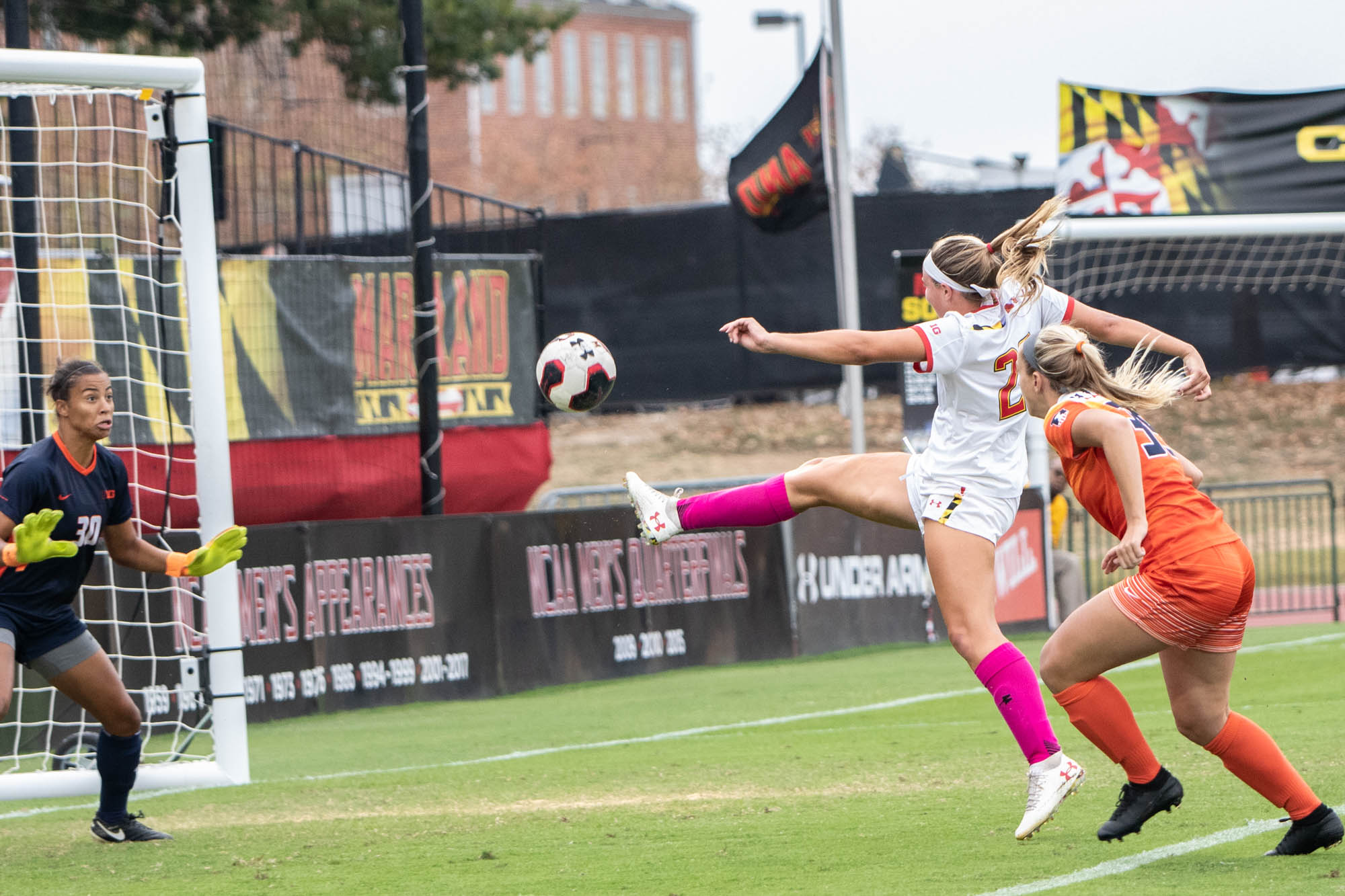 Defender Adalee Broadbent gets a touch on the ball for her first goal in Maryland women's soccer's 6-2 win over Illinois on Oct. 6, 2019 at Ludwig Field. (Richard Moglen/The Diamondback)

When Anissa Mose curled in a corner kick to open up scoring for Maryland women’s soccer against Illinois, she got the offense rolling to a six-goal output — the program’s most since 2013.

Mose’s fifth-minute tally was the fifth time the Terps have scored in the opening 10 minutes of a match this year, igniting an offense that’s thrived off early production this season.

Coach Ray Leone has emphasized scoring early in games to put pressure on Maryland’s opponents, and the effort expended to do so paid off in the team’s 6-2 trouncing of the Fighting Illini on Sunday.

Throughout the season, the Terps’ attack has pressed down the field in the opening minutes of matches in an attempt to pull ahead. And when they score in those early moments, the end results have been promising.

“Coming in strong in the first five minutes of the game, that sets the pace for the tone of the game,” midfielder Loren Sefcik said. “When we score the first goal, our mindset is to keep going.”

Those early goals have provided a spark for the rest of the game, too. In each of those five wins, Maryland has put up at least two goals. Sefcik helped extend that streak against Illinois, assisting on the Terps’ second and fifth goals and later adding a tally of her own — her first of the season.

Defender Adalee Broadbent, who scored two goals against Illinois, also said attacking early has been important to the team’s success. Although Broadbent typically does not move forward during open play, she is one of the go-to players on set pieces.

Broadbent found the back of the net twice Sunday, with both of her goals coming on set pieces — the first on a free kick by Jlon Flippens and the second on a corner kick taken by Mose. The goals were the first two of her collegiate career.

“We want to put as much pressure on them as we can to get them uneasy and get us the ball,” Broadbent said. “I think it’s helped us a lot.”

An offensive breakthrough, particularly early, also provides the defense breathing room as the opposition searches for an answer.

And the Terps’ play on the field has backed that up. In games where Maryland scored in the opening 10 minutes, it has kept three clean sheets and outscored opponents 16-3.

Even with all of their success when scoring early, the Terps have had opposite results when they’re held in check, going 0-4 when they haven’t scored first this season.

Maryland will hope the latter trend isn’t the case when it heads on the road again to play Nebraska and Iowa. Despite how strong and efficient the offense moved against Illinois, Leone said the team needs to reset and prepare for its next two matches without looking back at previous games.