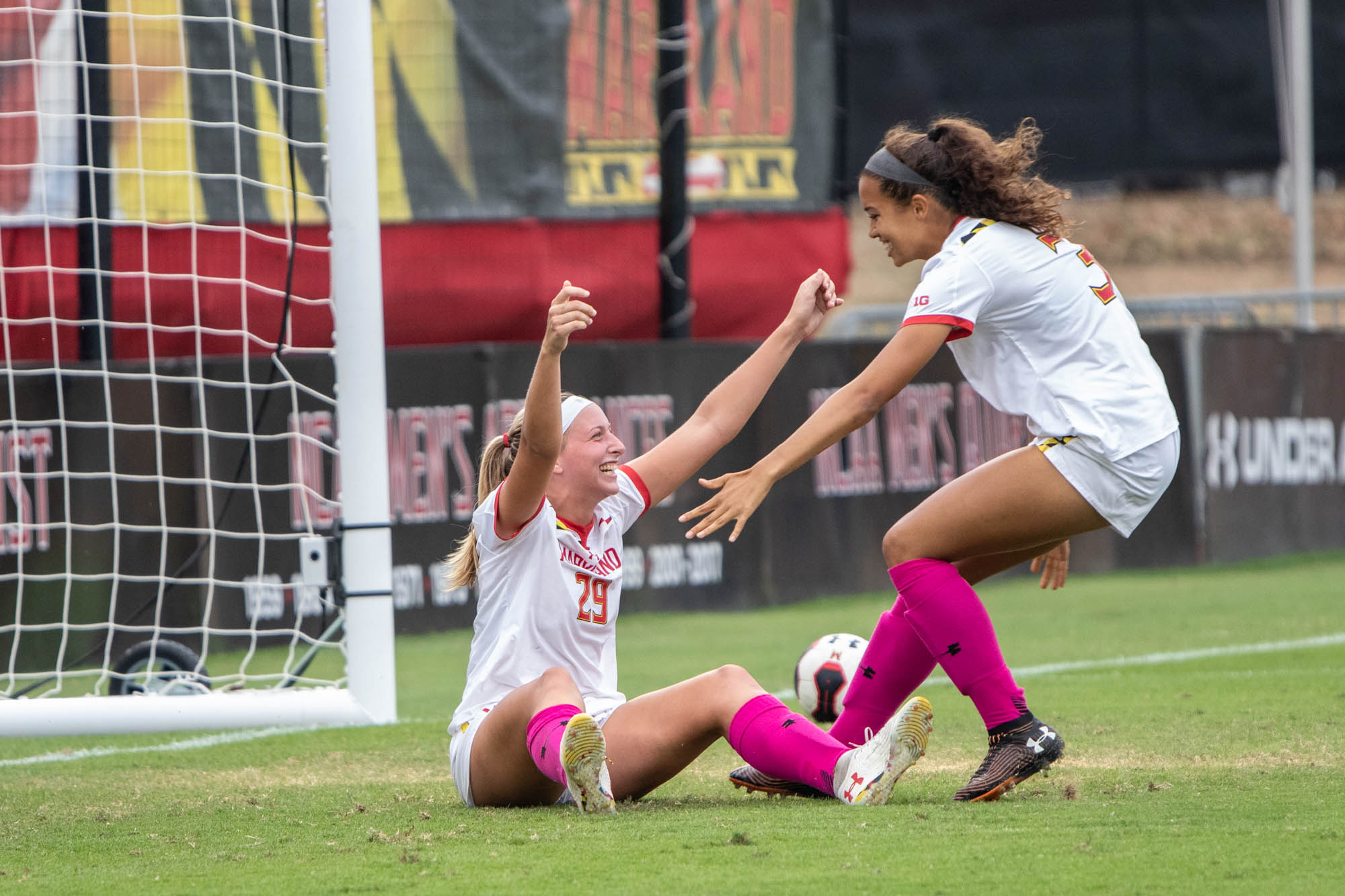 Jlon Flippens raised her hand near midfield, signalling the start of a free-kick routine during Maryland women’s soccer’s match against Illinois. She launched the ball into the near side of the 18-yard box, looking to get the Terps on the board once more after their lead was cut in half minutes earlier.

The ball found defender Adalee Broadbent in the box, and as she struggled to keep off a defender, she swung her leg into the air to meet the path of Flippens’ delivery before tumbling to the turf, watching as her shot sailed past goalkeeper Jaelyn Cunningham into the back of the net.

Forward Keyera Wynn was the first Maryland player to reach Broadbent to celebrate the defender’s first college goal. The breakthrough helped the Terps in a free-scoring game, putting away the most goals since joining the Big Ten in Sunday’s 6-2 win over the Fighting Illini.

“It was a great accomplishment for us,” Broadbent said. “We’ve struggled in the last couple of games getting goals, so it was nice to finally see them go in.”

Maryland returned home after consecutive road games against Rutgers and Ohio State, which included an upset of the then-No. 20 Scarlet Knights before falling 1-0 in Columbus, Ohio. With usual starting goalkeeper Erin Seppi out for the second straight game, freshman Nicole Kwoczka made her first career start.

Kwoczka had played the second half of the Terps’ loss to the Buckeyes, where she kept a clean sheet and made a few key saves to keep Maryland in the match until the final whistle. Her job was made easier Sunday through a lethal attack that found goals early and often.

Midfielder Anissa Mose took a corner kick in the fifth minute that took a deflection off an Illinois defender and crossed the goal line. It was the fifth time this season that the Terps have scored in the opening 10 minutes.

About 10 minutes later, leading-scorer Alyssa Poarch doubled Maryland’s lead. The forward took a lay-off pass from midfielder Loren Sefcik outside of the box before rocketing a shot to the opposite end of the goal for her seventh tally this year.

“They were flowing,” coach Ray Leone said. “It was really exciting to see all of them get touches on the ball. It was fantastic attacking play by them. It’s not often we see all of them touch the ball the way we did.”

Illinois began to find opportunities after the onslaught of opportunities from the Terps. In the 19th minute, a dangerous ball came into the box for the Illini attack, but Kwoczka was able to get to the ball before an opposing player.

Illinois finally found their way on the board in the 35th minute from their leading scorer Makena Silber. A failed headed clearance from Mose found the boot of Silber as she ran into the box, finishing with a volley.

However, Maryland was quick to respond, getting itself another goal just three minutes later through Broadbent’s volley off a free kick. Five minutes later, Mose took another corner kick for the Terps that found the head of Broadbent. Her header went into the top right corner of the goal, narrowly passing a Fighting Illini defender situated on the line.

“She’s a fantastic, consistent, winner of a person,” Leone said of the goal scorer. “It was exciting to see, she’s been close so many times. A lot of her goal chances have been saved off of the line, and so for her to get that thrill today was really cool to see.”

At the half, the Terps led 4-1, tying their record for most goals in a half in Big Ten play. The record was originally set last year against Iowa, when Maryland scored four second-half goals.

The final 45 minutes of play began slowly for both teams, but Illinois held more possession early on. In the 58th minute, the Fighting Illini found their best opportunity with Silber making her way into the box and taking a shot against Kwoczka. But the effort took a deflection off the post and bounced away.

The Terps immediately took the ball and rushed down the field, getting Poarch into space on the wing, where she put away her eighth goal of the year. Sefcik, after assisting two goals, found one of her own, getting on the end of a free kick in the corner for Maryland’s sixth tally.

“This is our first goals of the season,” Sefcik said of Broadbent and herself. “It was pretty exciting to both score.”

With just under five minutes remaining, Meredith Johnson-Monfort got into the box to put away a consolation goal over Andi Wenck, who came in for Kwoczka in net. The Terps finished out the game from there, securing a dominant 6-2 win.

“It was an attacking attitude the whole game,” Leone said. “They really embraced this opportunity and they played fantastic.”