“It’s like a family”: How College Park’s weekly 5K has brought the community together 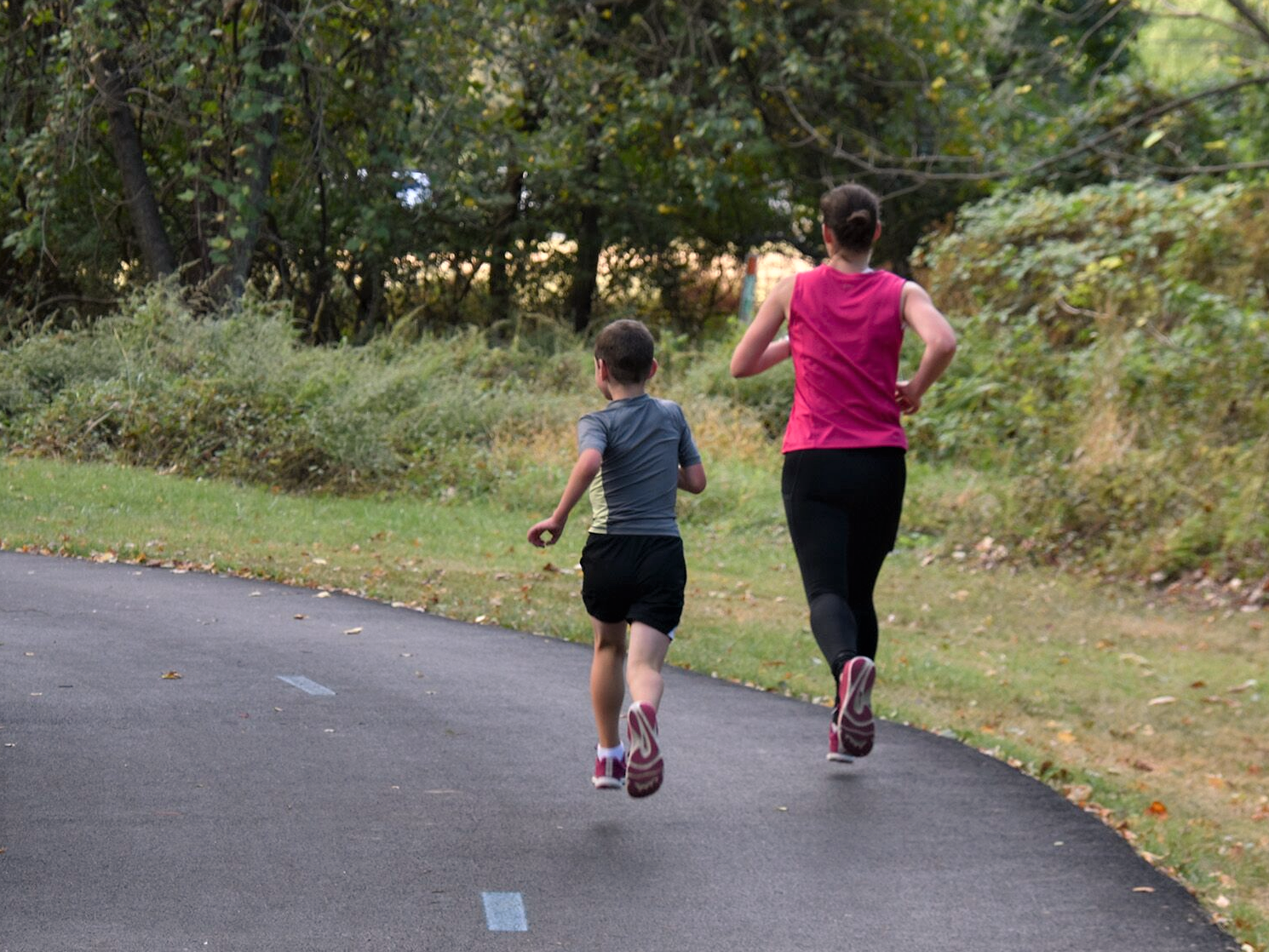 Tara Mease often jokes that she and her husband only wake up at 4:30 a.m. on the days they want their son to breathe.

No matter where they are, what day of the week it is or what the weather is like, Mease and her husband have to make sure their 6-year-old, Xander, gets outside and exercises early in the day.

Xander has cystic fibrosis, a genetic disease that thickens the naturally occurring mucus in his body. It makes it difficult for him to eat and breathe without a rigorous treatment schedule. Most days, that schedule includes a 10K run with his mom, designed to help clear out his lungs and get him breathing hard with lots of uphill and sprints.

On Saturdays, you can find Mease and Xander on Paint Branch Trail at 9 a.m. sharp, alongside about 100 others. They’ll be preparing for parkrun, a weekly timed 5K in College Park.

The run — held year-round, rain or shine — sees attendees from ages 4 to 84, from walkers to seasoned cross-country athletes. No matter their age or ability, a cheer roars up from onlookers when a runner crosses the finish line. Some volunteers high-five the finishers as they whiz past, red-cheeked, panting and grinning.

This city’s parkrun is the largest offered in Maryland or Washington, D.C., with a recent average of 150 attendees a week, said Colin Phillips, a member of the communications and community development team for parkrun USA. Around 2,500 different people have completed the run since the program arrived in College Park in 2016, and it’s seen more than 300 volunteers.

It’s an event that helps promote fitness and health, community members say, a race that focuses more on support than speed — and for many, a place to find belonging.

“The inclusivity is beautiful,” Mease said. “It’s wonderful to be a part of that.”

“The heart of this community”

From the moment she discovered parkrun, Andrea Zukowski knew she had stumbled upon something special.

A few years ago, Zukowski and Phillips, her husband, were visiting family in England. One Saturday, Phillips’ brother, a runner, invited the couple to check out a parkrun he attended. They were in a small, quiet town, with nothing but family homes, a grocery store and a pub. But on Saturday mornings, she said, it transformed.

“[In] this sleepy little town, the heart of this community is on Saturday morning at 9 o’ clock,” she said. “It’s in the parkrun.”

After that trip, Zukowski and Phillips — both of whom are University of Maryland faculty — would attend parkruns every time they went back to England.

Zukowski, a College Park resident, began to think about how she could bring the tradition back to her own community.

“I immediately saw the potential it had for building community in places that are not necessarily conducive to having community,” Zukowski said.

Parkrun began in 2004 in Teddington, England. Now, it’s a global organization with over 1,500 events worldwide. The initiative spread to the United States in 2012, and by the time it reached College Park in 2016, there were only seven other runs in the country.

That is, until she attended the launch of the first D.C. parkrun at Fletcher’s Cove in January 2016.

The Saturday after the Fletcher’s Cove launch, Zukowski, Phillips and various community members began to meet on the Paint Branch Trail, where parkrun has a course now.

After holding 30 unofficial Saturday runs — some of which College Park Mayor Patrick Wojahn attended — College Park parkrun began on Oct. 15, 2016. Now, College Park’s parkrun is one of 40 events in the U.S., according to the organization’s website.

Participants begin and end at the same spot, where the trail intersects Acredale Community Park. Their route winds through shaded trails along a creek, over wooden footbridges and around a golf course.

Wojahn is running for reelection in November, and one of his campaign promises is to personally complete 100 parkruns. He’s done 82 so far, 81 of which have been in College Park.

“It’s such a supportive way for people to get exercise and get in shape,” Wojahn said.

For Mease and Xander, parkrun has become about interacting with other regulars as much as it is about fitness. Aside from allowing Xander to explore running beyond what his lungs need, it’s given him a community built around something he’s passionate about, Mease said.

Mease and Xander take part in an annual fundraising walk for the Cystic Fibrosis Foundation. And when “all the friends at parkrun” learned about it, they not only encouraged Xander, but donated to the cause as well, Mease wrote in an email.

And those who run the weekly parkrun aren’t the only ones who have found community there.

College Park resident Hump Plotts and his wife Lisa Wilson have been coming to the parkrun since its beginning. Plotts has never run on the trail, but until he experienced some health issues last year, he didn’t miss a single Saturday of volunteering, he said.

But when he couldn’t make it to parkrun, parkrun made it to him. Several of the event’s regulars came to visit him at his home in College Park and at the hospital while he was recuperating, which Plotts thought was “neat.”

He volunteers each week, standing at a part of the course near the Paint Branch Golf Course, where a road intersects the trail. He keeps runners safe from passing cars, smiling and bellowing a friendly “hello” to anyone that passes.

“It’s like a family,” Plotts said. “It’s a bunch of siblings whose names I don’t know.”

Phillips said he thinks the regularity and inclusivity of parkrun is what helps create the sense of community so many participants find in the event.

“People feel like they belong,” Phillips said. “They feel connected in a way they’ve never been before, and they feel valued. People want to feel that they matter.”

With College Park parkrun’s third birthday approaching, its founders are thinking ahead to what they want for the event’s future.

Though they’ve culled a few regulars from the graduate student and faculty populations at this university, Phillips said he’d like to see more undergraduates at the weekly run.

“One of the points of connection that we had hoped to strengthen is the connection between the large student body and folks in the city,” Phillips said. “Actually, that hasn’t really happened.”

Phillips said he thinks a mutual mistrust between city residents and students contributes to the lack of undergraduates who show up, but he hopes attracting a few students to parkrun and converting them to regulars might bridge some of that apprehension.

Plus, the growing popularity of the run means that it will eventually outgrow its current course, Zukowski said, which means she and Phillips will have to find a new place to hold the event.

For now, however, College Park parkrunners will show up to the Paint Branch Trail, the way they’ve been showing up for the last three years.

They’ll continue to see Xander grow and get faster — a process Plotts said has already given him a soft spot for the child over the past two years. The runners see him as their “little superstar,” Mease said — his bright eyes and gap-toothed smile have endeared him to the group.

They’ll greet each other with smiles, hugs, and many loud “hellos.” They’ll warm up around the field together, gather around and clap as a volunteer with a bullhorn reads out the names of those who have completed 50 or 100 parkruns, or volunteered for 25. Michael McClellan, 82, recently hit 50 — he runs most of the course and walks the rest.

They will run, walk and jog the length of the course, and when they’ve finished, they’ll cheer on every person who comes after them.