In high-intensity display, No. 4 Maryland field hockey upsets No. 3 UConn, 2-0 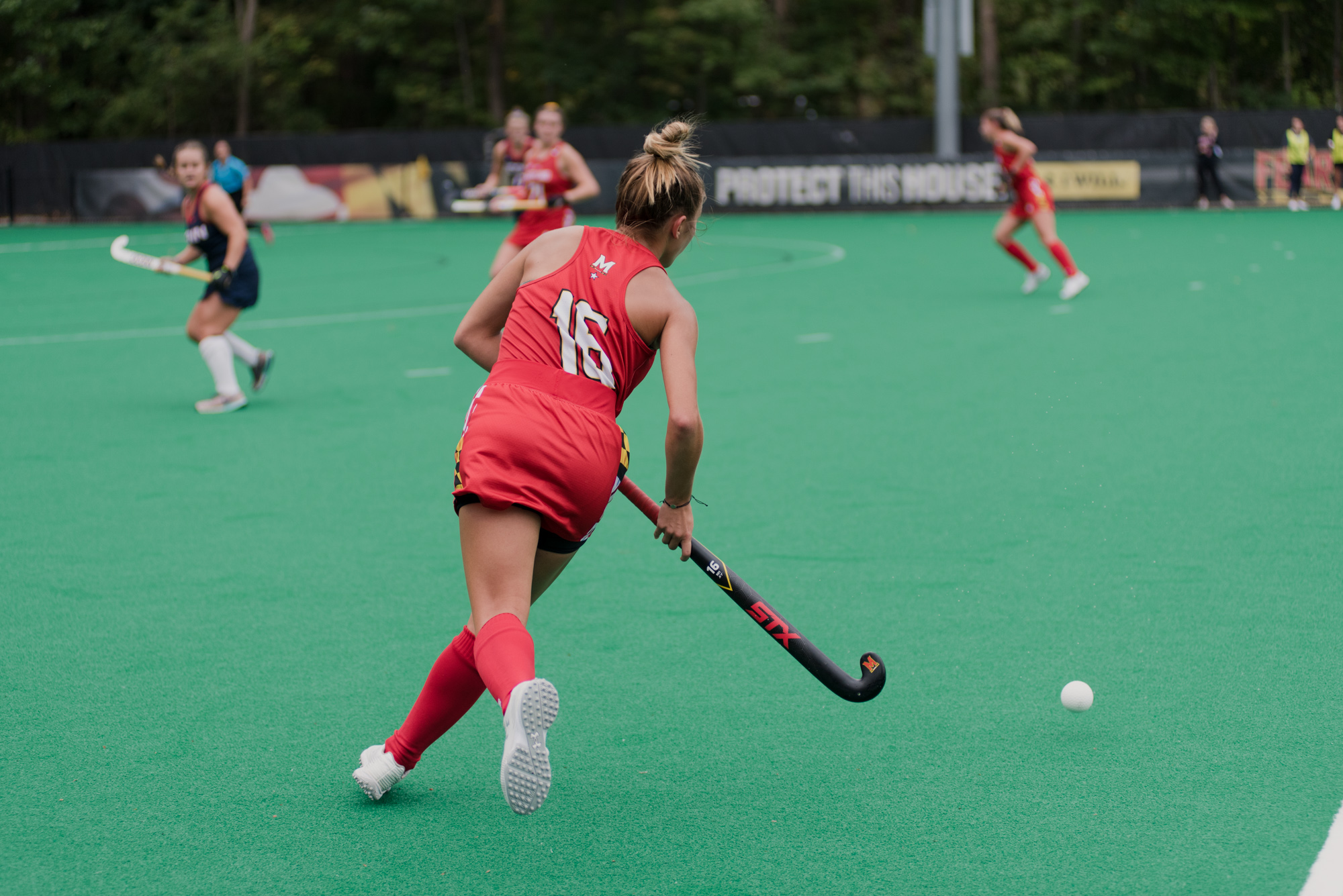 Midfielder Emma DeBerdine with the ball in Maryland field hockey's 2-0 win over No. 3 Connecticut on Oct. 6, 2019 at the Field Hockey & Lacrosse Complex. (Gabby Baniqued/The Diamondback)

Early in Maryland field hockey’s Sunday matchup against No. 3 Connecticut, midfielder Emma DeBerdine crept into her own half, hoping to poke the ball off an unsuspecting Huskies defender — just as she did when she scored the double-overtime game-winner against No. 5 Northwestern on Thursday.

After taking the ball away from UConn defender this time around, DeBerdine again darted the length of the pitch, deking her way beyond the defense before whipping a ball toward Cheyenne Sprecher’s cage.

And while the shot whistled just wide, DeBerdine’s work rate foreshadowed a high-intensity display from the No. 4 Terps, who claimed a controlled 2-0 victory over the Huskies.

“Super energy and pressure from young Emma DeBerdine,” Meharg said. “She was unbelievably ruthless in her pressure, and that type of pressure can get you back what you need, and that’s on the board.”

Over the course of the season, the Terps have relied on their possession-based tactics to overwhelm defenses. But on Sunday, Maryland was forced into a more pragmatic approach, with the Huskies taking control of the ball for large parts of the opening frame.

So, the Terps defended in numbers, getting players behind the ball and limiting the space for UConn attackers to use. Consequently, the Huskies failed to record a shot on goal.

Maryland’s attack was held quiet, though, with DeBerdine’s wide attempt representing its only shot in the first.

“I gotta be honest, I thought we were super slow in the first quarter,” Meharg said. “I think our ball speed was slow, our movement after we passed was slow, we were very hesitant.”

The game began to open up in the second quarter, though, with UConn applying early pressure on Noelle Frost’s cage. Forward Svea Boker forced the Terps into two saves within the first three minutes of the frame.

But just as it looked as if the Huskies were threatening to break the game open, the Terps drove the ball into the shooting circle, with midfielder Madison Maguire laying the ball to an unmarked Linda Cobano, who fired a first-time shot toward the bottom corner of the net. The ball tipped off Huskies defender Antonia Tiedtke and into the back of the cage, giving the Terps a surprising 1-0 lead.

Just 10 minutes later, defender Riley Donnelly doubled Maryland’s lead. DeBerdine beat her marker to the baseline before flashing a ball across the shooting circle and toward Donnelly. The sophomore settled herself and rifled the ball off Sprecher to ensure the Terps would head to halftime with a two-goal edge.

“Their goalie went down, and it was just a great opportunity to deflect up over [her],” Donnelly said. “It’s just really exciting, 1-0 versus 2-0 is a huge difference in field hockey.”

After Meharg’s squad struggled to translate its shot advantage to goals in Thursday’s matchup against Northwestern, it looked like the Terps had rediscovered their finishing quality, scoring two goals from their first four shots. So with its lead intact, Maryland looked to enjoy more possession and nullify a dangerous Huskies attack.

“You always have to expect that the other team is going to score in the second half, so that’s what we did,” Cobano said. “When we were in the circle right before the second half, we said, ‘Okay, it’s 0-0, we have to play like we’re not leading.’”

While the Terps weren’t able to add to their lead, they kept the ball away from UConn’s forwards and midfielders. Maryland’s midfield exerted more influence with DeBerdine and Maguire getting themselves involved in the build-up play. Meanwhile, sparsely-used midfielder Taylor Mason impressed in limited minutes, badgering the opposition midfield to break up the play.

This resulted in Maryland outshooting UConn 5-0 to maintain its two-goal lead.

“We really had to sustain possession for as [long] as possible,” Donnelly said, “and be smart with our opportunities. We want to attack and go forward as much as possible, but [we were] two goals up, so make smart passes.”

The Terps continued to probe in the fourth quarter, with Sprecher denying DeBerdine and Bibi Donraadt’s early efforts. Meanwhile, UConn began to get the ball in more dangerous areas, as Boker saw her shot go wide. The Huskies heightened intensity culminated with a penalty stroke, as Frost took Boker down inside the shooting circle.

Boker stepped up to the penalty spot, hoping to get a goal back and set the stage for a frenzied finish. At the whistle’s behest, she calmly laced a shot toward the bottom right corner of the cage.

But Frost was equal to it, stretching out to deny Boker, giving the Terps a clean sheet and their second straight victory over top-five competition.

“This is what we do it for,” Meharg said. “I’m super pleased with their resilience, their coachability, and my staff and training.”