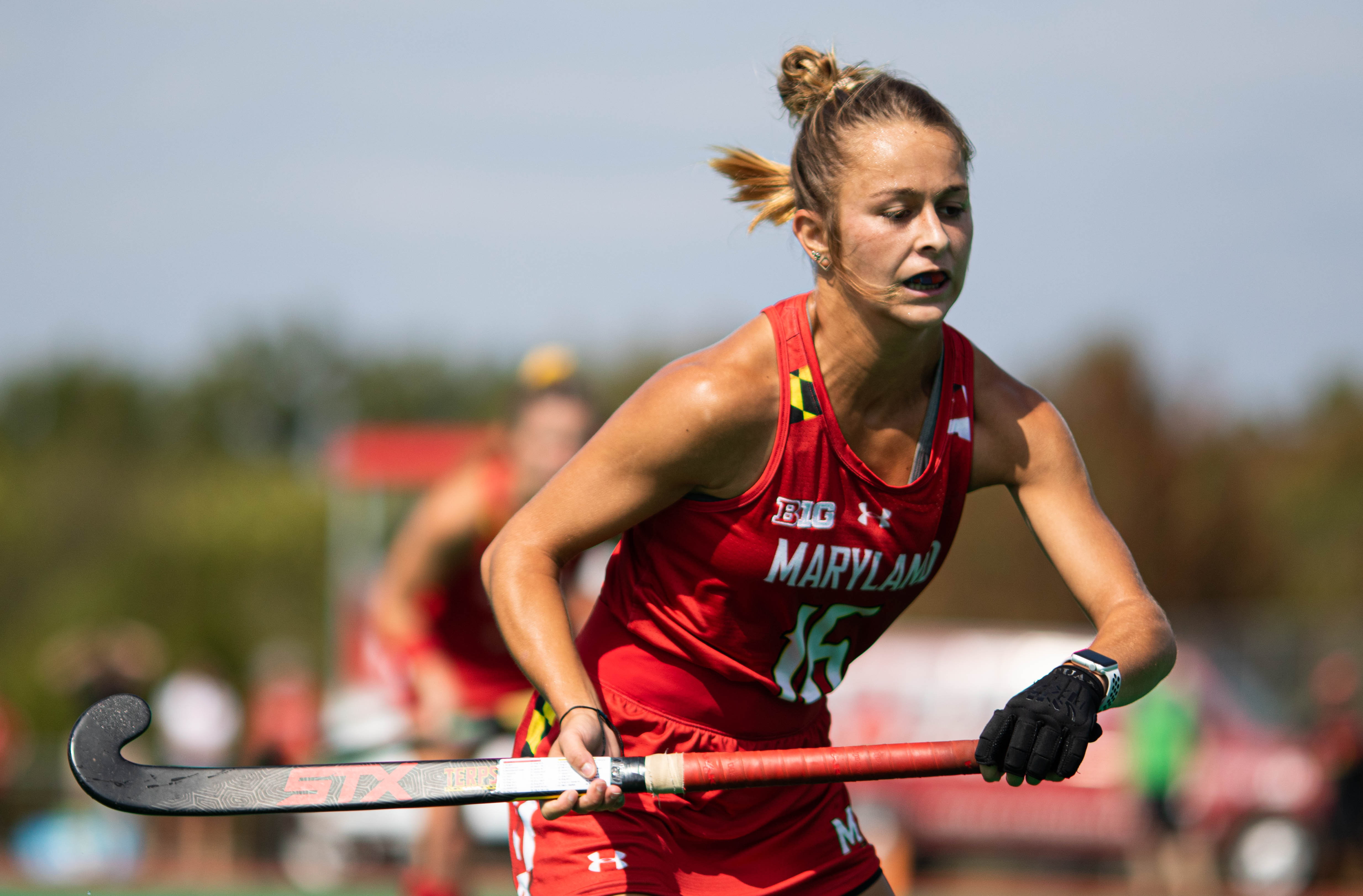 Going into Maryland field hockey’s clash with No. 5 Northwestern, coach Missy Meharg pushed the Terps to show off their finishing quality, especially after struggling to put up a convincing scoreline in their 2-1 victory over No. 18 Rutgers on Saturday.

But even as the Terps continued to rack up shots on the Wildcats’ frame, they couldn’t add to their 1-0 lead. So Meharg paced back and forth on the sideline as the Terps — despite an overwhelmingly dominant display — held a thin 1-0 lead late in the fourth quarter.

And when defender Kirsten Mansfield flicked the ball into the open net after it got through goalkeeper Noelle Frost’s pads, there was a sense of inevitability given Maryland’s inability to cap off an impressive showing with more goals.

But the Terps showed heart, continuing to probe Florien Marcussen’s cage in the two overtime periods. And eventually, this determination paid off, with midfielder Emma DeBerdine rifling the ball past Marcussen to lift the Terps to a dramatic 2-1 double-overtime victory on Thursday.

“The outcome is the right outcome for the quality of [our] play,” Meharg said. “It probably was the best connection we had line-to-line. … We couldn’t be more pleased.”

No. 4 Maryland returned to Evanston, Illinois, after playing there for the Big Ten/ACC Cup earlier in the year, this time to take on No. 5 Northwestern and its high-powered attack led by forward Bente Baekers — who entered into Thursday’s game with an NCAA-leading 16 goals.

With the Terps and Wildcats ranking No. 1 and No. 2 in scoring in the Big Ten, a goal-fest seemed likely. And this belief was seemingly confirmed five minutes into the game.

DeBerdine nicked the ball off of a Northwestern attacker before driving toward the shooting circle, eventually whipping a centering pass toward Marcussen’s net.

And while Northwestern’s shot-stopper batted the ball away, the rebound fell to midfielder Linda Cobano, who deftly shifted the ball over to Kelee Lepage. The defender then shimmied her way around a couple of Northwestern defenders before lifting the ball above Marcussen’s pad and into the back of the cage — her first goal of the season.

“She’s got a whole level of swag to her that’s super confident,” Meharg said. “She can play the game the entire time and she’s going to be able to give you that extra push into the circle.”

It was the Terps who looked more likely to score the next goal. Cobano, fresh off being named the Big Ten Offensive Player of the Week, continued to test Marcussen, forcing the Wildcats’ goalkeeper into two saves.

Maryland continued to assert its dominance in the second frame, outshooting Northwestern 7-0. But despite the overwhelming control, Meharg’s team was unable to add to its lead, with Marcussen — and the post — denying the Terps.

Defender Bodil Keus saw an early penalty-corner effort hit the woodwork, eventually falling to forward Bibi Donraadt, who struck the crossbar from just outside of the goalmouth.

Meanwhile, Marcussen would make an additional four saves in the second to keep the deficit at one.

“I think we hit a fair number of crossbars, I think their goalie was on fire,” Meharg said. “The reality is you always can take better shots.”

On the other side of the ball, Northwestern’s attack was impotent, failing to record a shot in the first half. The Terps kept the Wildcats pinned back due to their fluid attacking play, ensuring that the high-octane Northwestern attack was unable to push forward and create any real scoring chances.

“We were collective in our defense,” Meharg said, “and I think we were very strong in our back left corner.”

While the Wildcats eventually recorded their first shot in the third quarter — a Baekers effort that was easily dealt with by Frost — Maryland remained on top, firing four shots in the frame. But Meharg’s squad couldn’t find that elusive second goal, with Cobano and Donraadt seeing their strokes go wide of the mark.

The fourth quarter proved to be a far tighter affair, with neither team recording a shot until the two-minute mark. Forward/midfielder Lakin Barry fired a speculative strike toward Frost off a penalty corner. The ball squirted through Frost’s pads and into the path of Mansfield, who flicked the ball into the empty net to knot the game up at one and send the game into overtime.

“We always say that 7v7 is our time,” LePage said. “We’ve been in these situations before and we know that if we play together we’re going to be fine.”

Maryland continued to create scoring opportunities in the first extra period, but Northwestern’s defense limited the quality of their chances, keeping the Terps’ attackers on the outside. The Wildcats, on the other hand, looked rejuvenated after their late equalizer. While they were unable to create a bevy of chances for themselves, they were active around Frost’s goalmouth, forcing the Maryland goalkeeper to come out to take care of dangerous passes.

But neither side could find the back of the cage, sending the game into a second overtime period. Five minutes later, DeBerdine did just as she did in the first quarter, poking the ball off midfielder/defender Alia Marshall before rifling it into the bottom-left corner of the cage to secure the Terps’ third overtime victory over a top-10 team.

“She hit it to a tee technically,” Meharg said. “Her vision was up, she saw the goalie commit, [and] she put it where she needed to put it.”