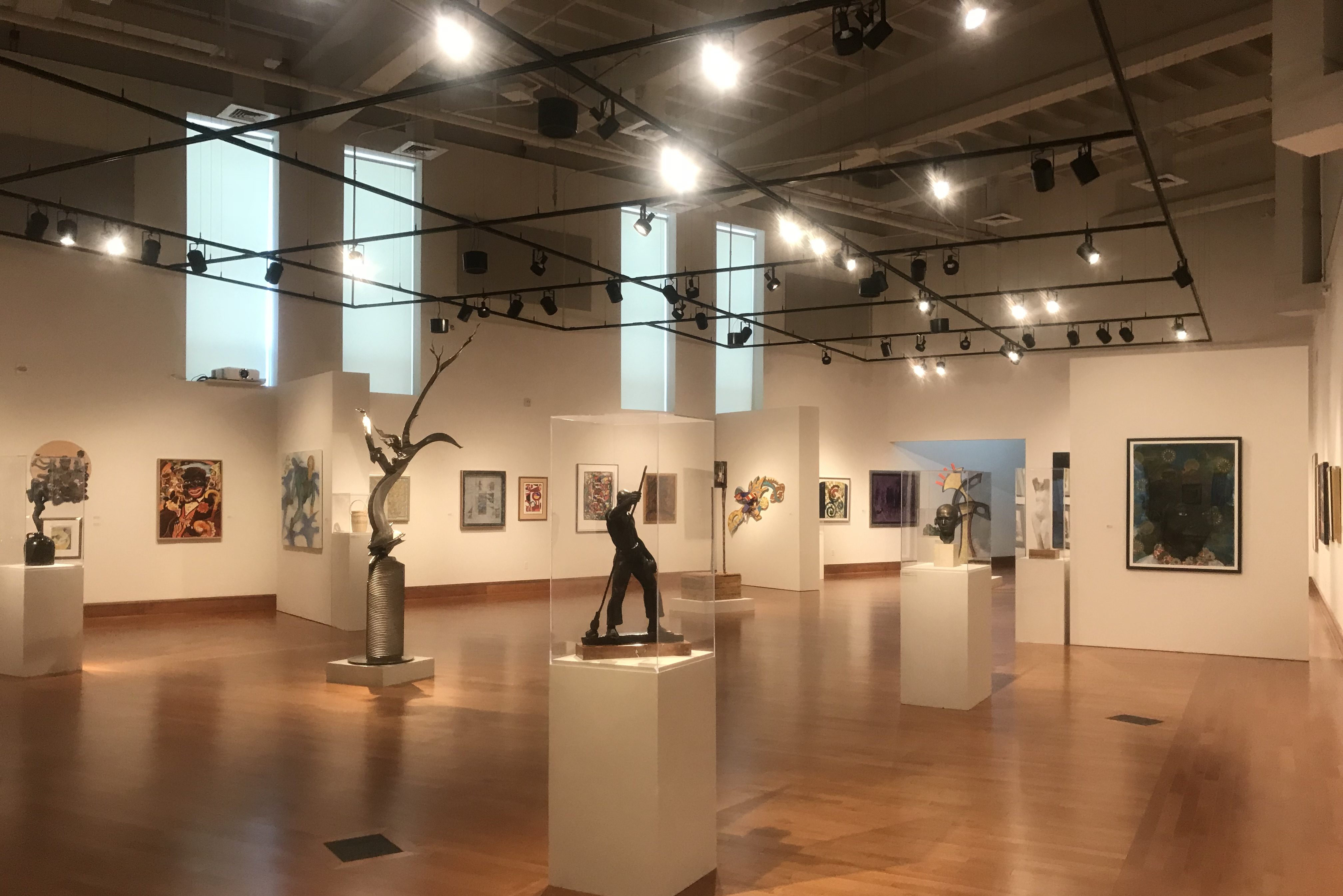 ‘[Un]Common Collections’ will be on display at the David C. Driskell Center through Nov. 22, 2019 (Morgan Pravato/For The Diamondback).

The David C. Driskell Center is an absolute necessity on campus. Yet, its contributions are frequently overlooked as a result of its secluded home in Cole Student Activities Building.

“Honestly, a lot of people don’t even know this place exists,” said Maggie Kimbis, a freshman biology major who began working at the Driskell Center this semester.

The center uniquely focuses on the cultural significance of African American art. Its latest exhibition, “[Un]Common Collections: Selections from Fifteen Collectors,” displays, as the name suggests, works selected from 15 esteemed collectors of the genre. Unlike previous exhibitions, this one is intended to showcase the importance of those collectors rather than focus on the artists.

The exhibition includes informational brochures that allow viewers to understand the intention behind “[Un]Common Collections.” But without them, collectors can easily go unrecognized. Visually, they are only acknowledged on small plaques beside each work, beneath the piece’s title and creator.

But “[Un]Common Collections” is still a strong visual exhibition that shares the African American cultural experience. Some pieces portray the lighter moments of everyday life, like running around the playground and listening to music. Others depict more intense moments of struggle and racism.

The 64 pieces share many commonalities, despite coming from different artists and collectors. The selections beautifully complement each other, both artistically and thematically.

Many works combine vivid color and patterns with bold black and white lines. In multiple instances, the lines are used to separate human figures from their surroundings by emphasizing the contrast.

Romare Bearden’s Louisiana Serenade is a standout. The musicians’ bodies morph into their jazz instruments, becoming a group of beautifully colored shapes that resemble humans. Their identities are intertwined with their music and song.

Most human beings portrayed in these works share the same statuesque positioning and serious facial expressions, regardless of medium. This is impactful, but the works that defy this norm are some of the strongest in the exhibition.

After seeing similar figures, viewers turn the corner to stare at Rose Piper’s Don’t Explain One More Time, one of the exhibition’s most emotionally compelling pieces. The man’s mouth gapes open as he makes a great exclamation, probably some form of a scream. His upper body is tensely contracted over his eerily engaged fingers. Upon simple observation, it is unclear whether the figure is in a state of pain, irritation or both.

This strong image is placed next to Beauford Delaney’s Portrait #16, a lightly colored piece portraying a content, half-smiling man. The position of Piper’s work only makes it appear more satisfying, yet disturbing.

Another memorable work, Stefanie Jackson’s What’s Going On: Mercy, Mercy Me is one of the most politically charged in the space. She powerfully paints a somber mood with heavy grays that mostly overshadow the small spots of color.

Chaos appears to occupy every inch of the space. An army tank rolls through the street as a fire lights up the background. The people who occupy this world are clearly affected by it: A woman near the center crouches with her hands outstretched as she prays or begs. A man in the background also places his exaggeratedly large hands into the air — another charged gesture.

However, the most unsettling detail of What’s Going On is a small African American girl. She stands with a mask over the top half of her face, attempting to cover her features with its porcelain skin and red hair tied with two pink bows. Her clothing also matches the bows, as she appears to be trying to hide all the real parts of herself to no avail.

So, while the girl is attempting to warp her identity, the Driskell Center tries to embrace it. “[Un]Common Collections” successfully amplifies the power of African American artists and acknowledges the collectors.

The center continues to “open the minds of students” by introducing them to different cultures and ideas, according to Kimbis.

“It can really change your life,” she said.