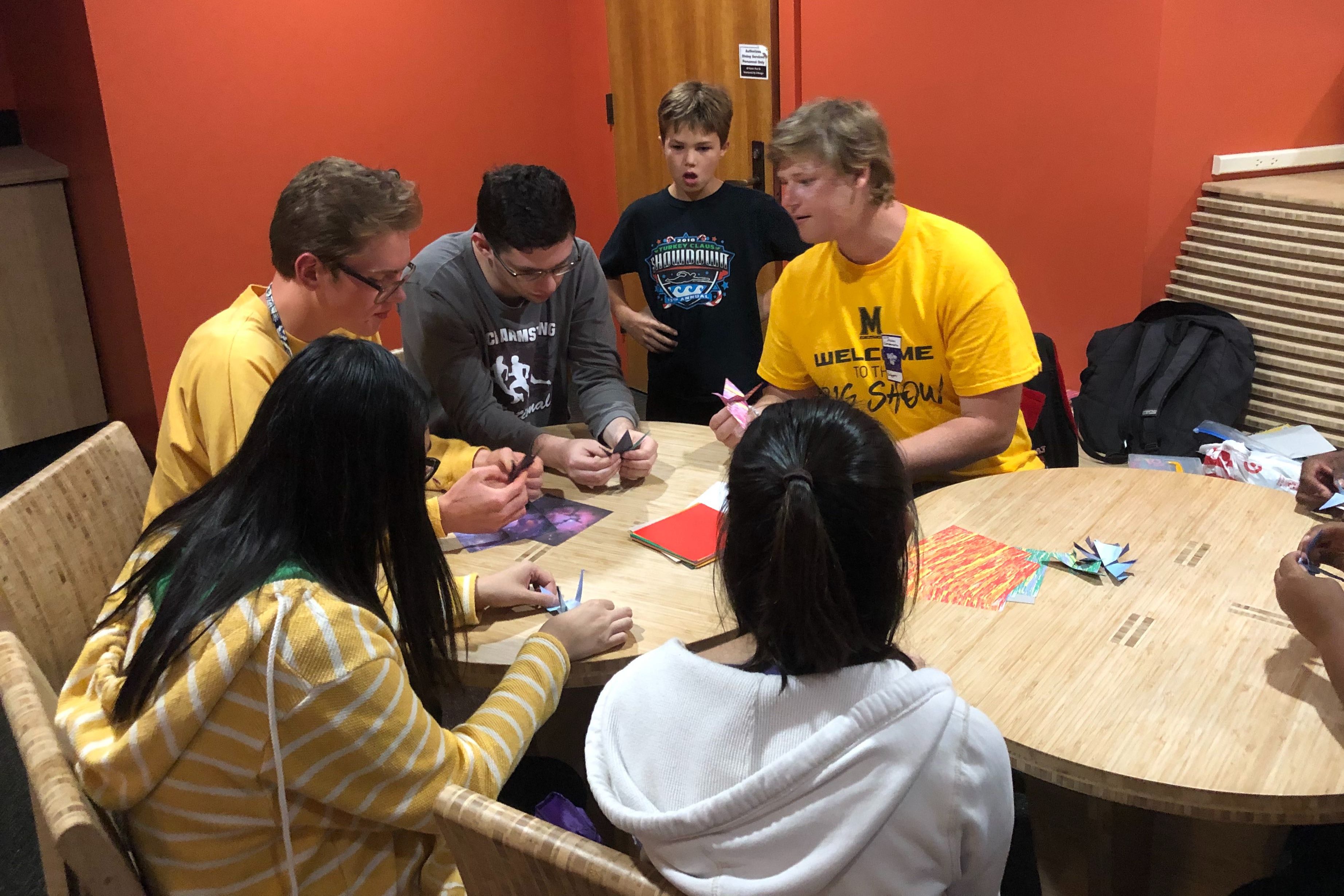 Red paper, blue paper, striped paper and … space paper? Papers of all colors and galaxies are strewn across two circular tables haphazardly pushed together at The Clarice Smith Performing Art Center’s NextNOW Fest on Friday. Junior astronomy and physics major Jason Campanella is sitting at the head of the table with a confident smile on his face, wearing a bright yellow shirt that reads, “Welcome to the B1G show.”

This is the Origami Club workshop, and Campanella — the club’s president — is teaching attendees how to fold butterflies and cranes. People come in droves, some students and some younger children with their parents. They all arrive with a sense of shyness, some already prefacing with, “Oh I’ve never done this before, I’m no good at origami.”

Time wears on, and fold after fold, Campanella guides his students-for-the-night, until they have a finished product. He pauses and takes the time to explain the more complex folds — the “kite fold” and the “petal fold” — with the ease of an experienced teacher.

“I really enjoy teaching,” said Campanella. “I like being able to work through things because it really gets me thinking about what it is that I’m doing and how I can better describe it … Working with people who maybe haven’t done this before and saying ‘No, trust me, you can do this’ … That’s really fun.”

In the corner sits mechanical engineering doctoral student, Nick Chiu, assembling what he describes as a “giant spiky ball.” Chiu is constructing a “Kusudama,” which in Japanese means “medicine ball.” He said it took him four days prior to the event — and 90 sheets of paper — to fold all the triangular pieces he needed to build the structure.

Chiu said his mother taught him how to fold hats and boats when he was 5 years old, and he’s been folding ever since.

“Back when I was in undergrad, I would fold things during class just to stay awake more so, you know, I was bored,” said Chiu, a member of the club.

He continued: “I think it’s a way to kind of get away from people, from screens, from like, all the distractions. Just going to focus on something that’s very simple with a single sheet of paper, or multiple sheets of paper that you take from what people think is just kind of trash to something that can be art.”

After sitting at the table with Campanella for 20 minutes, Erika Maher, a freshman aerospace engineering major, and her friend Bayley Lindsay, a freshman enrolled in letters and sciences, finished making two paper cranes. After being asked what their favorite part of the experience was, they laughed. Maher said, “Being successful,” as Lindsay simultaneously said, “The end-product. [Actually] having a paper crane.”

Another group shuffled in, sat down and got to folding right away. This is how it was the whole evening, group after group, fold after fold. This particular group stayed behind at the table — even after Campanella was done teaching them the crane and the butterfly — to borrow one of his books and try a new fold. Each of them attempted folding an origami rocket, in tandem with the space theme.

Campanella thinks this workshop is the perfect fit for an event like NextNOW, since it allows people to immediately leave with something they have created — no glue-drying necessary.

“It’s really easy to let people leave with their own stuff and look at it and think ‘I made that,’” said Campanella. “And, you know, maybe they’ll like it and join the club. But even if they don’t, I want them to have made something that they’re proud of.”

At the end of the night, Chiu gathers his half-finished Kusudama and playfully places it on Campanella’s head. He said he would finish gluing the rest of it together at home to keep the ball from falling to pieces.

Campanella has one more student left, as a few volunteers from NextNOW walk by. “Here’s Tyler!” one of them says.

Campanella has challenged himself to make one crane a day, for 1,000 days. Today’s the 256th crane and it goes to Tyler — for being in touch with him and helping him organize the workshop.

And this is what it seems origami is for: to share with others, to create with others and to bring people together.