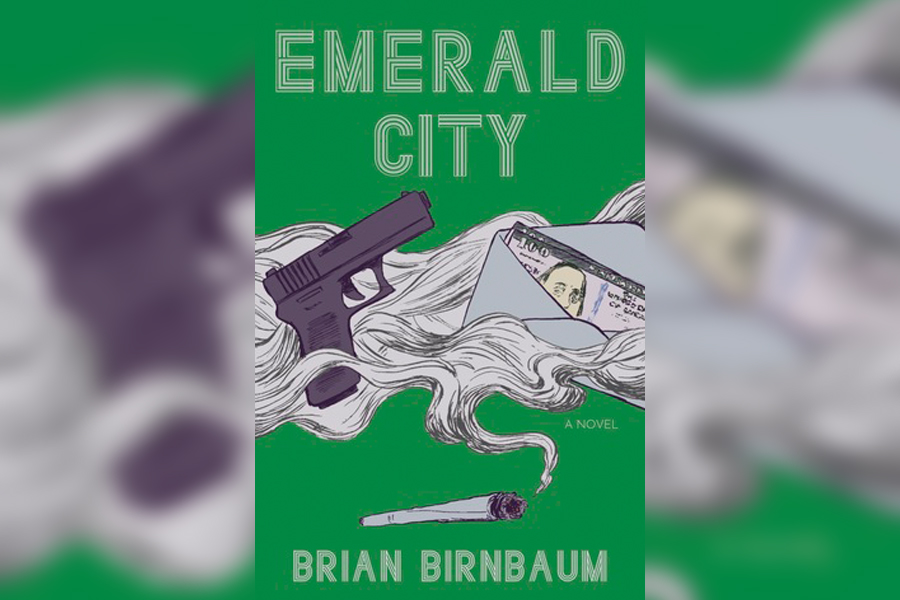 What makes a great novel? In my younger years, I enjoyed novels that took me to places far away: The Chronicles of Narnia, the Harry Potter series, The Twilight Saga, The Lord of the Rings. And while I still love a fantasy novel here and there, with age I have begun to crave more realistic reads.

A great novel tells a story that slowly reveals meaningful themes, forcing you to reflect on your own reality. Emerald City, written by University of Maryland alumnus Brian Birnbaum, does exactly that.

Birnbaum’s novel follows Benison Behrenreich, whose father is the CEO of a deaf access agency. Both of Benison’s parents are deaf, as are the author’s parents. Benison’s father is not a standup guy — not only was he arrested for illegally obtaining government subsidies for the deaf, but he also bribed Myriadal College officials so that Benison could play on its basketball team.

At the beginning of the novel, a host of characters are introduced. Julia Paolantonio, after losing her dad to a drug overdose, goes to live with her criminal grandfather Johnny Raciti before she starts at Myriadal. Peter Fosch, a stellar drug runner, becomes wrapped up with Raciti, and the ring of organized crime becomes a part of Benison’s story as well. My favorite stories are ones that slowly weave together multiple narratives, and reading Emerald City almost felt like completing a puzzle.

One of the best aspects of the novel was the character development. The story travels between the past and future, so it’s important to note the time frame before diving into each chapter. And flashing back to the past of each character deepened the plotline. What happened in the past, in their childhood, to make them who they are today? The author said he structured the novel this way so readers could dig under the surface of each narrative.

“While we do live linearly, it’s not really like that in our minds. We are constantly reverting to memories and drawing on those and it affects who we are now,” Birnbaum said.

Birnbaum graduated from this university in 2010 with a degree in psychology. After college, he lived in Seattle for two years, and he always wanted to write a book set in the city. The title, Emerald City, is a reference to both Seattle and The Wizard of Oz, as well as the idea that we’re all chasing the idea of something that’s not really there, Birnbaum said.

The characters in the novel are flawed and dark and sometimes not very likable. But as a college-aged kid, I found that intriguing. Birnbaum said he drew from his flaws and his past to sculpt the characters into realistic young adults. A student-athlete growing up, Birnbaum had performance anxiety, similar to Benison’s insecurities in basketball. Peter’s character manifested from the author’s own past struggles with alcohol and drugs. The rawness of each character in the book is incredible.

How an author chooses to end a novel really exposes the meaning of a story and the author’s motive behind it. But Emerald City did not have the ending I was craving. The characters went through so much struggle and hardship that while reading I thought, “Please Birnbaum. Please give them a happy ending.” The ending wasn’t cruel, and I won’t give it away, but it definitely left me pondering.

“I just think that’s what life is. Even when we do reach a point of resolution in life, there’s always another thing that opens up a rift of uncertainty and ambiguity and ambivalence,” Birnbaum said. “If things are really bow-tied at the end I get bothered.”

Issues and stereotypes of the deaf community are weaved throughout the book. Birnbaum did a good job of treating characters who are deaf the same way he treated hearing characters. He reveals a lot of facts about people who are deaf that are stigmatized. He purposely didn’t over-sympathize with them, Birnbaum said. They’re just as flawed as the other characters.

Small details gave the book a subtle Maryland influence. Benison’s basketball coach was named Gary Williams, after the former Maryland basketball coach who led the team to an NCAA title in 2002. Coincidentally, the book mentions a “trio of terps,” terp being an industry term for a sign language interpreter.

If you’re looking for an intriguing read about crime, corruption and struggling college-aged kids, give Emerald City a read. It’s important to support fellow Terps and facilitating more discussion about the deaf community is a major bonus.