After a $2.2 million government grant, electric buses will soon come to PG County 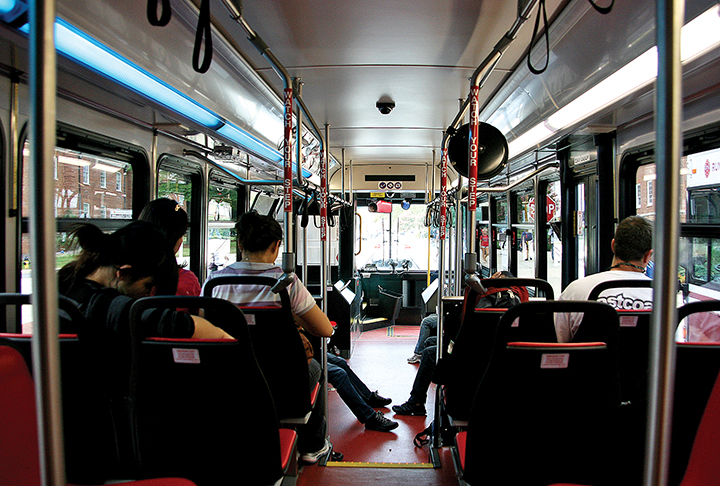 The inside of a DOTS Shuttle-UM bus. (Charlie DeBoyace/The Diamondback)

Battery-powered skateboards, scooters and bicycles are popping up all across College Park — and in just a few years, electric buses will be too.

After receiving a $2.2 million dollar grant from the U.S. Department of Transportation’s Low or No Emission Bus Program, Prince George’s County will receive four electric buses, said Paulette Jones, public information officer for Public Works and Transportation for the county.

They are expected to hit Prince George’s County streets by summer 2021.

In addition to the District of Columbia, the government initiative launched in 37 other states, with one project per state. In 2017, Maryland was one of 39 states that received a grant from the Department of Transportation.

The four buses will be added to the fleet of 95 buses in the county, and they will rotate through different routes, Jones said. The plug-in chargers will be implemented at the bus terminals in Forestville.

The new buses are built by Proterra, a California-based company. They’re 35-foot Catalyst models that can seat 29 people, accelerate from 0-20 miles per hour in five seconds and have a 234-mile maximum range, according to the Proterra website.

That doesn’t mean they’re without their challenges. Something that’s “less of an issue,” but that could happen, would be that charging a large number of buses at the same time could prompt a power surge, said Lei Zhang, the Maryland Transportation Institute director.

“If all the big buses go to the same place and recharge their batteries at around the same time, that’s going to cause a major power fluctuation,” Zhang said.

It’s also important to consider the life cycle associated with the buses, Zhang said, though adding electric buses to existing bus fleets is something “we should applaud.”

Alicea Sims, a freshman enrolled in letters and sciences, said that although she’s not much of a bus rider, she is excited about the environmental benefits.

“You know, they get to be environmentally friendly and there’s a lot less exhaust in the system,” Sims said. “I think it’ll be cool.”

Zhang said he’s “very positive” about the buses coming to the area.

“I think it’s really a good undertaking by the county,” he said.