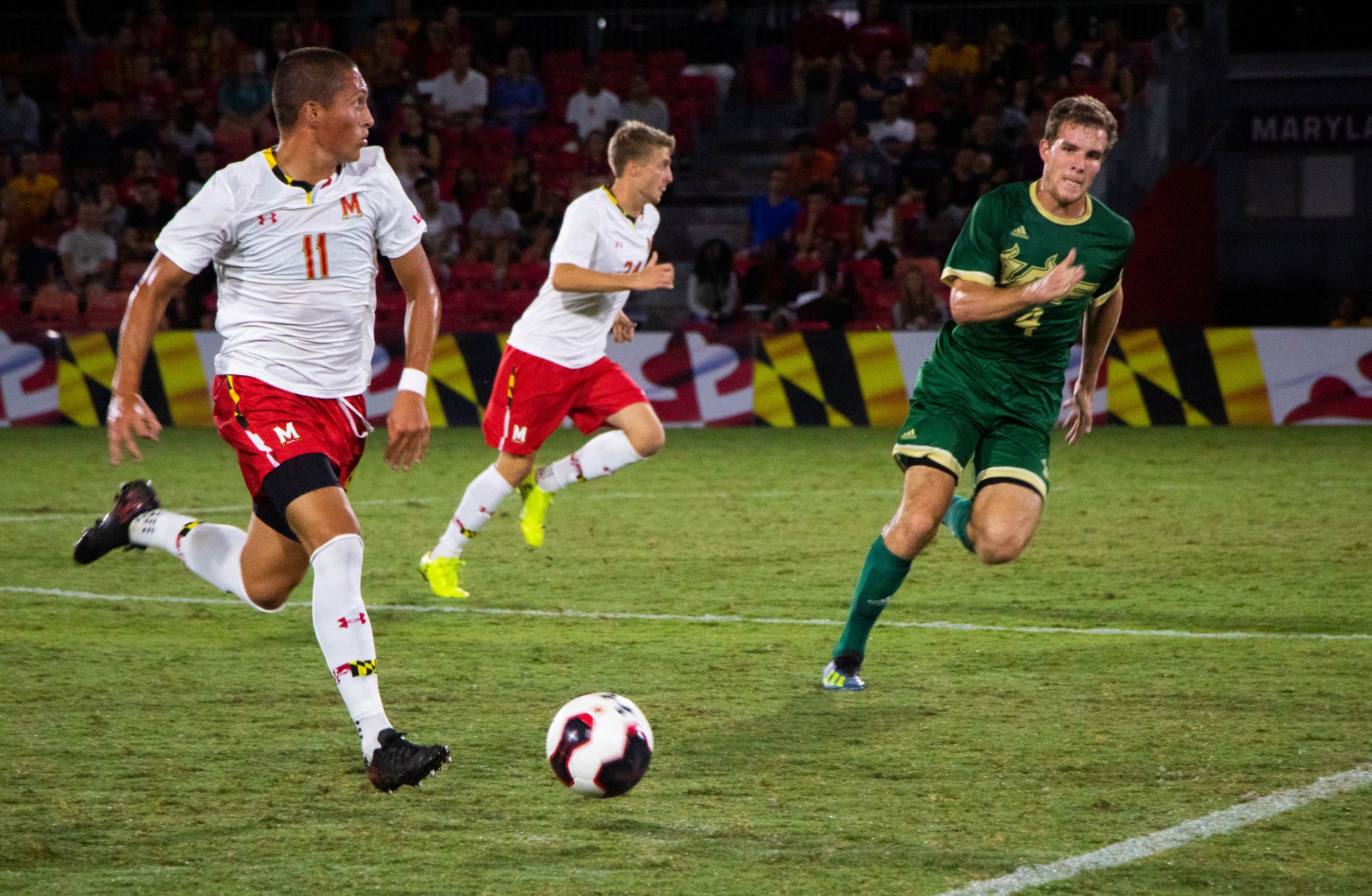 By the end of Maryland men’s soccer’s Thursday late afternoon training to prepare for its conference opener against Northwestern on Friday, only a few players remained on the practice field.

Wingers Justin Harris and Malcolm Johnston stuck around — but not to get extra practice in. Rather, they collected stray balls littered around the field. The upperclassmen had filed out, and the younger players were left to fulfill the obligations that come with being a first-year player.

But both Harris and Johnston have carved out more meaningful roles when match day arrives, earning starting jobs as forwards on the left and right wings, respectively, while other attacking players recover from injuries.

“If a player, I feel, is ready to contribute and there’s a need there, I don’t care what their background or resume says,” coach Sasho Cirovski said. “I think we’ve got some really terrific young players who came here to contribute, and they already are.”

[Read more: Maryland men’s soccer grinded its way to a win over Villanova on short rest]

Since the preseason, injuries to offensive-minded players Paul Bin, Luke Brown and William James Herve have forced Cirovski to shift players around and insert younger weapons into the starting lineup.

The 26th-year coach said that when he’s looking for players who can make an impact on the field, he doesn’t use age as a discerning factor. Instead, he hones in on the players who exhibit qualities he values during games.

“I’ve learned to know what [Cirovski] wants from me. The main thing, I think, is just working hard, and giving it your all,” Johnston said. “Even if bounces aren’t going your way, just put your head down, forget it and keep working hard. And I think I’ve done that well.”

Cirovski lauded both Harris and Johnston for the confidence and maturity that each has displayed as their roles have increased this season.

Johnston exhibited his finesse on the field with his decision-making on Monday night against Villanova. In the 74th minute, he received a pass in the box and searched for an opening. Johnston noticed the defender leveraging his positioning to take away his right foot. Instead of forcing an ill-advised shot, he calmly passed out to a teammate at the edge of the box.

That decision proved to be a fruitful one, with midfielder David Kovacic dishing off to defender Ben Di Rosa for the game-winning goal.

During that 1-0 win over the Wildcats, Brown returned to the pitch after missing two weeks of time because of an injury he suffered against Virginia. Herve is slated to return in the near future; Cirovski anticipates him to be available for Friday’s match, barring any unexpected setbacks.

But even as those experienced players return, they know that the freshmen have earned their roles within the team.

“They’ve earned their spots, so we’re going to have to earn our spots back,” Brown said. “But it’s great to have so many options going forward. Especially with the pace of the game, having four, five, six, seven good forwards is always going to help.”

When Cirovski does have a full complement of attackers to rotate in and out, Harris and Johnston both feel that they can continue to embody Cirovski’s style, which requires the attacking players to dedicate just as much energy to relentless pressing as they do when seeking out scoring opportunities.

As the season progresses, both forwards know that this unexpected early workload will benefit them in the future. The minutes have allowed them to get into a rhythm on the field and raise their confidence during their jump in competition at the college level.

But no matter how impactful their play is on the team, Harris and Johnston will remain humbled with their ball-collecting duties, which carry on throughout the remainder of the season.

“We all get our own assigned jobs. I’m on balls, it’s not the worst job,” Johnston said. “Some people have water and have to carry the huge water jugs.”