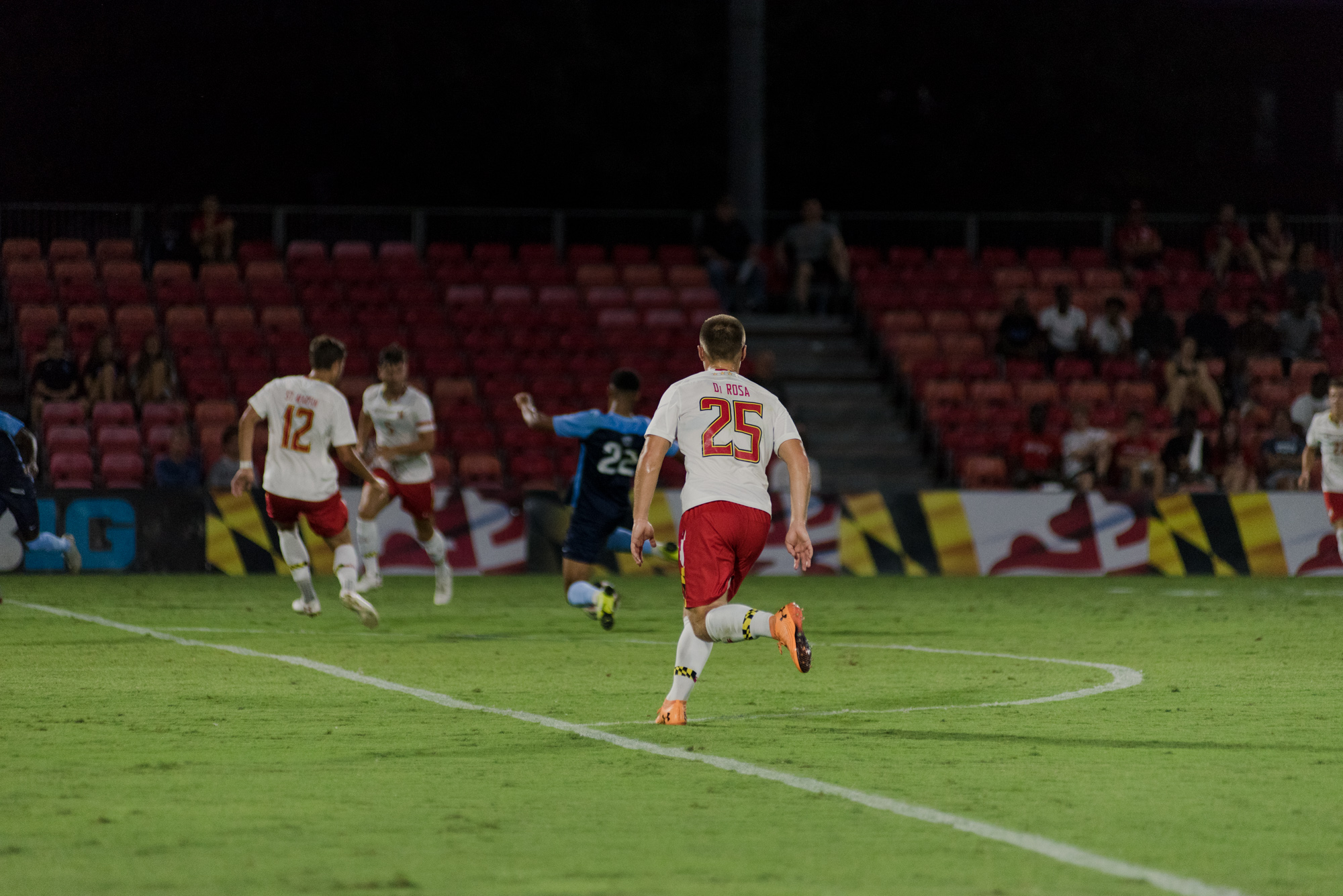 Maryland men’s soccer midfielder Malcolm Johnston searched for an opportunity from well inside the box but instead calmly passed out to midfielder David Kovacic just outside of the 18-yard area.

Kovacic patiently waited for a chance to unfold, then noticed defender Ben Di Rosa alone on the right edge of the box. Di Rosa received Kovacic’s pass and stepped into a shot that flew past Carson Williams and into the top-right corner of the net.

Di Rosa’s strike represented the long-awaited breakthrough against Villanova’s confounding defense that entered the match having allowed the fewest goals in the country and was enough for Maryland to earn a 1-0 win at Ludwig Field on Monday night.

Ahead of the game, coach Sasho Cirovski dubbed freshman goalkeeper Niklas Neumann the starter for the second straight game, marking the first time either he or Russell Shealy had started consecutively during the ongoing goalkeeper competition.

But his stint behind the Terps’ backline on Monday night didn’t last long. As Neumann skied to punch a pass out of a congested box about four minutes in, he knocked heads with Wildcat forward Lyam MacKinnon, and came out of the game with a sizable gash to his face that required stitches.

Shealy entered and was greeted with an uneventful first half between the sticks. Most of the action the redshirt freshman netminder was subjected to was retrieving passes from his own teammates and redistributing out.

Those recurring backward passes, though, drew the ire of Cirovski, who repeatedly yelled out instructions to play the ball forward.

“In the first half we sort of almost over-possessed the ball in not dangerous places,” Cirovski said. “We definitely wanted to get a little bit more overload with our outside backs getting forward and getting in behind their backs.”

When his squad did press forward on the attack, it encountered a Villanova defense prepared to take away what Maryland is known for. As the Wildcats continuously foiled the Terps’ attacks, they quickly cleared the ball up the field to preempt Maryland from initiating its hounding press to create extra scoring chances.

“They came out with a very good game plan. In the first half, they were playing very direct,” midfielder Nick Richardson said. “Maybe one or two passes, and then they cleared it up the field. So I think that gave us a little bit of a struggle in the first half with our press.”

To start the second half, the attack began to probe deeper in Villanova’s defense. And it was nearly rewarded as midfielder Luca Mellor’s foul inside the box gave the Terps a penalty shot.

It was defender Johannes Bergmann lining up at the spot for Maryland, looking to replace Amar Sejdic in that role after he went 1-for-2 on penalties in 2018. Williams dove to his left to knock Bergmann’s left-footed attempt toward the sidelines and out of danger.

The Terps, however, did not relent with itheir attack and remained patient for the next chance to develop.

“As the game went on, [Villanova] slowed down a little bit,” Richardson said. “And that big wall wasn’t there anymore.”

In the 50th minute, when Johnston received the pass in a prime position in the box, the freshman didn’t force things against the Wildcats then-vulnerable defense, instead opting to work the ball all the way around to set up the game-winning score.

The difference behind the paltry first half and the more dynamic second half that led to the score was exactly what Cirovski alluded to. Di Rosa, a left back, played all the way forward to the box and converted his shot to give the Terps (3-2) their third 1-0 victory in as many tries at home this season.

“Second half, I thought we raised our quality,” Cirovski said. “And I thought we also started going forward a little bit more with some urgency. And I think you saw a lot of chances being created off of that.”