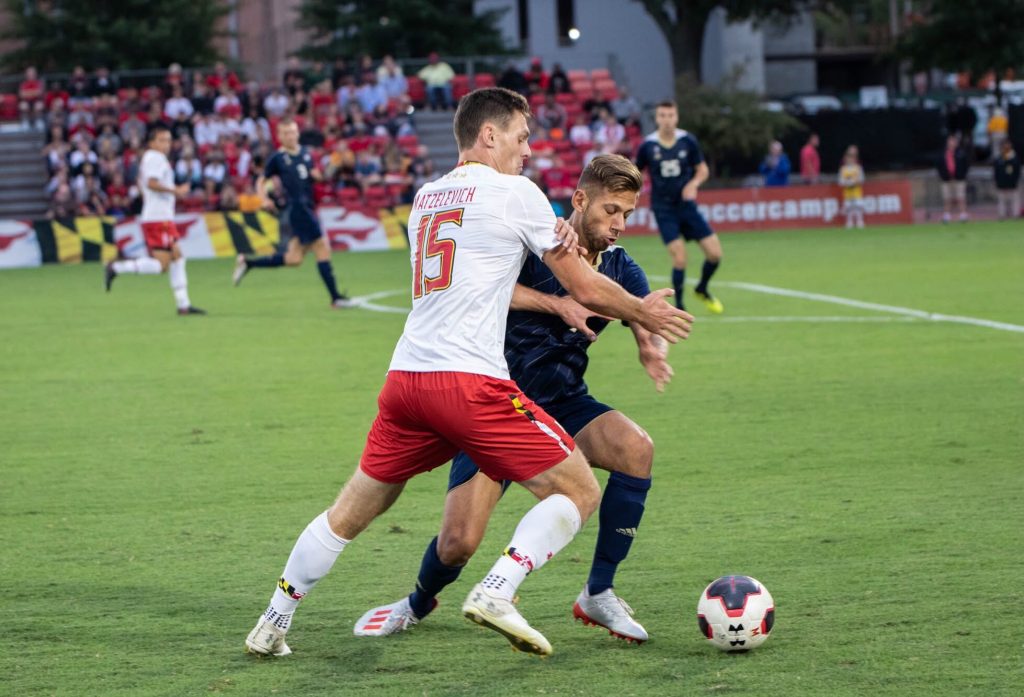 Forward Eric Matzelevich and an Akron player fight for the ball in Maryland men's soccer's 1-0 win over the Zips on Sept. 13, 2019 at Ludwig Field. (Richard Moglen/The Diamondback)

In the 17th minute, Maryland men’s soccer midfielder Nick Richardson quickly reacted when Akron midfielder Skye Harter received a pass as the Zips attempted to escape their defensive half.

Richardson harassed Harter, poking the ball from his possession. The redshirt freshman then took control, gathering the ball for the Terps before it bounced to forward Eric Matzelevich, who promptly buried it for the lone goal in Maryland’s 1-0 victory.

During the week of preparation leading up to the rematch of the 2018 national championship, pressing was the decided emphasis for the Terps. And Richardson’s effort in the goal-scoring sequence epitomized the assertive approach that coach Sasho Cirovski has his team to impose on its opposition.

“We’re known for our counter-pressing [and] our ability to win the ball and create chances,” Cirovski said.

The Terps entered the tilt with Akron having lost two consecutive games where the defensive intensity fell short of Cirovski’s standards. Without the pressure, he watched from the sidelines as his team surrendered five goals over the course of two matches.

Following a 3-2 loss to UCLA, Maryland had six full days to prepare for its match with the Zips. Rather than spending their time extensively scouting the opposition, the Terps focused on improving their pressing style.

Maryland’s preparation translated to its play on Ludwig Field. Akron was consistently subjected to pressure in its defensive half, and Cirovski’s squad threatened to capitalize on multiple chances created from turnovers.

“Our front four was pressing really well,” defender Ben Di Rosa said. “Our front guys helped out our backline a ton the entire game. … I think from back to front, our pressing was a big change from last week.”

Freshmen wingers Justin Harris and Malcolm Johnston flanked Matzelevich in the final third, and sophomore forward Brayan Padilla rounded out the front four that played much of the game together.

Despite its inexperience, Cirovski also lauded his group’s ability to make things difficult for the Zips in their own half of the field.

Farther back in the formation, Richardson has impressed as a defensive midfielder because of his pestering nature in the middle of the field.

Many will look at the Terps’ lone score of the night and remember Matzelevich’s decisive strike that fit right under the bar. But it was Richardson’s effort that materialized the chance. And Matzelevich certainly doesn’t take that fact for granted.

“[He] breaks things up. Just does his thing and wins it back for us,” Matzelevich said. “It’s an often underlooked thing in soccer, but it’s huge for a team.”

Both Di Rosa and Matzelevich compared the redshirt freshman to Andrew Samuels, the holding midfielder who was a key cog of last year’s formidable defense.

“He’s a beast back there. He’s our motor … just buzzing all around the midfield, making tackles, making plays, intercepting balls,” Di Rosa said. “He breaks up plays better than many guys I know.”

Maryland has won both of its games at Ludwig Field this season by a score of 1-0, and pressing has played a leading role in the defense earning clean sheets in both matches. As the team continues its long homestand against Villanova on Monday night, Cirovski and company will be seeking the same energy in the press to create more chances.

“In front of our home crowd, we always want to keep a clean sheet. That’s always our priority,” Di Rosa said. “Five goals in the first three games was way too many as a backline, and we knew that.”