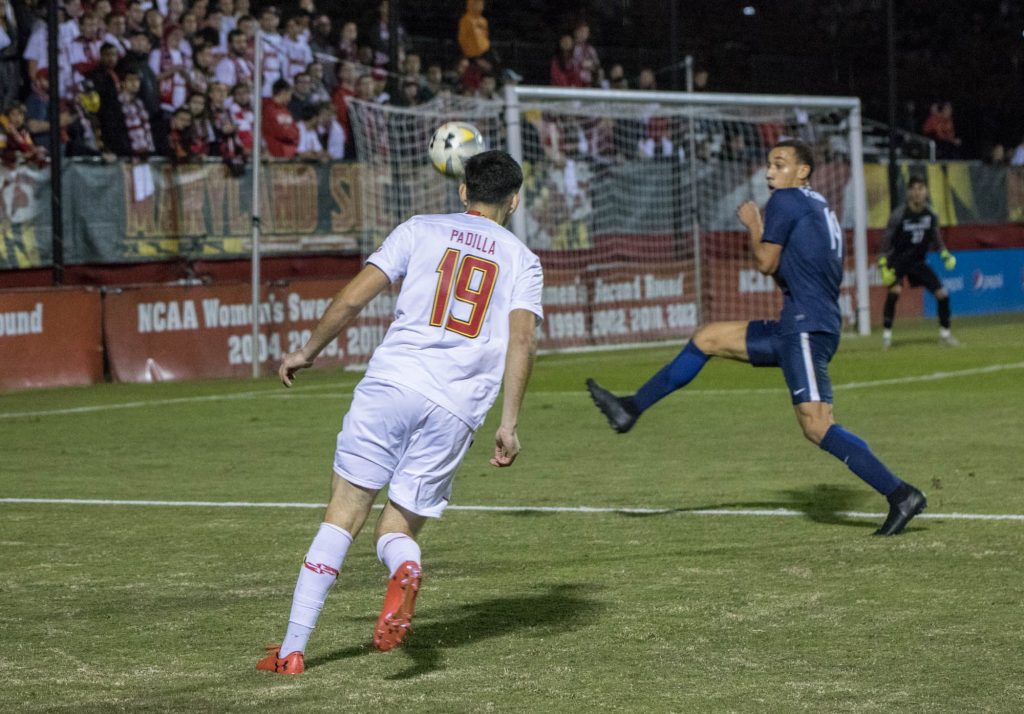 Forward Brayan Padilla puts in a cross with the outside of his foot during Maryland’s 3-2 overtime win over Penn State at Ludwig Field on Oct. 23, 2018. (Richard Moglen/The Diamondback)

When Talen Energy Stadium representatives contacted Villanova men’s soccer to inform them of a scheduling conflict — which would suddenly make the Major League Soccer venue unavailable for the scheduled match against Maryland — a contingency plan was quickly set into motion.

Villanova’s solution was to move the 2019 meeting to Ludwig Field in College Park on Sept. 16, and hope to revisit plans of a matchup between the two sides at the MLS stadium in the future.

The scheduling snafu afforded the Terps another home game on its slate, and gave them a four-game homestand that starts Friday night against Akron. The series of games at Ludwig Field comes at a time when the team needs to find its footing and dig out from a 1-2 start to the year.

“Playing in front of The Crew is by far the biggest confidence builder we can have,” forward Justin Gielen said. “So playing in front of them for four straight games, I think we’ll be pretty good after this stretch.”

Through three games on the young season, Maryland has played in a variety of environments — a home game, a neutral game of two regionally located rivals and an away game on the opposite coast.

A return to Ludwig Field for four matches over 11 days marks a return to the scene of a display that was reflective of coach Sasho Cirovski’s ideal style of relentless attacking in all phases of the game. That performance against USF yielded the team’s lone win to date, and the squad hopes the homestand can serve as extra motivation to deliver again for the fans.

“It’s more prideful,” Gielen said. “You want to win for your crowd, rather than win in front of your crowd.”

The first matchup comes against Akron, the team Maryland defeated to claim its fourth national championship in its history.

Ahead of the season, college soccer pundits highlighted this game as a marquee early-season matchup, given that it was a national title rematch between the preseason No. 1 Terps and the No. 3 Zips.

But those rankings have shifted drastically. Cirovski’s squad staggered to a 1-2 start that dropped it to No. 24 in the rankings. Meanwhile, Akron has gone 0-3 and has fallen entirely out of the top-25 United Soccer Coaches’ poll.

Despite the luster lost in this matchup of last season’s College Cup finalists, Cirovski still believes both teams are coming off great performances. He said the Zips, who have lost two one-score matches, are much better than their record indicates.

His Terps team is coming off a road performance against UCLA where the attack netted two goals, which he believes should have been enough to garner a draw at the minimum. But despite the loss, the team feels it’s getting back to the brand of soccer its head coach demands.

“Our offense looks really good, our pressing looks good,” forward Brayan Padilla said. “We look more compact from these past few games, and we are prepared for this next match.”

Following the match against Akron, Maryland will play eight of its next 10 games in College Park, another string of games that was aided by a second scheduling change.

The match against Georgetown on Oct. 14 was originally scheduled to be played in Washington D.C., with the Hoyas as the host. But when Fox Sports 1 approached the teams about a nighttime matchup, the game had to be moved because Shaw Field doesn’t have stadium lights to support night games.

With those two extra home games — Villanova and Georgetown — the Terps will end the season having played 11 of their 17 games in front of its rowdy supporters.

While Maryland now has a decided home tilt to the schedule, Cirovski knows the hospitable conditions don’t always mean positive results without proper execution on the field.

“The one thing I do know is,” Cirovski said, “whether you’re home or away, the games are won inside the lines, and not just by the fact that you’re at home.”