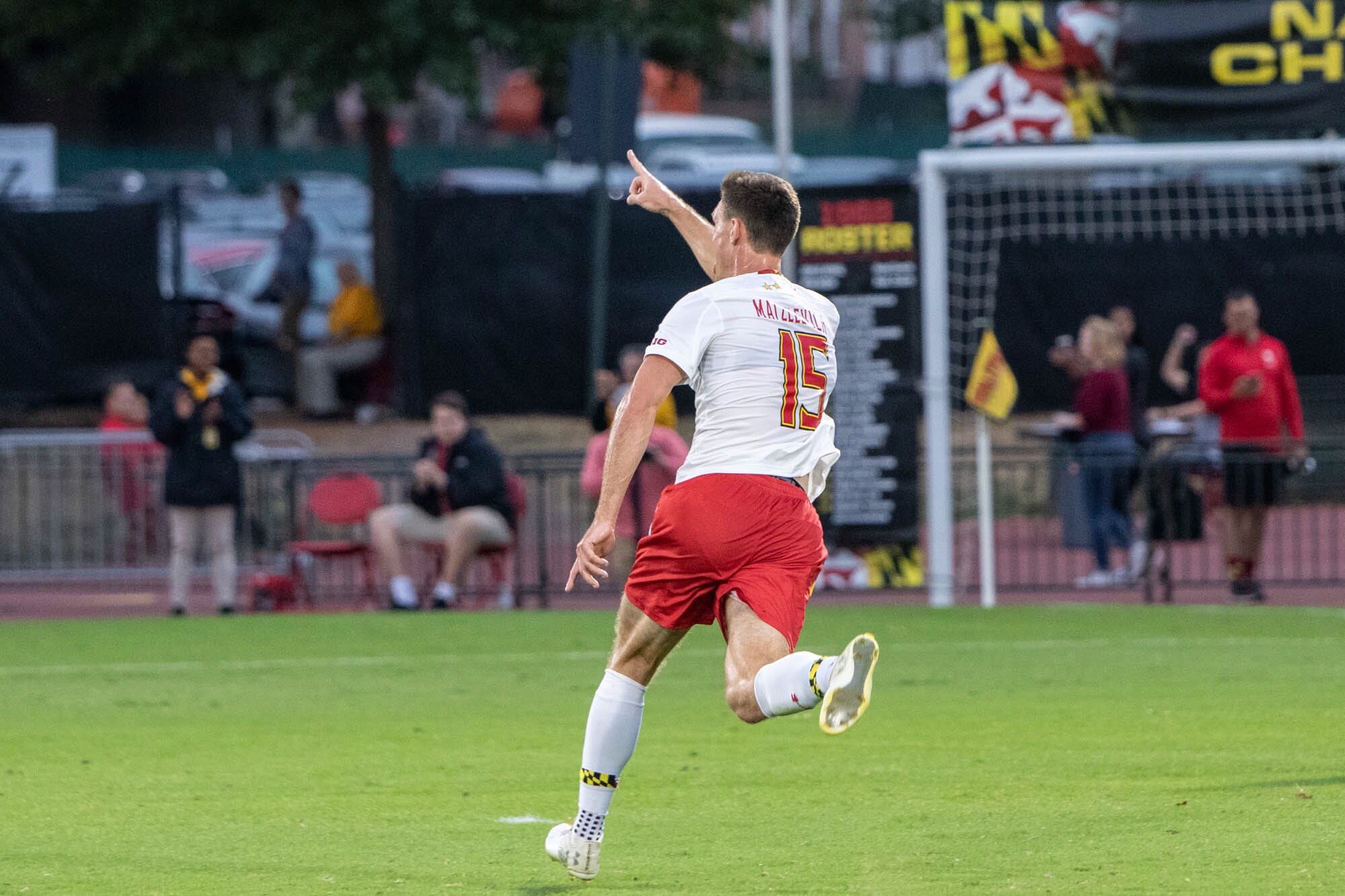 During the offseason, local players for Maryland men’s soccer such as forward Eric Matzelvich and defenders Ben and Matt Di Rosa opted to stay in College Park to train for the upcoming season instead of play for summer league teams. During those summer sessions, Ben Di Rosa watched as Matzelevich repeatedly stepped into powerful shots from distance.

So after Matzelevich slid to the Ludwig Field turf and gave an emphatic salute from his knees to punctuate his scorching shot Friday night, Ben Di Rosa approached him and said, “that reminds me of the practice fields.”

This time, though, the goal counted and etched a marker on the scoreboard. That talley 17 minutes into the match proved to be all the No. 24 Terps needed to secure a 1-0 win, saluting the Zips on their way back to Akron, Ohio.

“You wish for those opportunities,” Matzelevich said. “And obviously [I] hit it well, and fortunate that it went in the goal.”

During the week of training, the Terps’ coaches emphasized the need to get back to a relentless press and pressure the opposition.

Late in the 17th minute, center midfielder Nick Richardson obliged, and the result was the opportunity coach Sasho Cirovski and company know can be produced from that style.

The redshirt freshman hounded Akron midfielder Skye Harter in the Zips’ defensive half before assuming possession and pushing forward. After Richardson tried to cut inside, defender Daniel Strachan jarred the ball loose and tried to clear.

The buildup that Cirovski described continued on from Richardson with midfielder Malcolm Johnston foiling Strachan’s escape tactic. His attempted clearance deflected off Johnston’s leg and fell right to Matzelevich for the driven strike.

Forward Brayan Padilla, coming off his first career goal in the prior game, had the look of an invigorated attacker searching for his next tally.

The sophomore drove a left-footed free kick from well outside the box that forced Tor Saunders to extend for a diving stop to keep Maryland from widening its advantage. Just over two minutes later, Padilla received a pass at the corner of the 18-yard box and attempted a chip that sailed just over the crossbar and on top of the net.

“Brayan is a rhythm player, and he’s a player that I think he’s gaining confidence every week in training,” Cirovski said. “He’s a goal scorer. He’s a guy that’s a gifted attacking player.”

Though Padilla didn’t connect, his near-misses accounted for two of the Terps’ three most-threatening chances in the first 45 minutes. Meanwhile, on the other end, Akron was held to just one on-target shot — a weakly hit header that fell right into the waiting arms of freshman goalkeeper Niklas Neumann.

“In the first half, we did a really good job. We came out on the front foot,” Di Rosa said. “From back to front, our pressing was a big change from last week.”

In the second half, though, the Zips exploited holes in transition and began breaking down the Maryland defense with their pace.

Four minutes after halftime, Akron forward Diogo Pacheco was sprung in transition with a pass at midfield. Pacheco continued all the way to just inside the box, where he fired a shot that ricocheted off the woodwork to keep the Zips off the scoreboard.

Pacheco was handed another chance in the 66th minute, as a careless pass from centerback Johannes Bergmann was intercepted and brought forward quickly. Fortunately for Bergmann, fellow centerback Brett St. Martin sprinted back to get in position and keep Neumann out of harm’s way.

“I thought tonight, we made things difficult for Akron,” Cirovski said. “And then, when they got into a rhythm late, I thought we held strong. And that’s the kind of effort that I expected from this team.”

With the defense not relenting for over 72 minutes, Maryland ensured that Matzelevich’s goal would stand up as the game-winning score would be the difference in the 2018 national championship rematch, which coincidentally ended in the same score.

“It required a championship effort,” Cirovski said. “And I think, tonight, we got it.”

CORRECTION: Due to a reporting error, a previous version of this story called Nick Richardson a sophomore. He is a redshirt freshman. This story has been updated.