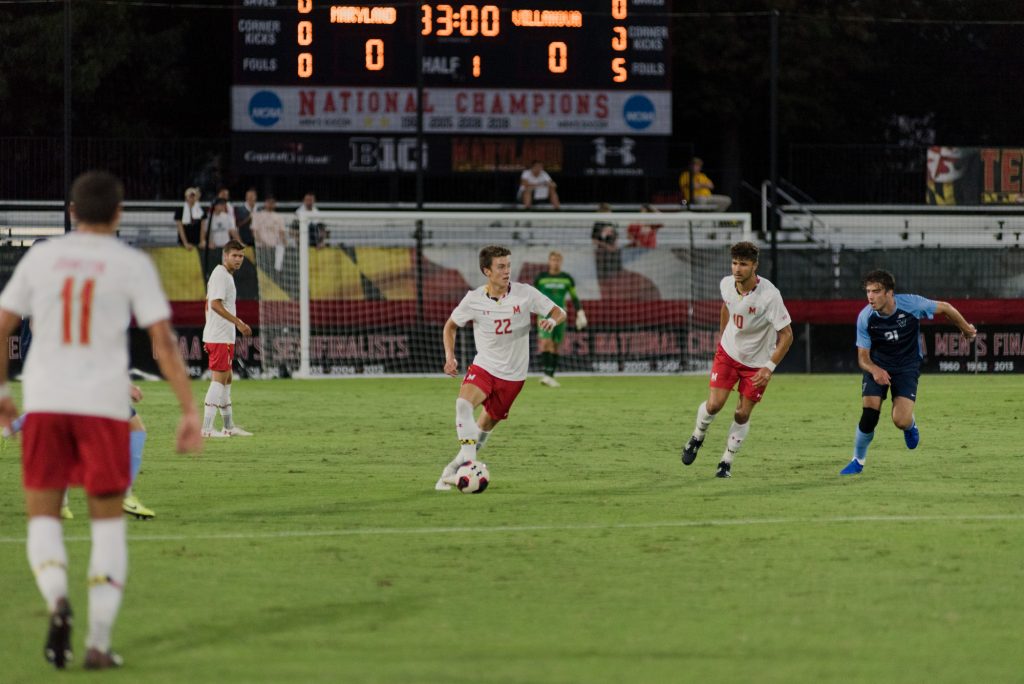 During the first half of Monday night’s 1-0 win over Villanova, Maryland men’s soccer coach Sasho Cirovski grew tired of seeing his team’s possessions end without any meaningful attacks.

The Terps’ sluggish play was evident after only a two-day recovery period following last Friday’s match against Akron. The result was over-possessing the ball, without threatening to press forward.

“Play the ball forward,” Cirovski yelled from the sidelines on more than one occasion.

But following the 15-minute halftime break, Maryland came out with renewed energy, threatening the Wildcats with an onslaught of chances and finding the tally that propelled it to its third win of the season.

“It’s tough to come out with a lot of energy when you’re having a long day, it’s a long weekend [and] you don’t really have much recovery time,” midfielder Nick Richardson said. “We had to bring all of our willpower together … that’s all we really needed.”

The Friday-to-Monday turnaround is commonplace on college soccer slates around the country with the current schedule makeup. Maryland has four Monday matchups like this on its slate this season, requiring the coaches to balance recovery and preparation in short order.

Following the Terps’ win over Akron, defender Ben Di Rosa said the team had a light recovery session Saturday before going through the typical preparation it would the day before a game on Sunday.

Villanova also played a Friday night game — a 1-0 loss to Penn State — and found little success generating quality scoring opportunities on Monday. In the first half, the Terps sent two shots on goal, while the Wildcats didn’t test goalkeeper Russell Shealy with any on-target looks.

“In the first half, we didn’t come out as sharp as we wanted to. It’s kind of tough to have a quick turnaround, Friday to Monday, but we knew there’s no excuses,” Di Rosa said. “They played a Friday game too, and I think we just weren’t as sharp.”

Di Rosa said that at halftime, Cirovski referenced their intense summer training sessions and alluded to those as preparation for games that require his team to dig deeper while they’re not running on full energy.

Against Akron, Cirovski’s team expended a lot of energy with its press to force turnovers and create chances. The press requires players to chase passes and quickly engage opponents, resulting in high-usage rates for the Terps last Friday night in high temperatures.

“These are always tough times for my team in early September when it’s really hot, because we are a pressing team,” Cirovski said. “Tactically, I should maybe sit back and conserve some energy, but that’s not who Maryland soccer is, or who I am.”

As he’s done for the past six years, Cirovski continues to push legislation to implement a two-semester model in the college soccer season. The proposed model would allow teams to play the same number of games, but matches would be spread out over the fall and spring semesters, with a winter break in between.

That model — which Cirovski said he feels the sport will move toward in time — would reduce the number of short-recovery games, which he believes hurts the game’s ability to showcase college soccer to the nation.

“You barely have enough time to recover physically [and] emotionally,” Cirovski said. “And then to try to go out and play a game where you want to showcase the sport, you want to have a good experience. It’s very difficult.”

In the meantime, the 26th-year coach knows that his team will need to navigate these parts of the schedule to come away with gritty wins like the 1-0 result over Villanova.

“That’s what we have. We have to grind, we have to fight, we have to scratch, we have to grow. And our teams always do that,” Cirovski said. “So while we’re fighting for something better, we’re going to be really good in the system we’re in now.”