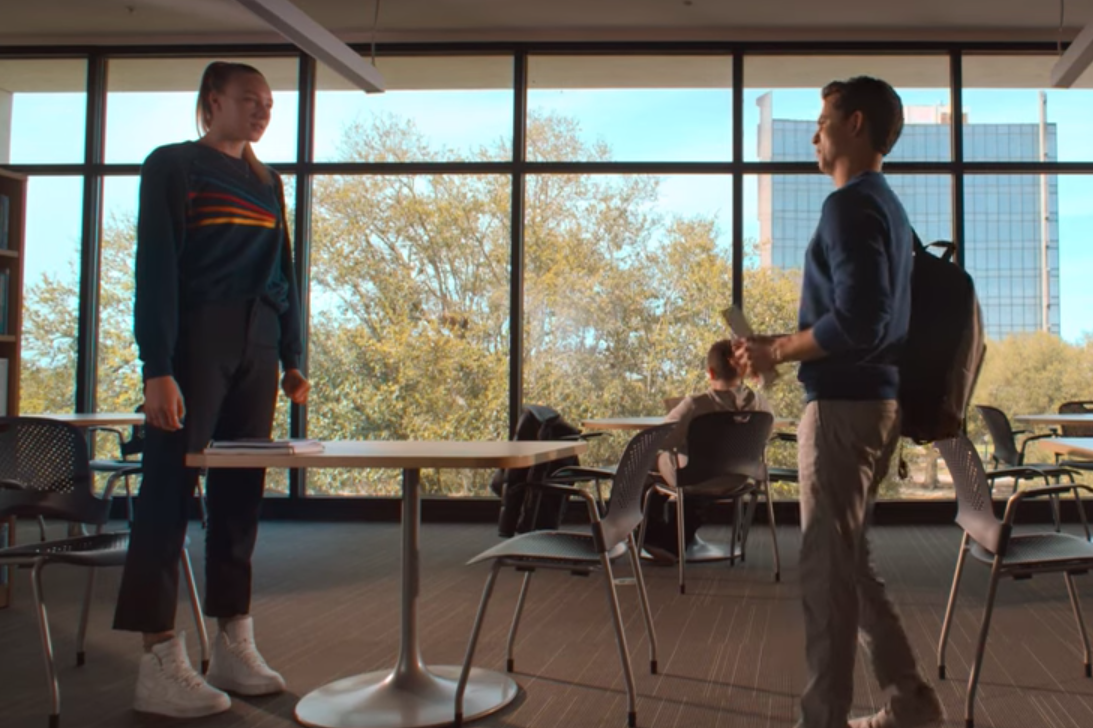 The new Netflix movie 'Tall Girl' shows how tall girls walk through the halls of high school (Photo via YouTube).

Netflix’s Tall Girl is the first movie that this 5-foot-11 woman has ever seen consciously feature a woman character over 5-foot-6. As soon as I saw the trailer, I knew I needed to watch it, especially to honor my 2012 insecure, preteen self. In a world where princesses are always shorter than their princes and girls are pressured to occupy less space, characters like Jodi, a 6-foot-1 teenage girl, are necessary.

Jodi finds herself struggling with her first love and insecurities, which are festered daily by bullies at her high school. Tall Girl successfully shows the dramatics of a teenager’s mind, as Jodi makes her height seem like the biggest problem to ever grace the streets of New Orleans, her hometown. In reality, there are obviously bigger issues in this world than this well-off girl’s height.

When Jodi asks viewers, “You think your life is hard?” it’s hard not to cringe. She lives in a gorgeous home with wealthy parents. While she cannot fit into cheaper children’s clothing like many petite girls can, she can clearly afford her size 13 men’s Nikes.

Obviously, many people struggle every day with far worse than physical insecurities. However, viewers are doing themselves a disservice if they take Jodi’s whiny exaggerations too seriously. Tall Girl is another addition to Netflix’s mind-numbing teenage romance collection — if you’re in search of something more depressing to remind you of actual problems in the world, I’d recommend scrolling over to the documentaries section.

That being said, Tall Girl’s dramatics at times make the movie borderline ridiculous. It portrays high school bullies as loud and disruptive, cracking corny jokes that make the whole class laugh at the victim. In reality, certain high schoolers might beat others down over appearances, but it is rarely in the intense manner that Netflix tries to make so commonplace.

To continue with the dramatics, one of the first full shots viewers see of Jodi is from a ridiculously warped angle. 6-foot-1 is not really that tall, but she looks jolly-green-giant-esque as the camera pans when she stands for the first time.

[Read more: Review: ‘Evelyn’ is a first-person look into a family’s grief]

So while Tall Girl is full of misses, it genuinely does show the life of a tall teenage girl accurately. Being tall absolutely becomes “your thing.” While most of the “insults” thrown at Jodi are really harmless — like “how’s the weather up there?” — Jodi’s reactions are absolutely genuine. My 16-year-old self also googled height reduction surgery with serious consideration … many times. While reactions like these may seem absurd, they align with the dramatic world of an insecure teenager. They are enough to make any viewer look back on their teenage years and laugh at what may have felt soul-crushing at the time.

One of the most important, yet disappointing, details of Tall Girl is how Jodi gains her confidence. She begins to realize that she can change the fact that her height is the first thing people notice about her. She begins to dress in a way that flatters her body — but not because of self-love. Instead, it’s for a boy’s attention. She does ultimately reject her love interest in favor of the friend who was by her side all along, another expected cliche.

So while Tall Girl is relatable for me, it becomes a failure if viewers see it as anything deeper than another cheesy coming-of-age story. Still, though, uplifting teenage movies will always have their place, and I do wish that Tall Girl existed years ago. That makes a lot of the missteps almost forgivable for people who shared Jodi’s experience.

Netflix makes the unfortunate mistake of highlighting Jodi’s subpar love story instead of focusing on the power of confidence in the face of insecurity. Ultimately, unless you are a fellow tall girl, you will probably never watch this again. It will become just another outcome of Netflix’s desperate effort to pump out as much original content in as little time as possible.