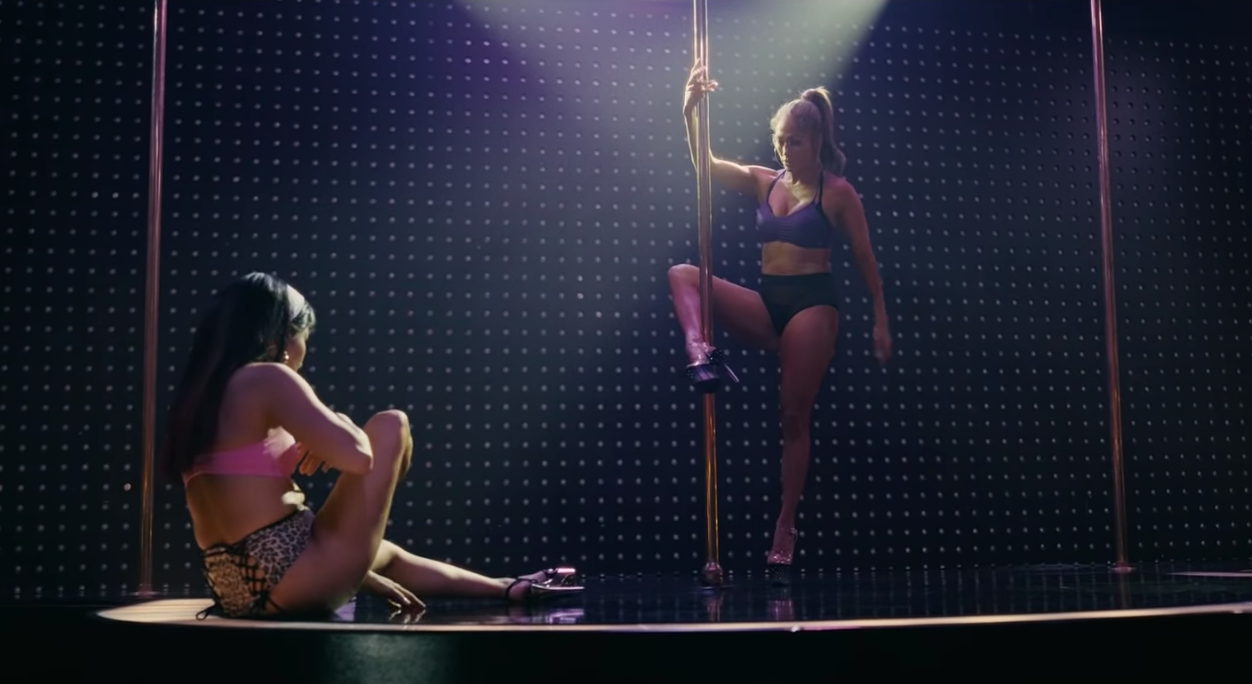 Jennifer Lopez and Constance Wu in 'Hustlers' (Photo via YouTube.)

Over the past few years, the sex industry has slowly become more normalized. People have increasingly rejected the notion of it being shameful, so much so that pole-dancing has become a trendy workout. Still, the stigma remains ingrained in the majority of our society. Lorene Scafaria’s newest film, Hustlers, adds to the discussion by reminding viewers of the struggles strippers often face while working and by challenging them with an ethical dilemma.

The film is inspired by Jessica Pressler’s story “The Hustlers at Scores,” originally published in 2015 in New York magazine. Veteran stripper Ramona (Jennifer Lopez) is the mastermind behind scamming Wall Street men out of thousands of dollars. She is accompanied by her “right-hand woman” Destiny (Constance Wu) and two former dancers, Mercedes (Keke Palmer) and Annabelle (Lili Reinhart). Together, the group takes advantage of wealthy men by drugging them to the border of coherency and pushing their credit cards to the limit.

Scafaria uses a series of flashbacks to tell this story. Destiny speaks to Elizabeth, a journalist inspired by Pressler, throughout the film. The audience watches her memories unfold and her emotions flare as the film switches from the past to the present.

Such a star-studded cast can raise expectations. Also featuring Lizzo and Cardi B, Hustlers had the potential to be another failure like Valentine’s Day or New Year’s Eve. Luckily though, Hustlers — and its cast that actually performs well — manages to be an exception to that pattern.

Lopez absolutely steals the spotlight, despite Wu’s more emotionally compelling performance. Ramona is commanding both sexually and mentally, with a sly confidence. She has profited handsomely from her work, as she lives in a beautiful apartment with designer everything.

Ultimately though, viewers get to see her as a mother who just wants to provide for her daughter. She comments repeatedly about the insane lengths that mothers will go to in order to protect their children, and her plot certainly proves that.

Not to mention, J.Lo starts the movie with an insane stage performance. Viewers can — and will — get easily distracted by the fact that she is 50 and still that hot. Hustlers is definitely supposed to be empowering. However, prepare to leave feeling slightly self-conscious that you don’t look half as great as she does, despite probably being less than half her age.

The film is rooted in the concept of breaking stereotypes, and it is rare to see a middle-aged Latina actress in a role this powerful. The white men of Wall Street are objects at Ramona’s disposal despite her employment. While drugging and robbing is obviously morally reprehensible, the switch is still effective.

Ramona’s plan forms as a result of the 2008 economic crisis. While viewers see the club thriving during the epic fun of the early 2000s, it’s nearly desolate after the crash. At first, the women are desperate to continue providing for themselves and their families, and their greed fuels the plan’s development later.

Many of them were used to struggling before the crash, so earning as much as $50,000 in one night gives them no reason to turn back. Destiny describes her former self to the reporter as the “CFO of my own motherfucking corporation.”

Ramona insists Wall Street employees are responsible for the country’s state, so they deserve the punishment. Viewers stay engaged in the classic “two wrongs don’t make a right” situation, and Hustlers is so successful because it forces them to remain in the gray area. Scafaria never shows what group is truly “good” or “bad,” and viewers must decide for themselves.

As Ramona says, “This whole country is a strip club. You’ve got people tossing the money, and people doing the dance.” The audience is forced to evaluate not just the women’s actions, but look deeper into their motivations.

Beyond the scam, Hustlers shows the more familiar struggle single, working moms face and the tumult of navigating a weak economy. These are universal experiences, regardless of how guilty you view Ramona and her accomplices.

Hustlers could have been cliche like other films about similar topics. But luckily, the characters’ developments may be a sign that society has progressed past The House Bunny era. Hustlers may be flashy and scandalous, but the sultry lights do not hide the emotional depth that the women have regardless of how they make their living.