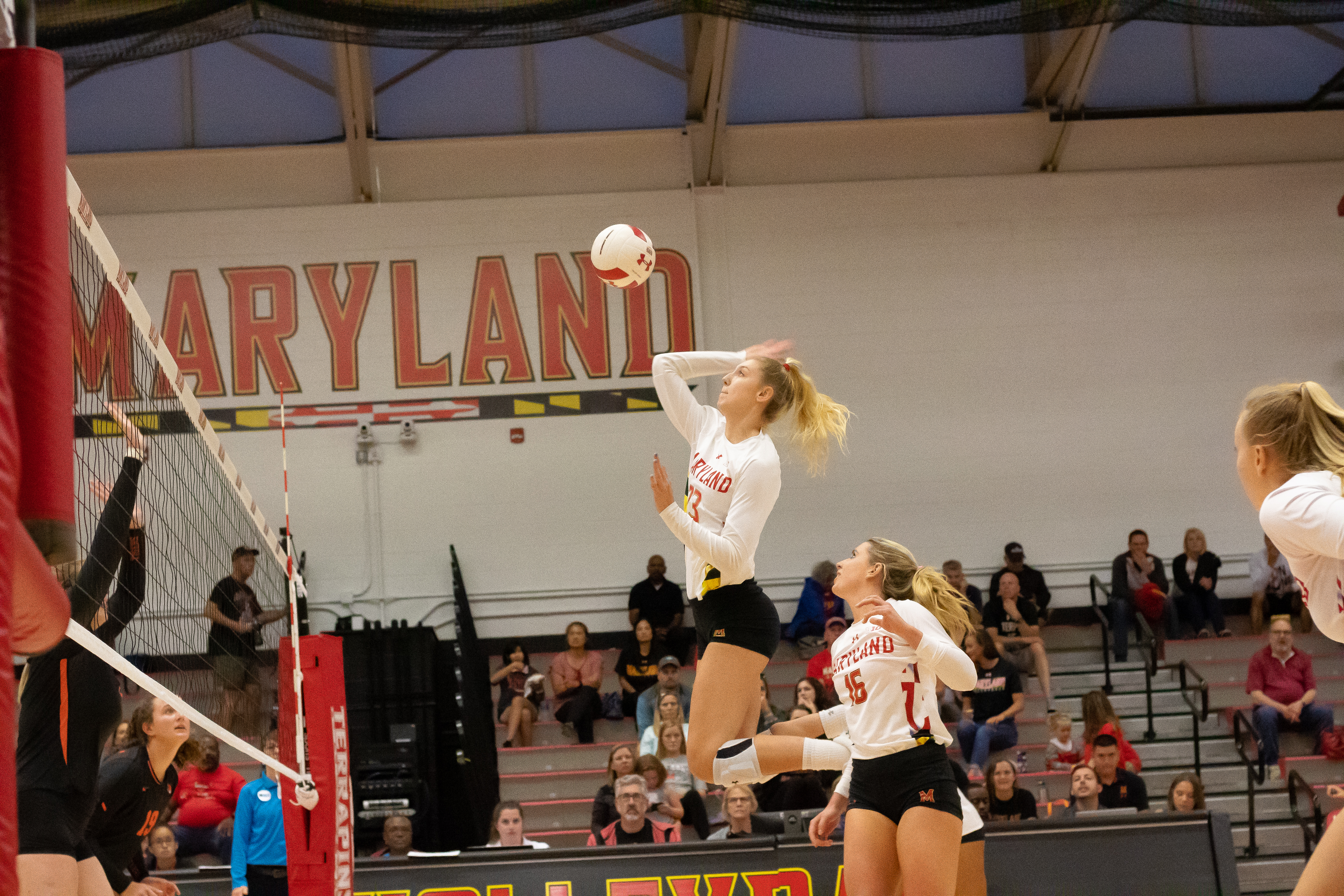 Two seasons ago, Katie Myers suffered a season-ending injury for the second year in a row, pushing her future with Maryland volleyball into uncertainty.

The 6-foot-2 middle blocker from Westerville, Ohio, had been a stalwart in the Terps’ lineup to that point, playing in 38 sets in 10 matches before going down with the injury.

Amid the doubts, Myers would make a full recovery and was named a captain ahead of the 2018 season. She started all 32 matches — her first full season with Maryland after joining in 2016 — leading the team with 53 aces and 122 blocks. Following that season, Myers was granted a medical hardship waiver, paving the way for six years in College Park.

This season, as a redshirt sophomore, Myers is off to a flying start, posting a .412 hitting percentage with 56 blocks. And on Sunday, she was named MVP of the Maryland Invite tournament, playing at the highest level since the injuries sidelined her.

“Seeing the game from two years on the sideline has helped me apply a lot of knowledge to my game,” Myers said. “Being named MVP felt good, but I’d like to be an All-American a lot better.”

[Read more: Maryland volleyball is staying poised amid its many five-set matches early in season]

At this weekend’s tournament, Myers hit a commanding .515, totaling 17 blocks over the three matches. After her final block against Princeton on Saturday, Myers stared down her opponent with confidence, a practice she said began when she was 15.

With three freshmen on the roster, the responsibility to lead is accentuated for Myers. Both the coaching staff and Myers’ teammates have been impressed by her start to the season and by her growth as a leader.

“She’s just such a good player,” freshman outside hitter Rebekah Rath said. “I look up to her so much.”

Myers’ impact goes beyond natural talent and leadership, however. Her strong court awareness is a result of her coachability, which makes it easy for Maryland’s staff to help her play at a high level.

“She’s got a really good volleyball IQ,” coach Adam Hughes said, “and she always has a good idea of what’s going on around her.”

In May, Myers was one of 12 players selected to compete with the U.S. Collegiate National Team. The team spent 12 days in Japan, playing six matches against some of the country’s best collegiate squads.

Myers believes the experience helped her become a more well-rounded and mature player — invaluable skills that have translated well to the 2019 season as the Terps boast a 6-3 nonconference record.

“Playing overseas taught me a lot about adjusting on the fly, which is something I can apply when things don’t go our way now,” Myers said.

After two redshirt seasons, Myers still has two years of NCAA eligibility after this season. But regardless of her long-term future with the program, the task at hand for Myers is improving on Maryland’s 9-11 Big Ten record from last year. The Terps open the conference season on Sept. 25 in College Park against Ohio State.

Myers’ hard work in her long journey back to full strength for the Terps has drawn appreciation from Hughes, and he’s noticed there’s a lot left in the tank for her as Maryland sets its sights on making the NCAA tournament for the first time since 2005.

“She’s always been relentless in her approach, and going through two setbacks like that tests how willing you are to keep battling,” Hughes said. “She’s someone who’s going to battle until the end.”