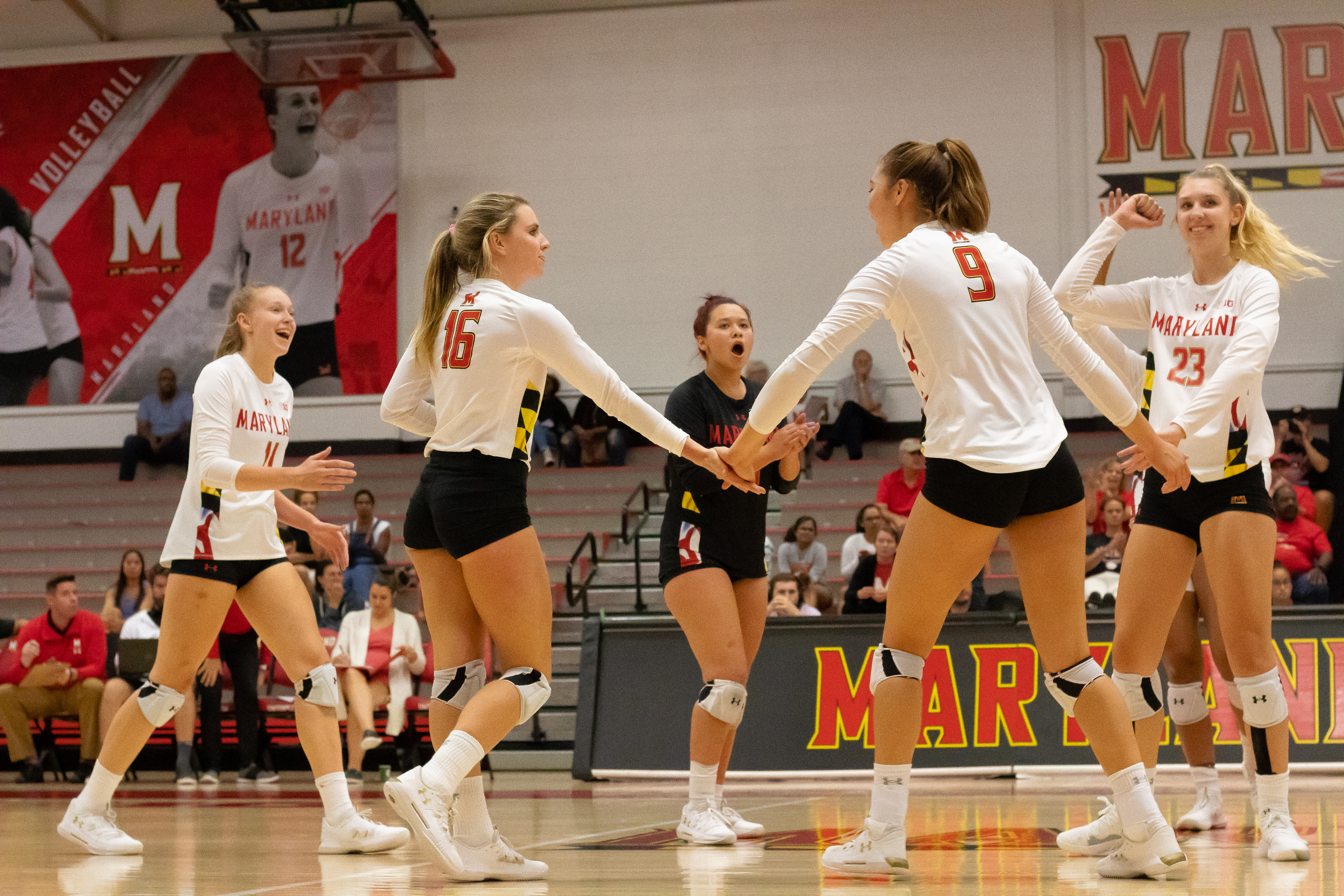 The Maryland volleyball team celebrates a point in its eventual five-set win over Princeton on Sept. 14, 2019 at the Xfinity Center Pavilion. (Tyrin Gray/The Diamondback)

In Adam Hughes’ first season as Maryland volleyball head coach in 2018, his team didn’t play its sixth five-set match until Nov. 23. Just two weeks into the 2019 campaign, the Terps have matched that total.

Maryland began its stretch of five-setters with a win on Aug. 31 against Kansas State before returning home to defeat Howard in five games on Sept. 2. The Terps dropped their next two five-setters at the UTSA Classic last weekend, losing the fifth sets by a combined five points.

And on Saturday, after opening the day with a loss against George Mason in five games — where they were edged in the fifth set, 16-14 — the Terps refused to let fatigue take over. The team bounced back from three straight five-set losses by outlasting Princeton on Saturday night, taking the fifth set 15-9.

This time, it was the mental approach that pushed Hughes’ squad over the edge.

“It’s eerily similar to last year when we lost three matches in five sets,” Hughes said. “They had plenty of opportunities to give up, and they chose not to.”

Maryland has already played 41 sets in its first nine matches of the season, accumulating a record of 6-3. Through nine matches in 2018, however, the team faced just 32 sets.

While the players admit that 10 sets in one day is a lot, they didn’t let it stop them from taking down a tough Tigers squad — one that hadn’t dropped a set in the Maryland Invite until that point on Saturday night.

“We were extremely tired in the end, but we had to manage that mentally,” outside hitter Rebekah Rath said.

Rath led the team in total kills against Princeton. She notched 21 of them, setting a new career high in what has been a breakout freshman season. Overall on Saturday, Rath had three kills in the fifth set, helping the Terps to victory in match two.

[Read more: After a disappointing UTSA Classic, being back home allows Maryland volleyball to reset]

With three-and-a-half hours between matches Saturday, the Terps had to make the most of their limited preparation time. They fit in a film session between matches, something Hughes values. In four years as an assistant at Maryland, coordinating film was part of his responsibilities.

And while a doubleheader is hardly ideal — especially when both matches go the distance — Hughes’ players came out on top in the end, pushing through and executing in set five, a frame that had been their enemy in previous matches.

“I don’t really like playing two matches in a day but that’s just the way our sport works,” Hughes said. “I really thought it came down to execution in the end.”

On Saturday, fatigue didn’t stop Maryland from getting back to .500 in five-setters — something Hughes attributes to the Terps’ vigilant training staff.

And with his team feeling both prepared and poised, the Terps exorcised their fifth-set demons to down Princeton.

“Everyday in practice, we finish with a 15-point game, and I think that has really benefited us,” outside hitter Emma Schriner said.