After a disappointing UTSA Classic, being back home allows Maryland volleyball to reset 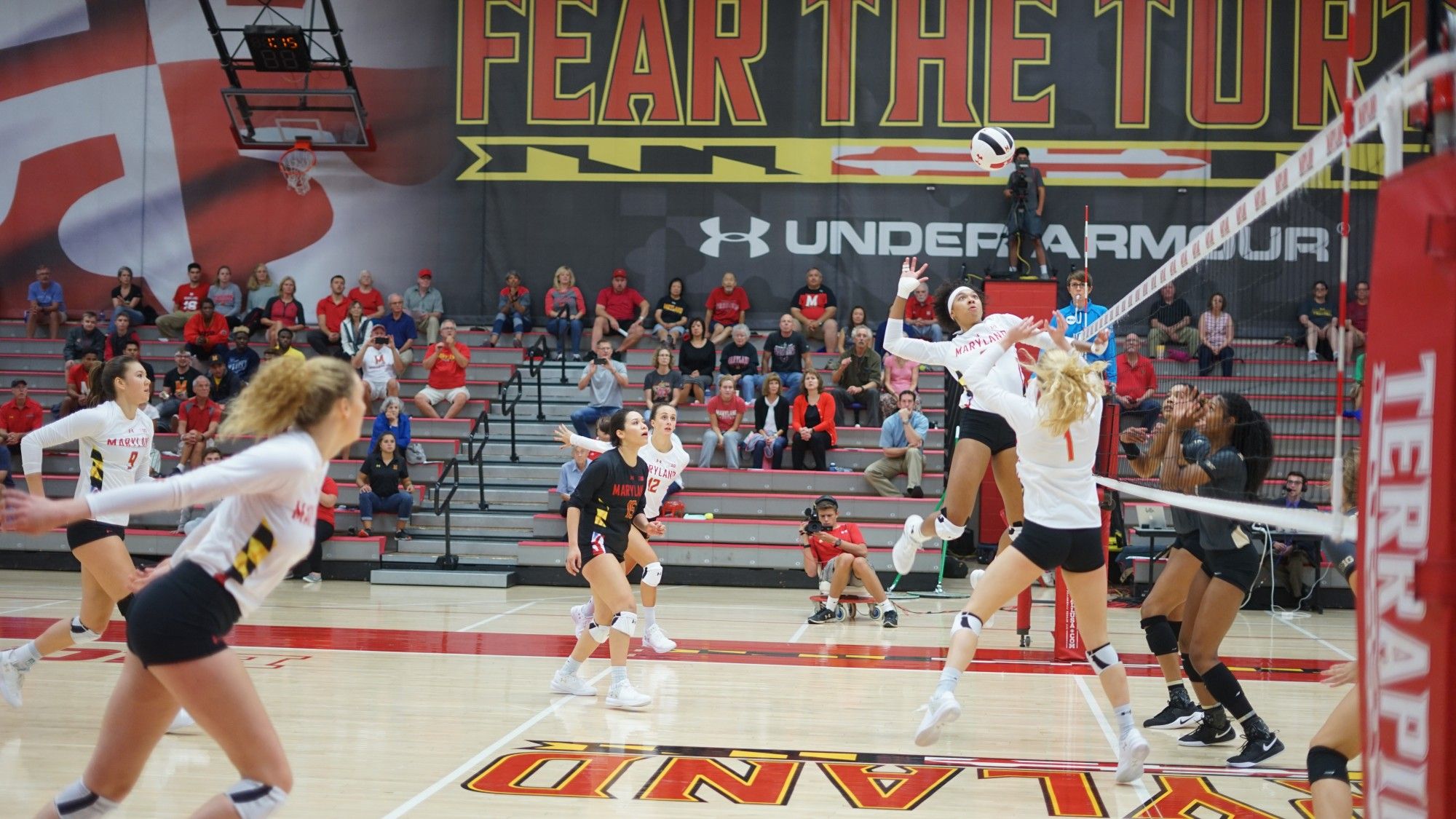 Middle blocker Rainelle Jones rises up for a kill attempt during Maryland volleyball’s 3-1 loss to No. 16 Purdue at XFINITY Pavilion on Sept. 26, 2018. (Corey Hart/The Diamondback)

Since Maryland volleyball’s season began Aug. 31 in Raleigh, the team had just one day to practice at home before Tuesday. The Terps had to turn around quickly last week to travel to San Antonio after they edged out a five-game victory against Howard Sept. 2.

Maryland ended up going 1-2 in the UTSA Classic, with losses to UT-Rio Grande Valley and Houston — both in five sets. But coach Adam Hughes’ squad salvaged a win Saturday night against UT-San Antonio, in large part due to outside hitter Erika Pritchard’s 20-kill performance.

After their weekend of two flights and three matches, the Terps returned to practice at the Xfinity Pavilion Tuesday. They value the week of preparation at home before taking on Arkansas, George Mason and Princeton in the Maryland Invite this weekend in College Park.

“We have a more traditional week to prepare,” Hughes said. “The last few weeks have been broken up by travel, so it’s nice to be at home.”

After a disappointing UTSA Classic, Maryland was pleased to have the opportunity to reconvene and refocus. The Terps began Tuesday by watching film. And while it focuses on what they can improve on early in the week, the team shifts its attention to the upcoming opponents as those matches near.

“Film went really well today,” libero Allegra Rivas said. “We went over all the things we need to fix after last weekend.”

In practice, Maryland focused heavily on serving and passing in an attempt to correct an unsightly aspect of its 1-2 tournament — the Terps combined for 36 service errors over the three-match weekend. But the team feels being back at home for practice can boost its confidence.

After a narrow five-set win against Howard, Hughes was proud of the way his players entered the next week of practice with the aim to improve. And following another tight weekend that didn’t go in the Terps’ favor, the coach hopes the win over UTSA to close the tournament can galvanize his unit.

“Our morale is exactly where a coach would want it to be.” Hughes said. “I was actually really proud of the way we responded to Howard — it was almost like a loss to us.”

With eight upperclassmen on the roster, the Terps keep last year’s nonconference slate in mind. Last season, Maryland lost three five-gamers in the buildup to Big Ten play, including a loss to Princeton at the Temple Invite.

“Last year during preseason, we kind of took a step back,” Rivas said. “A lot of those losses could have hurt our tournament chances, so we’re working really hard to do well in preseason.”

The Terps will have had a full six days off before facing Arkansas on Friday night. They look forward to taking on teams who have a tough conference to compete in themselves, despite dropping games to a few small schools in San Antonio.

Maryland believes that after a week of film study and home practices, they’ll be well prepared for the competition this weekend.

“Staying at home is always great,” middle blocker Rainelle Jones said. “We get a lot more practice in rather than just focusing on traveling.”