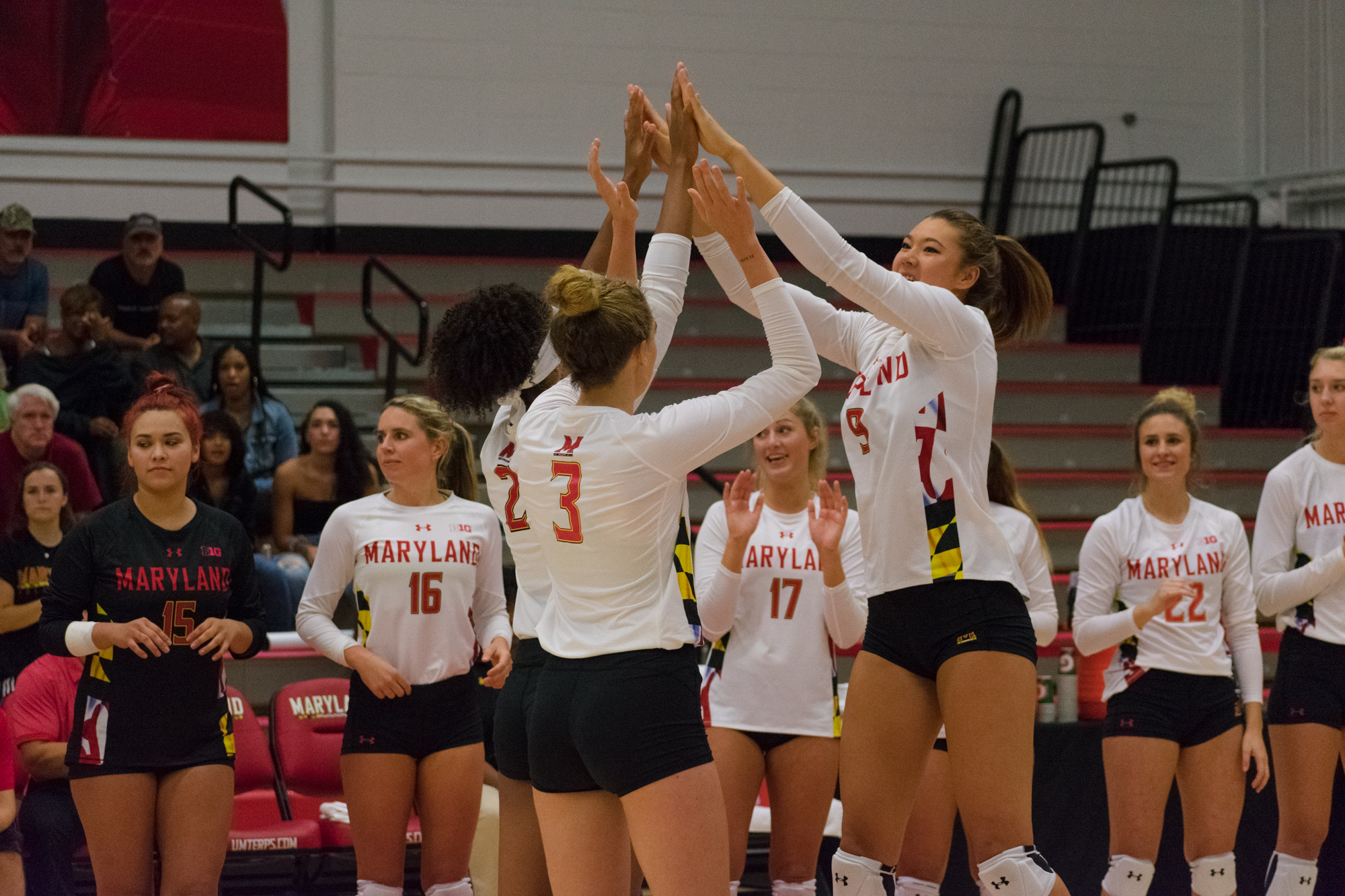 Playing in her hometown of San Antonio, middle blocker Jada Gardner jumped for a block in Maryland volleyball’s Saturday night match against UT-San Antonio, pummelling it back into the Roadrunners’ side of the floor to seal the win.

So after disappointing losses in Friday’s match and in its first contest Saturday, Maryland could breathe a sigh of relief. Coach Adam Hughes’ squad held leads in both matches before faltering down the stretch. This time, though, the Terps held off their opponent to escape the UTSA Classic with a win.

Maryland volleyball began day two of the tournament with its second five-game loss of the weekend against Houston. The Terps have gone five games in four of their first six matches, accumulating a record of 2-2 in those contests.

“I think the team is learning what it’s like to have high expectations,” coach Adam Hughes said. “These teams probably targeted us as the match to win.”

Maryland started with a victory in a streaky first set, 25-23, featuring 12 ties before the Terps pulled away against the Cougars. Setter Taylor Smith set up middle blocker Rainelle Jones for the team’s 25th point. Jones finished the match with 10 kills, the first time she’s had double-digit put-aways this year

After the second-set victory, the contest went downhill for Maryland, though. The third set was a game of streaks once again, but this time, the set went to Houston, 25-22. The Cougars’ charge was led by outside hitter Abbie Jackson, who tallied four kills in set three as part of a 16-kill performance.

“We let their side control what we did,” middle blocker Katie Myers said. “We were a bit frantic, but it’s nothing we can’t improve on.”

Maryland tried to recover in the fourth set, jumping out to a 4-1 lead. The Terps could not overcome their eight errors in the set, though, and Houston forced a fifth set.

Tied at 12 in the final frame, Houston took three of the next four points to hand Maryland its second consecutive loss. Even though the Terps shined in the ace category, finishing with 11, the team could not overcome its 15 errors in the final three frames.

After a strong performance in the tournament opener on Friday, pin hitter Rebekah Rath never got going against Houston on Saturday. She finished the match with just four kills and a hitting percentage of .000. However, Rath turned things around against UTSA, reaching a double-digit kill tally.

“[Rath] didn’t make any bad decisions offensively, and she’s positioned herself to help us out on serves,” Hughes said.

But the woes of the first game initially carried over to the first set against the Roadrunners. Outside hitter Erika Pritchard started off with two errors in a set that looked eerily similar to the final three of match one on Saturday. After the tough start, however, Pritchard took over for the Terps, finishing with the most kills for either team as the Terps prevailed in their final match of the UTSA Classic.

“We did a good job bouncing back in the final match against UTSA,” Pritchard said.