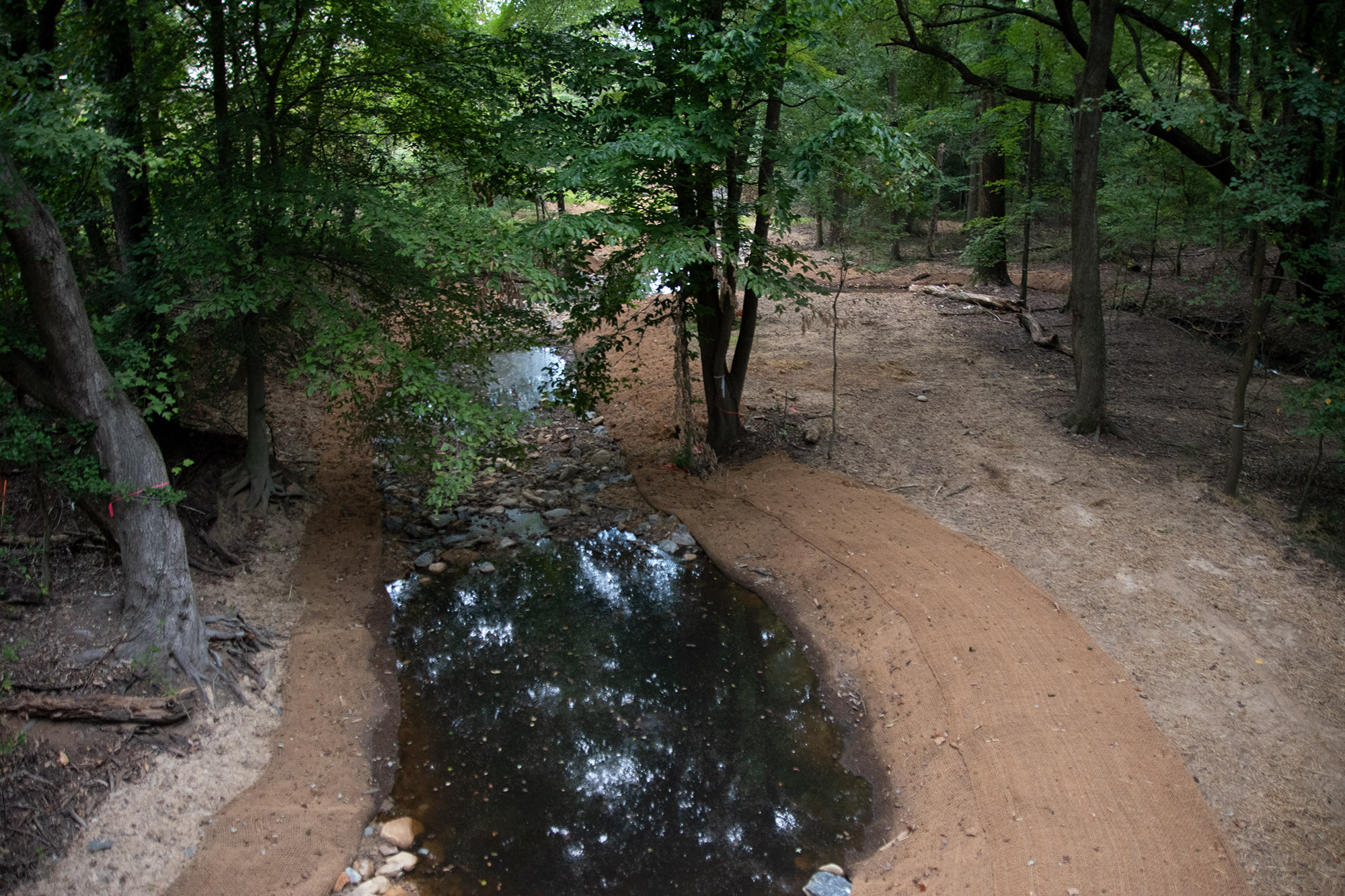 The creek that flows from University Boulevard to Xfinity Center. (Joe Ryan/The Diamondback)

A $2 million restoration project of the creek that runs from University Boulevard to Xfinity Center is set to be completed next month, according to University of Maryland Facilities Management.

“It was just going to get more and more eroded,” said Decker, who works with the state’s natural resources department.

With the completion of the project, the area will again be habitable for fish, salamanders and other aquatic animals, said Glenn Therres, an associate director for Wildlife and Heritage Service at the department.

Discussions to restore the stream began about five years ago, Decker said. The restoration originally included the upper part of the stream, which is located across University Boulevard, near the golf course. But in early 2018, the Department of Natural Resources decided it would be better to start its focus on downstream areas.

The university paid for most of the design and early parts of the project, but the grant covered the majority of the construction, said Bill Olen, the planning and construction director for capital projects in Facilities Management.

The project is a joint effort between the University of Maryland and a grant from the Chesapeake and Atlantic Coastal Bays Trust Fund via the Maryland DNR. The grant was worth $1.2 million, part of the $25 million that the department gives in grants every year.

Margaret Palmer and Michael Williams, professors from the entomology department, monitored the restoration’s progress. Williams said the idea is to reduce the amount of nitrogen and phosphorus in the water, and he will continue to monitor the creek after the restoration is complete.

Ray Weil, a soil scientist and professor in the university’s environmental science and technology department, said the restoration is a good first step. He added there’s more that the university can do to help the creek, including reducing the amount of impermeable surfaces and improving the infiltration overall.

Impermeable surfaces — like sidewalks and pavements — can’t absorb water. As a result, the rain that falls on them drains straight into waterways, carrying chemicals and excess nutrients along that can harm the environment.

One of the most important things, Weil said, is that the soil absorbs rainwater so that minimal water drains into the creek. He recommended that the university installs rain guards to slow the water as it drains.

“The health of the creek is really [dependent] on how we manage the whole campus that drains into the creek,” Weil said. “If we do those things, then restoring the creek will be more worthwhile because it just won’t get overwhelmed during flash floods.”

The project has gained praise from students. Estefany Pineda Hernandez, the vice president of this university’s chapter of the Wildlife Society, said she hopes the restoration will allow people to appreciate the campus’ biodiversity.

“With all the urban wildlife that we have, we mostly just see squirrels and raccoons,” said Pineda Hernandez, a senior environmental science major. “We rarely see that many microorganisms or amphibians. But if we see them around creeks, that would be really cool.”

Decker said she’s glad to see the project nearing completion and hopes the stream could be used for educational purposes, such as water quality testing.

“We’re really hoping that people will take notice and be happy that the stream is looking better, she said. “We’re really excited it’s almost done.”