“Out here by ourselves”: Women aerospace majors are fighting to increase their numbers 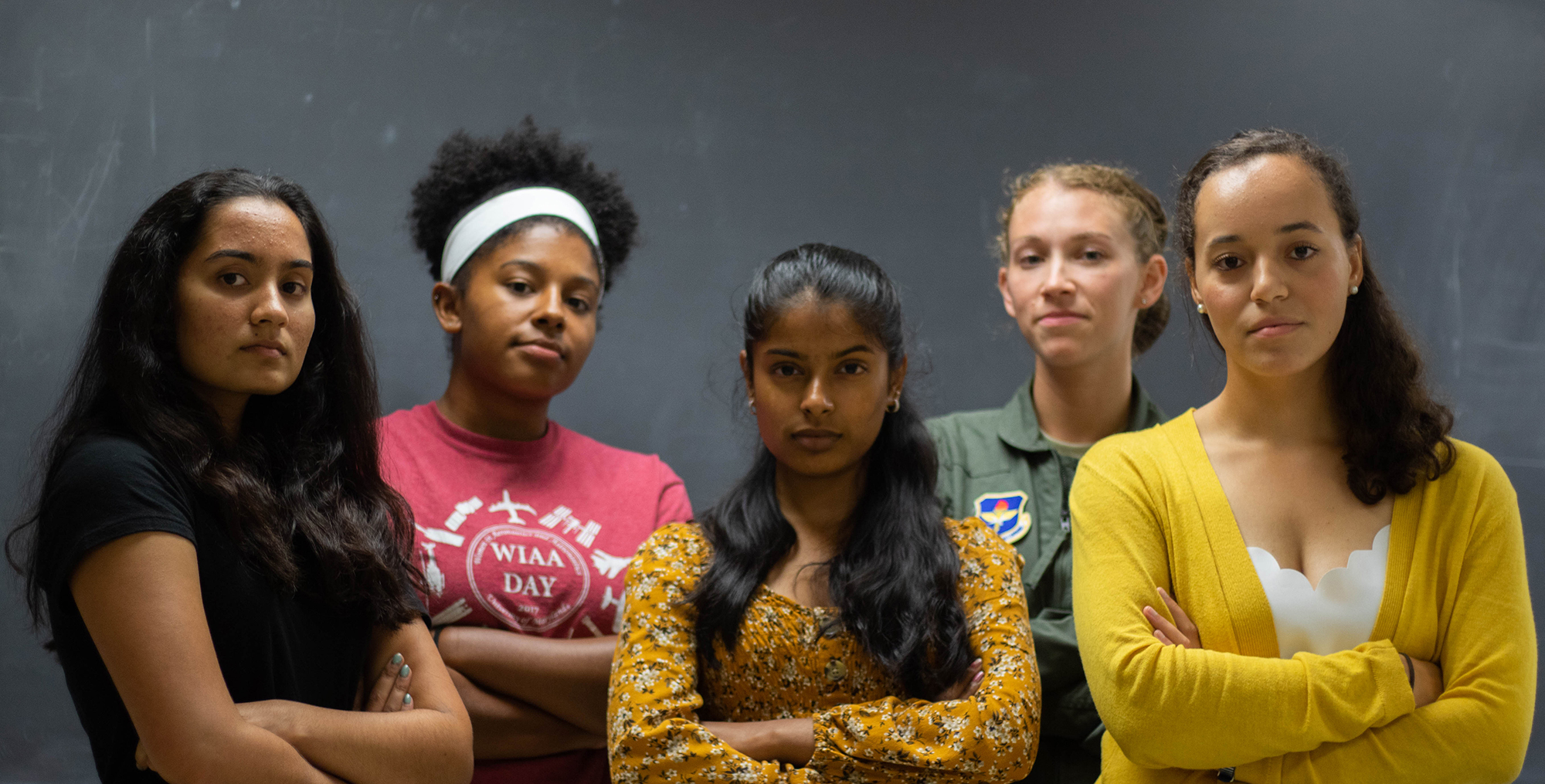 On the first day of classes for the spring semester of her freshman year at the University of Maryland, Julia Mittelstaedt walked into her aerospace engineering class and stopped in her tracks.

At first glance, the class seemed like any other in the major. But as she skimmed the lecture hall, she noticed something: Only about 10 out of 150 students were women.

“There’s a mindset when you see all the men in the class,” she said. “You think: ‘Maybe I shouldn’t be here. Maybe I can’t do it.’”

According to fall 2018 data — the most recent available from the Office of Institutional Research, Planning and Assessment — this university’s engineering college is its most male-dominated — with only 24.9 percent women. And within that college, aerospace engineering is at the very bottom of the list: Fewer than 12 percent of its students are women. IRPA data shows female enrollment has not reached 20 percent since fall 2003.

Women in the field face adversity at the national level as well, as they make up over half of the total college educated workforce in the U.S. However, they make up only 28 percent of the science and engineering workforce, according to a 2018 study from the National Science Foundation. At this university, people like Mittelstaedt are fighting to reverse the trend.

Mittelstaedt is president of the university’s Women in Aeronautics and Astronautics club, which was created with the mission of motivating women to pursue careers in the industry.

Along with the 200 women it has attracted from aerospace and other engineering fields at the university, the club also hosts events with middle and high school-aged girls. The goal, Mittelstaedt said, is to show them a community of women who are passionate about aerospace.

Too often, WIAA members say, girls shy away from the field before they reach high school.

“They never even consider going into it — and maybe they are really good at it,” Mittelstaedt said. “You could have a lot of females that have ideas you never get to see.”

WIAA hosts a range of social and networking events — coming together for pizza nights, scavenger hunts and meetings with professionals in the field. Sometimes, they offer tutorials on programs they’re learning in school, like MatLab.

The club was a source of inspiration for Anusha Dixit before she even arrived at this university.

In high school, Dixit attended WIAA Day — one of the outreach events hosted by the club. It was encouraging to meet the women of the club, she said. Now, she’s a junior aerospace engineering major and an active WIAA member.

Still, she said she struggled to find women in her major when she first started at the university.

“Wow,” she remembers thinking. “We’re really out here by ourselves.”

[Read more: The University of Maryland is getting a new $50 million engineering building]

The engineering school as a whole promotes diversity with the university’s Committee on Diversity and Inclusion, which looks at creating programs to improve equity within the school, said Norman Wereley, the aerospace engineering department’s chair.

“We want to attract as many students to come into aerospace engineering as possible and the way to do that, I think, is to ensure that we have a diverse student population,” he said.

This past June, the engineering school received a Bronze Award from the American Society for Engineering Education — a recognition meant to honor engineering programs that work toward recruiting a diverse group of students.

It was one of just 29 schools on the list that were starred as “exemplar,” indicating that the panel of engineering deans judging the application felt the school showed “strong efforts” and “significant outcomes in the program,” according to Norman Fortenberry, the organization’s executive director.

“As a longstanding core value, a diverse educational community is one of the Clark School’s biggest strengths,” said Darryll Pines, the engineering school’s dean. “We will continue to work on a variety of approaches to continue building a pipeline of diverse talent pursuing the fields of engineering.”

Samantha Howard, a senior in her fifth year in aerospace engineering, said that she has seen the group grow throughout her time at this university, .

But the department — and the field — still have a long way to go, Dixit said. As one of the few women of color in her office during her internship this past summer, she picked up slight differences, such as increased dismissiveness, in the way coworkers spoke to her as compared to another intern, who was a white male.

“This is something we kind of know how to deal with at this point,” she said. “It’s to be expected.”

Mittelstaedt said she’s hopeful that with the help of WIAA and the university, women’s numbers in the field will continue to rise. Ideally, in the next five to 10 years, she said, the major will approach an even distribution of men and women.

But for now, she said, women in her club and in the major as a whole must feel proud of the things they do achieve — and embrace the discrepancy as something that makes them unique.

“There’s a sense of pride you have when you say ‘Hey, I’m a female aerospace engineer,” Mittelstaedt said. “Being part of a group that specifically stands for that kind of adds to that pride.”