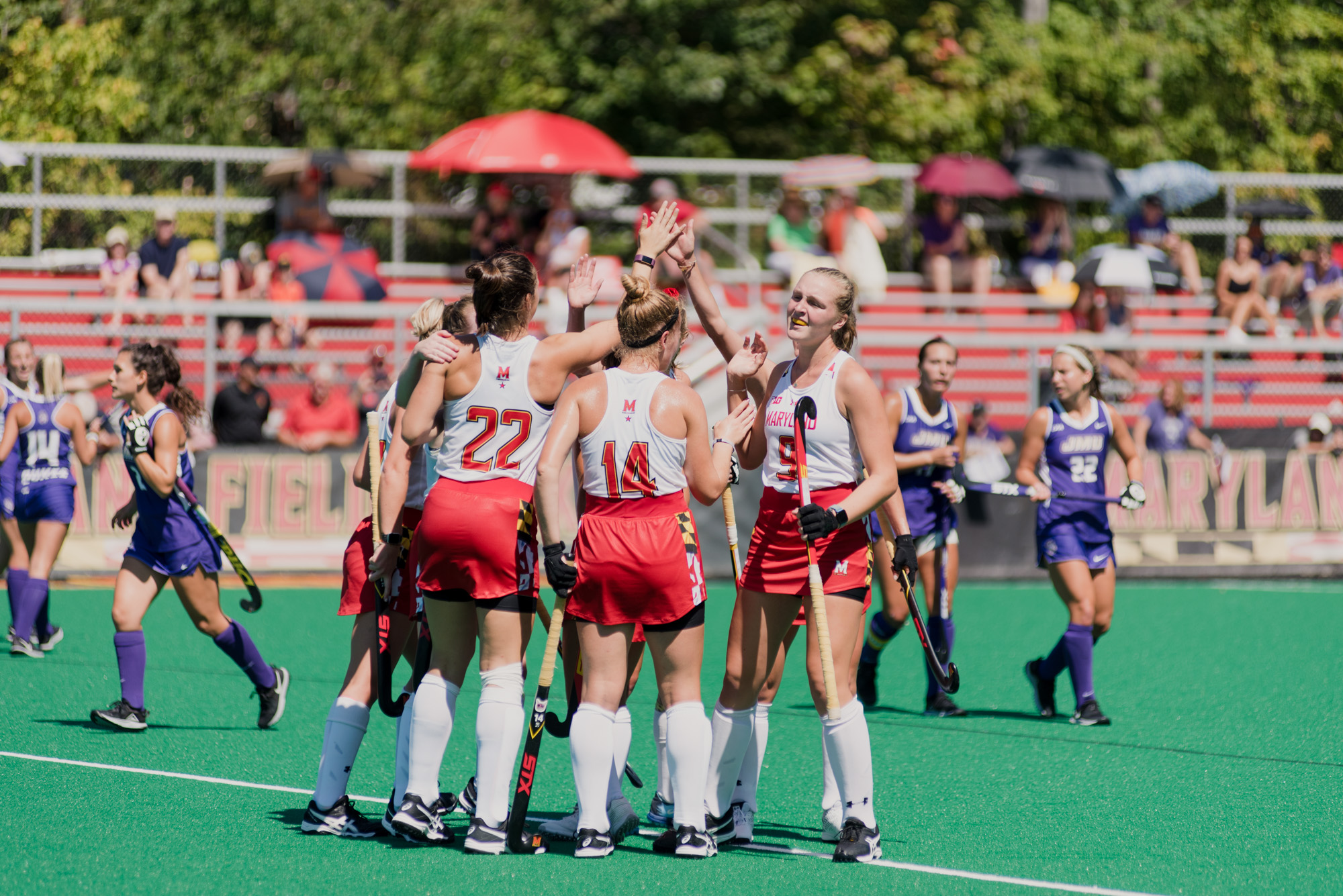 The Maryland field hockey team huddles up during its 4-0 win over James Madison on Sept. 15, 2019. (Gabby Baniqued/The Diamondback)

The Terps had been impressive on both ends of the field, peppering goalkeeper Caitlin Nelson with 17 shots on goal. Meanwhile, the defense looked impenetrable, with goalkeeper Noelle Frost making a series of strong saves to preserve her third shutout of the season.

But despite the Terps’ dominance, Bam pushed the team to stick to the tactics that had gotten it that far, especially after the emotional rollercoaster of Maryland’s shootout victory over No. 6 Virginia on Sunday.

And Maryland did just as Bam asked, as it had the whole game, dominating possession and limiting the Dukes to few chances en route to a 4-0 victory Sunday.

“I think we were a dominant team today,” coach Missy Meharg said. “We found a way to get two [penalty] strokes, which is great.”

Maryland built off the intensity of Friday’s matchup, with midfielder Emma DeBerdine forcing Nelson into a save early in the first quarter. The subsequent goalmouth scramble resulted in a penalty stroke, and defender Riley Donnelly swept the ball into the bottom left corner to give the Terps a 1-0 lead.

“Taking strokes, more than anything, is a mental game,” Donnelly said, “I just tried to tell myself that I’m just at practice, taking strokes and just go from there.”

Maryland’s attack continued to probe, with Nelson making five more saves to keep the Dukes in the game. And while James Madison managed to create a few half-chances from their two penalty corners, they weren’t able to test Maryland’s cage, failing to record a shot on goal in the first quarter.

It was more of the same for coach Missy Meharg’s squad in the second frame, with midfielder Madison Maguire extending Maryland’s lead three minutes into the second. Midfielder Kelee Lepage drifted into the shooting circle after a sustained period of possession for the Terps before firing a shot toward Nelson’s cage. And while Nelson fought off Lepage’s effort, she was helpless to Maguire’s rebound — her fourth goal of the season.

“[Maguire is] a leader … other teams respect her so much,” Meharg said. “You can be sure that where she goes people will clear with her and open up space for others.”

[Read more: After a dominant win over Towson, Maryland field hockey is confident in its deep lineup]

Meanwhile, the Terps’ backline was equal to any James Madison attack in the second quarter, holding the Dukes shotless.

The Terps continued to show off their attacking prowess in the second half. Maguire was denied a chance to get her second goal of the game, with her backhanded effort caroming off the post early in the third quarter. Shortly thereafter, defender Bodil Keus rifled a shot into the top corner off of a Bibi Donraadt penalty corner to push Maryland’s lead to three.

And after the Dukes were judged to have infringed upon a Maryland goal-scoring opportunity, Donnelly slotted away her second penalty stroke of the game to give the Terps a 4-0 lead.

Frost was called into action toward the end of the third period, diving low to fight off a Caroline Cahill shot before batting away a couple of rebounded efforts to protect Maryland’s clean sheet.

With the Terps holding a commanding lead entering into the fourth quarter, Meharg rotated the squad, with goalkeeper Skye Joegriner replacing Frost midway through the frame.

“When you [have] a three-goal difference, you can start having different people play,” Meharg said. “[They] serve each other to get as many of their teammates into games.”

And while the Terps weren’t able to add a goal in the fourth, the defense kept James Madison’s attack at bay, with Joegriner forced into making only one save for the Terps, who moved to 6-1 on the season.

With matchups against No. 17 Penn State and No. 5 Princeton looming, the Terps will be aiming to build on what has been a fruitful Terrapin Invitational.

“We just keep on going,” midfielder Nathalie Fiechter said, “We want to win everything we can.”