After a dominant win over Towson, Maryland field hockey is confident in its deep lineup 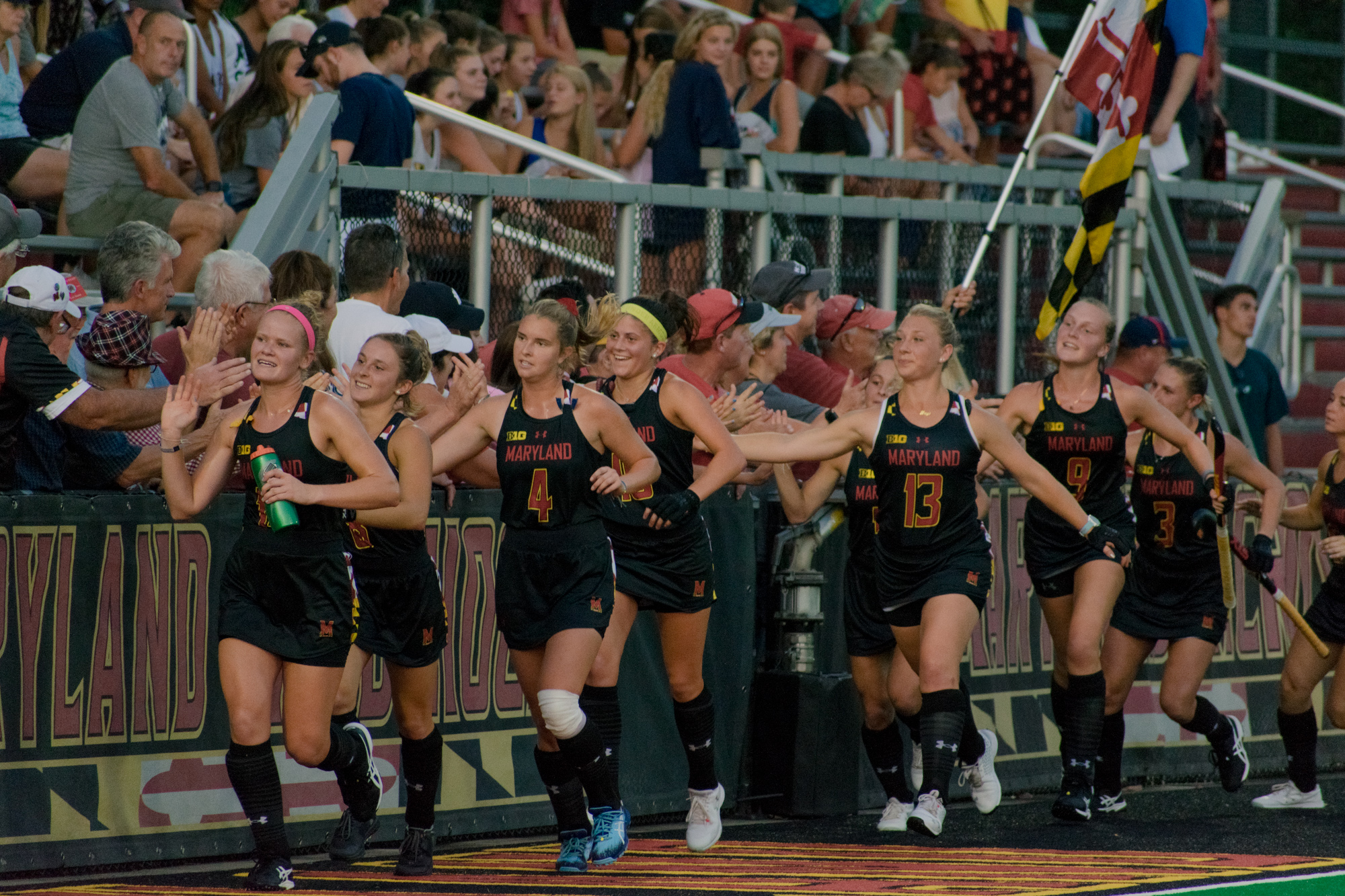 When Kelee Lepage fed a pass into Sam Zywna’s path early in the fourth quarter of Maryland field hockey’s Wednesday night clash with Towson, the forward had a lot of work to do.

A Tigers defender drove into her from behind, forcing Zywna to use her back to shield the ball. Without a bevy of attacking options, Zywna got creative.

The freshman shifted the ball onto her backhand, before making a no-look flick pass that skipped just beyond goalkeeper Tess Okkere’s grasp. The only question was if a Maryland attacker could get on the end of it.

That question was answered by fellow freshman Emma DeBerdine, who stumbled toward the net, having sprinted across from beyond the shooting circle. DeBerdine got the vital touch, sending the ball into the empty cage and pushing Maryland’s lead to 4-0.

The sequence punctuated a dominant performance, in which the Terps’ quick start allowed coach Missy Meharg to make a series of tactical and rotational adjustments — adjustments that may prove crucial in Maryland’s matchups against No. 6 Virginia and James Madison in this weekend’s Terrapin Invitational.

“I’m really pleased with the younger players getting minutes,” Meharg said. “I think we’ll see a lot of these players compete this weekend in the tournament.”

[Read more: No. 4 Maryland field hockey gets back on track with 5-0 drubbing of Towson]

After struggling to create clear-cut scoring chances in last weekend’s 1-0 defeat to Duke, the Terps made a few minor changes, hoping to spur the attack back into form.

One of these changes was moving defender Hannah Bond into the midfield. The move paid dividends, as Bond netted her first goal of the season to give Maryland an early lead — a lead that would balloon to 3-0 a little more than five minutes into the game.

[Read more: After being shut out, Maryland field hockey’s offense looks to return with a vengeance]

Bond’s goal set the stage for an offensive showcase. The Terps had more goals (3), shots (13) and penalty corners (8) in the first quarter than in any other quarter this season.

With Maryland in command, Meharg took the opportunity to get some youngsters involved. Consequently, 21 Maryland players saw the field — a new season high.

And while the Terps weren’t able to match their first quarter output, the team still stayed in control and maintained a high level of performance, despite using a more rotated group of players.

“We did build on the points we wanted to focus on throughout the game,” Bond said, “Whether that was our press or other technical details.”

The Terps continued to keep the ball out of their own half, owing in part to the success of their short-range passing game which stayed at a similar quality throughout the game despite the number of changes made.

Nowhere was the effectiveness of this short passing tactic more apparent than in DeBerdine’s goal, as senior midfielder Madison Maguire slipped Lepage into the shooting circle.

Lepage, a defender by trade, cleverly played the ball into Zywna’s stick, who put the ball into a dangerous area. And DeBerdine, the mercurial midfielder whose speed and skill has helped add another goal threat to Maryland’s midfield, made a long, instinctive run to finish off the play.

“We were moving towards the goal cage and I was on the other side of the field,” DeBerdine said. “And Sam Zywna got a hold of the ball and just turned and spun and hit me right on my stick — it just bounced right off me into the cage.”

With Meharg’s squad getting a number of young players involved, the Terps are hoping that these tactical and lineup changes will help push the team to two victories this weekend.

“Utilizing a lot of players and also resting some of our top players something that we wanted to do,” Meharg said. “I feel we did a good job of that.”