No. 4 Maryland field hockey gets back on track with 5-0 drubbing of Towson 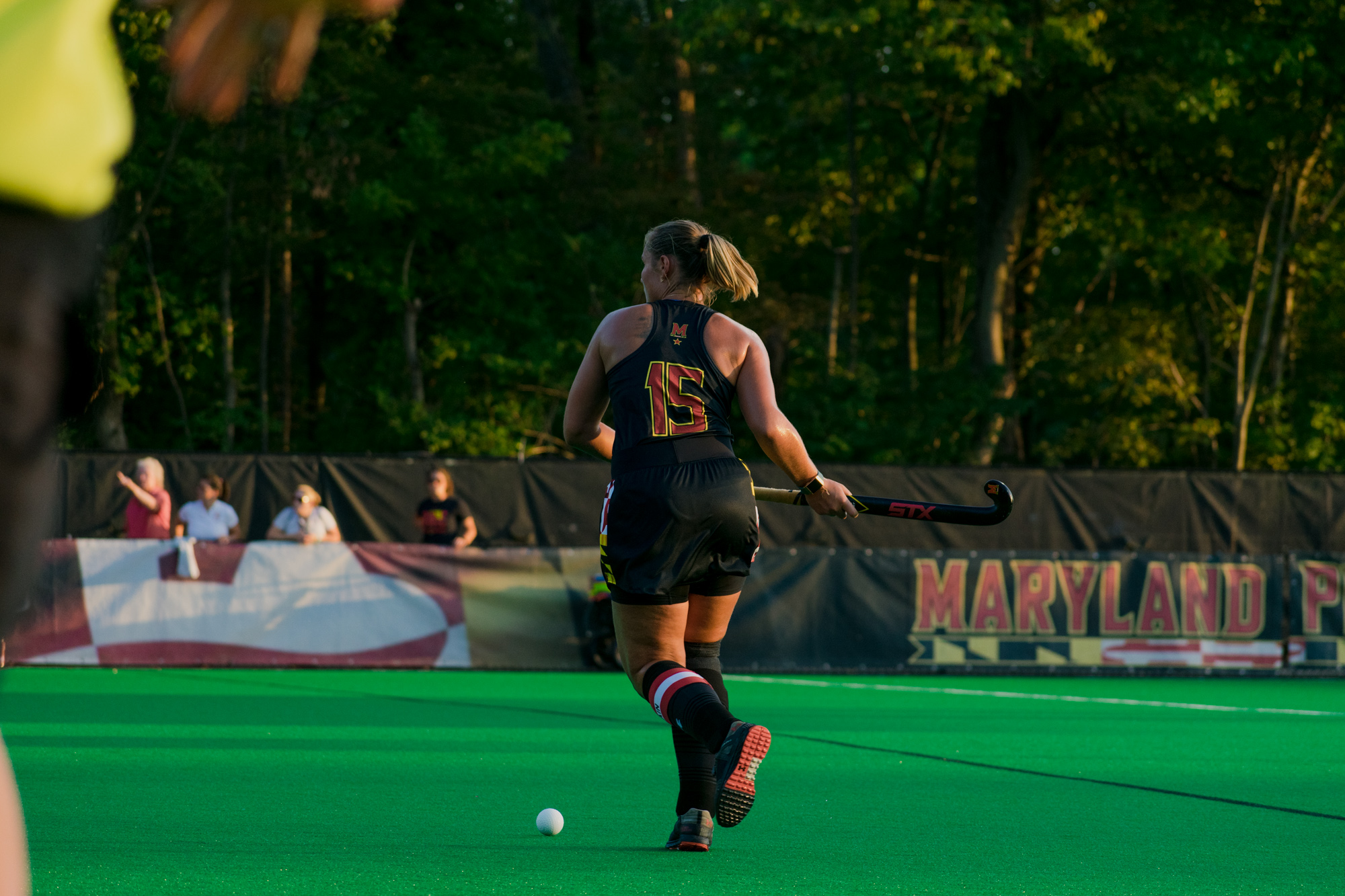 Despite Maryland field hockey holding a 3-0 lead over Towson on Wednesday, coach Missy Meharg spent the whole of halftime looking for more out of her team.

After scoring three goals in the first six minutes of the game, it looked as if the Terps were going to hang a crooked number on the Tigers. However, the offense slowed in the second quarter, recording only four shots.

So, Meharg pushed her team to continue to press on and attack Towson — something that it had failed to do in Sunday’s matchup against then-No. 3 Duke.

The Terps responded, scoring two goals in the fourth quarter to bookend a dominant attacking and defensive display in which they outshot Towson 27-0 en route to a 5-0 victory.

“We spoke about … starting with a really high intensity and getting ourselves on the board early,” junior defender Hannah Bond said. “It was really good that we came out with that mentality.”

Meharg’s squad had a point to prove after getting shut out for the first time this season in Sunday’s 1-0 defeat to the Blue Devils. The Terps spent the week working on finishing and discipline, hoping to reestablish their offensive firepower against a Towson side they have dominated in recent years — most notably in an 8-0 drubbing in 2017.

And after struggling to contain Duke’s speed Sunday, Maryland embraced their own quickness Wednesday in the first quarter. The Terps’ attackers made a series of incisive runs into the shooting circle and used their quick, short passing to dissect a hapless Towson defense.

“I applaud the team for taking on a very simple tactic, which was to pass,” Meharg said. “No dribbling. I thought in the first quarter we really stuck to that.”

Bond opened her scoring account for the season with a short-range effort just over a minute into the game to give Maryland the lead. Less than two minutes later, midfielder/forward Madison Maguire added a second for the Terps, deflecting Bodil Keus’ penalty corner effort beyond Tigers goalkeeper Tess Okkerse.

Maryland pushed its lead to three in quick succession, as freshman midfielder Linda Cobano found the back of the cage from a penalty corner. The Terps racked up 13 shots in the first period, seven of which were on target — their best single-quarter tallies in both categories this season.

“We definitely realized that we needed to get more shots on goal and just keep shooting,” freshman midfielder Emma DeBerdine said. “That was a big part of what we worked on today.”

The Tigers defense was far more resolute in the second quarter, though, conceding four shots. And while Maryland continued to ramp up the pressure on offense, Towson didn’t budge, shutting the Terps out in the second frame.

Despite their improved defensive performance in the second quarter, the Tigers struggled to get the ball to their attack, failing to record a shot in the first half.

“I think our players have been very vigilant in making sure they have defensive structure,” Meharg said. “If a team wants to play with two high forwards or three high forwards or one high forward, we’ll always have a player in a line marking them so they can’t get the ball.”

It was much of the same in the third quarter, with the Terps continuing to dominate possession. However, the Tigers were able to knick the ball away from Maryland’s defenders at times, putting them in advantageous attacking positions.

But those dangerous chances never gave way to results, and when the game clock struck zero, the Tigers’ shot total mirrored it.

“I think we did kind of take our foot off the gas … and let them have a few fast breakaways,” Bond said. “But I think we did well to keep a clean sheet.”

Maryland added to its lead early in the fourth quarter, as freshman forward Sam Zywna wriggled her way out of a defensive challenge to flick the ball in front of Towson’s goal. DeBerdine, also a freshman, reacted well to the pass, calmly slotting the ball away to give the Terps a 4-0 lead.

“The fact that [the freshmen] were setting up goal-scoring opportunities for us,” Bond said, “That’s such a crucial part of the game. I think they did really well.”

Six minutes later, forward Jen Bleakney scored, the beneficiary of a well-worked penalty corner routine. Bleakney’s goal pushed her to three on the season — tied for the team lead with Maguire.

The ease by which the Terps took down the Tigers was a confidence booster for the more challenging road that lay ahead: bouts with No. 6 Virginia and James Madison in the Terrapin Invitational.

“What was nice about this game is that we were able to use this game to prepare for Virginia on Friday,” Meharg said. “A lot of the things we were doing were to set up for what we’re going to be doing on Friday and Sunday with James Madison.”