No. 4 Maryland field hockey outlasts No. 6 Virginia, 3-2, after shootout 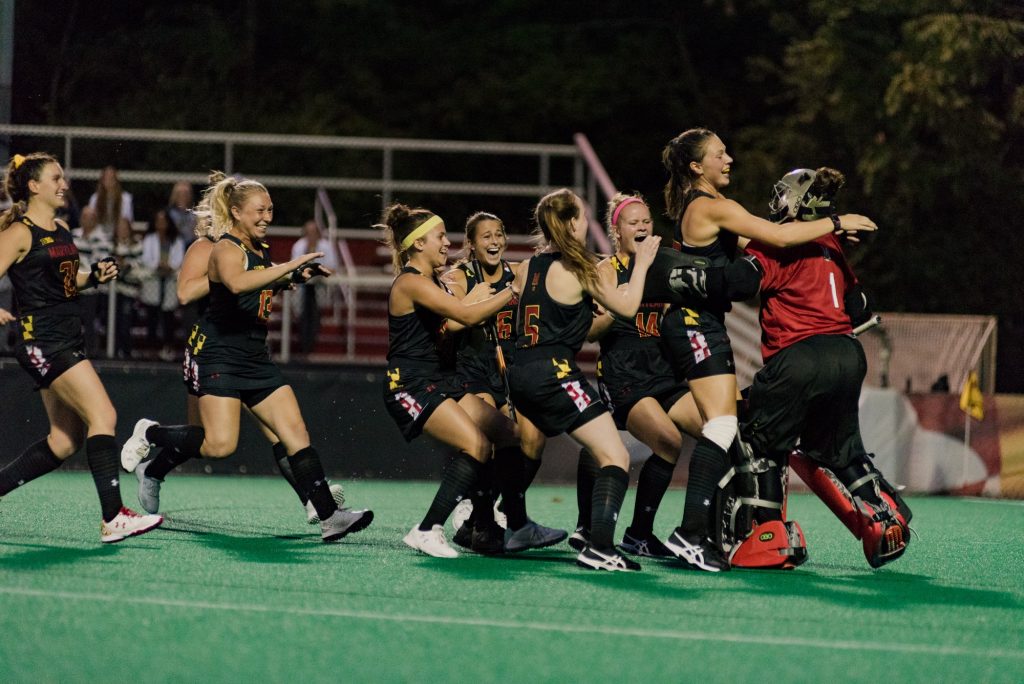 After 80 minutes of game time, No. 4 Maryland field hockey and No. 6 Virginia remained level, sending the game into a decisive shootout — Maryland’s first since 2016.

And when forward Bibi Donraadt netted what appeared to be her second goal of the shootout, Maryland looked to be firmly in the driver’s seat to secure a hard-fought victory.

But the referee ruled the goal illegitimate, eliciting an animated response from coach Missy Meharg. Meharg’s protests pushed the referees to review the attempt and eventually, they sided in the Terps’ favor, awarding Maryland the tally.

In need of a subsequent equalizer on the ensuing penalty stroke to keep the game going, Virginia failed to beat the senior netminder, sending the Terps into bedlam after an arduous 3-2 comeback victory over the Cavaliers on Friday.

“I couldn’t be more proud of our women and the way we rotated and they serviced each other,” Meharg said. “We’ve now experienced every facet of the game.”

[Read more: After a dominant win over Towson, Maryland field hockey is confident in its deep lineup]

Despite Maryland taking a 12-8 shot advantage into the fourth quarter, goals from defender Amber Ezechiels and midfielder Rachel Robinson had given Virginia a 2-1 advantage. But the Terps quickly made their attacking force felt, even after Cavaliers midfielder Erin Shanahan got behind the defense and whistled a shot just wide of Frost’s cage.

Shortly after Shanahan’s attempt, midfielder Emma DeBerdine carried the ball deep into the shooting circle. The freshman wound up before sending her shot past goalkeeper Lauren Hausheer to knot the game at two.

Given Maryland’s struggles with defending penalty corners, fans were tense when Virginia earned one with five minutes left in the fourth. However, Frost continued her strong start to the season, making a diving save to prevent the Cavaliers from taking a late lead, sending the game into overtime.

With the lineups reduced to seven players each, overtime proved to be an attacking affair. Never was this more evident than when Frost was forced to make a double save to keep the Terps in the game early in the period.

“Noelle Frost was player of the game,” Meharg said.

However, it was Maryland that created the more dangerous of the chances, with junior midfielder Brooke DeBerdine making a clever run to get herself one-on-one with Hausheer. The junior wasn’t able to keep the ball down, though, as it sailed harmlessly over the crossbar.

[Read more: No. 4 Maryland field hockey gets back on track with 5-0 drubbing of Towson]

And after withstanding a few Virginia efforts, Maryland nearly found its breakthrough. Midfielder Madison Maguire flicked the ball underneath Hausheer with less than a minute left and it slowly rolled toward the cage, threatening to end the contest in the Terps’ favor. However, midfielder Adele Iacobucci dove and pushed the ball away from the goal, sending the game into its second overtime period.

The Terps continued to press on in double overtime. However, Hausheer was equal to them, making two saves. None was more impressive than her save on defender Bodil Keus, who stepped up to the penalty spot after Hausheer clattered into DeBerdine.

The junior fired a low driven shot that seemed destined for the bottom left corner of the cage. But Hausheer got down quickly, deflecting the shot away from goal and ensuring that a winner would be decided through a penalty shootout.

“[Hausheer] was outstanding,” Meharg said, “We weren’t anticipating that level … she really did a great job for them.”

And in that shootout, some 80 minutes of game time after the Terps and Cavaliers first began playing, Donraadt’s second tally in as many tries tipped the contest in Maryland’s favor for good.

“We’ve been doing pretty good but I think that after this game, we really saw our potential,” Frost said. “This is the moment we needed to propel ourselves further.”